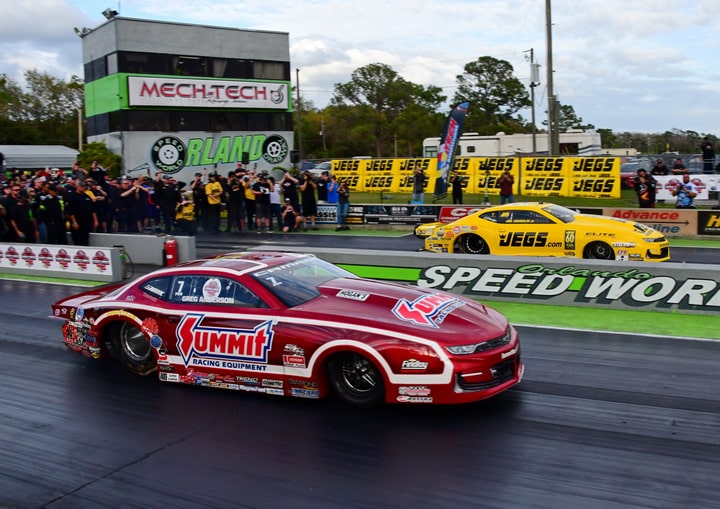 There were a ton of cars on the grounds for this first-ever event, with a hearty 18 Pro Stock entries leading the way. The independent contest also served as a tune-up for this coming weekend’s 51st annual Amalie Motor Oil NHRA Gatornationals up the road at Gainesville Raceway.

The Pro Stock winner’s $75,000 bounty went to Jeg Coughlin Jr., who announced at Pomona that 2020 will be his final year of full-time Pro Stock competition. Once he announced his departure, Coughlin won the Pomona race and went to the quarterfinals at Phoenix, after winning the 2019 season closer to secure second place in class standings behind teammate Erica Enders.

This past weekend, to secure the $75,000 winner’s prize, Coughlin beat a fouling Bo Butner, his nephew TJ Coughlin and teammate Aaron Stanfield. Greg Anderson, who’s had a hard time getting down the track in the first two NHRA races, defeated second-generation racer Kyle Koretsky, Australian Shane Tucker and his teammate Jason Line to meet Coughlin in the finals.

In the final round, Coughlin used a superior reaction time of .032-sec to barrel to a 6.484-second, 212.36mph quarter-mile run, ahead of Anderson’s .040 RT and his 6.485-sec, 213.81-mph speed in the duo’s 23rd Pro Stock final round competition. In every race he ran on Sunday, Coughlin showed why he’s a master on the tree, and why he loves these kinds of bracket races.

“I’ve been fortunate to run a bunch of big-money bracket races in my career and I’ve seen the organized havoc like this – and it’s just badass,” Coughlin said in the Winner’s Circle. “There’s no more prideful feeling than pulling around for a final of a big-money race, and this one is right there at the top with them now.”

Coughlin’s crew chief Rickie Jones, who’s picked up a Wally winner’s trophy of his own in Pro Stock was over the moon after the $75,000 victory. “To win this race is just huge. It was the throwdown of throwdowns, right there. Nobody was holding anything back. We were fortunate to come up on the right side of it; just an unbelievable job by the whole team.”

Even though he wasn’t the winner and now has an 11-12 deficit to Coughlin, Anderson understood the significance of the race. “I love racing Jeggie and we’ve had so many titanic battles every time. I respect the hell out of him and it’s just been a lot of fun for a lot of years. It was really a great weekend for Pro Stock,” celebrating the class’ 50th anniversary. “I think everybody that was down here enjoyed it.” 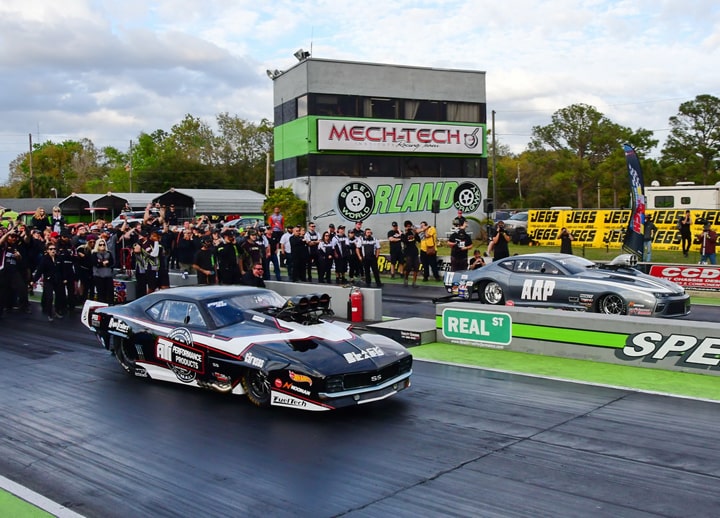 The Pro Mod nod and $50,000 went to Coughlin’s Pro Stock teammate Alex Laughlin, who won the class’ Indy race last year. Driving Marc Caruso’s Caruso Family Racing 1969 Camaro, Laughlin hadn’t even sat in the car before competition began. To get acclimated he had a few test passes, four rounds of qualifying and four elimination passes. With consistent reaction times, Laughlin qualified third, beat Jim Whiteley, got lucky in the second round when Sidnei Frigo slowed to a 10-second pass and pulled off a win over Michael Biehle in the semis.

Both drivers were aggressive in the finals; Tutterow got the RT edge with a .042 light over Laughlin’s .045 and it was even until Tutterow experienced tire shake, ultimately causing his supercharger to backfire downtrack, allowing Laughlin’s clean pass took the win.

“Man, Lee White is definitely an underestimated crew chief. The dude knows what he’s doing,” the driver allowed. Laughlin was the only racer competing in both Pro Stock and Pro Mod; he fell to his Elite Motorsports teammate Aaron Stanfield in the second Pro Stock round.

While there will likely be some testing at Bradenton before this weekend’s Gatornationals, the inaugural Doorslammers Nationals definitely had the Pro Stock and Pro Mod community excited – and hoping for a reprise next year.