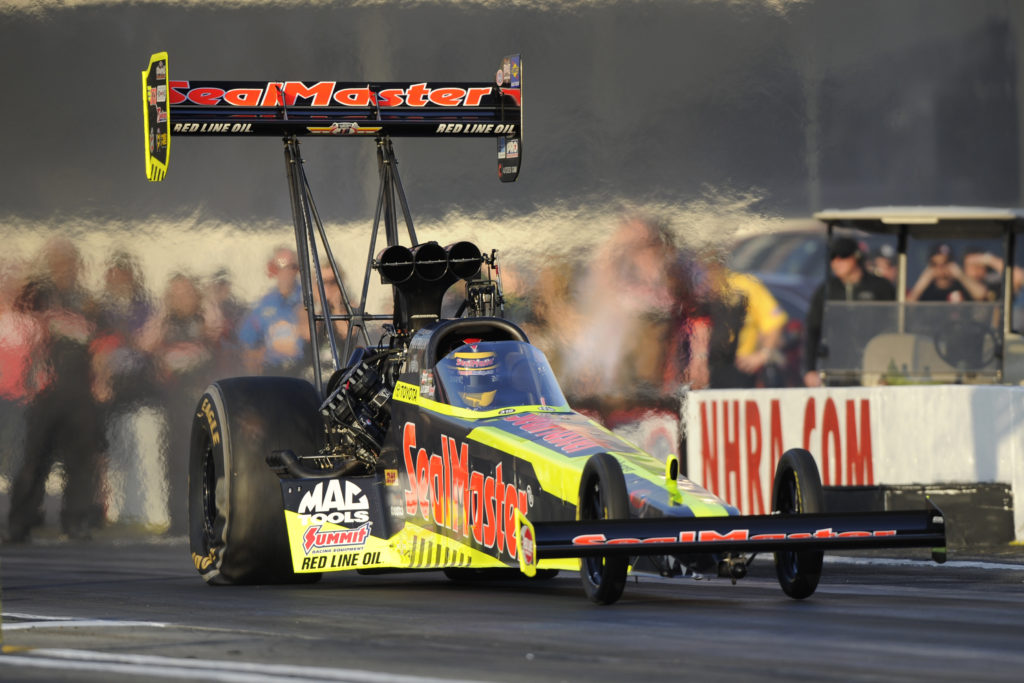 It’s been a wonderful summer for NHRA Top Fuel driver, J.R. Todd and his Kalitta Racing SealMaster dragster team. Reaching the finals in three of four races with a victory right in the heart of the regular season schedule, it looks like his focus could be career changing with 15 round wins in the last six races.

With NHRA’s biggest show, the Chevrolet Performance U.S. Nationals starting next week, the teams have had two days of testing. This event is clearly rising above all the rest with points and a half, the biggest purse, but most of all, it will determine the Top 10 in each Mello Yello professional category and J.R. Todd is right in the Top Fuel mix. 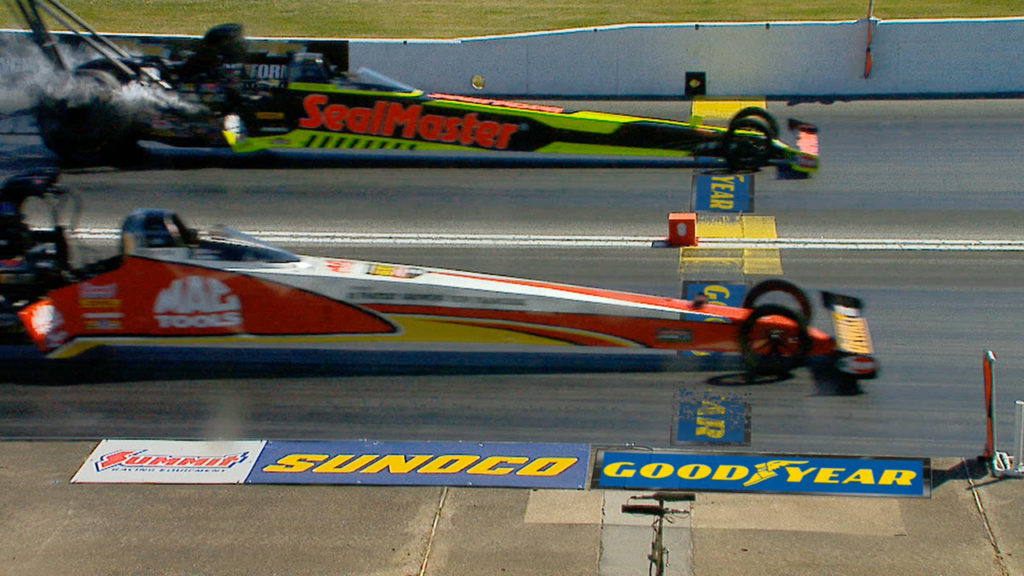 Although sixth in the standings, Todd’s season has been anything but an easy road getting up as high as fourth in the early part of the season and just when he was making strides in the spring, he lost a crushing dead-heat finish in Atlanta against his teammate, Doug Kalitta. From there, he lost successive first rounds and it wasn’t until the temperature got really hot, was when Todd came to the forefront to bring things to a boil.

“Early on, we lacked consistency more than anything,” said Todd, winner of nine NHRA National events. “We were struggling in qualifying and the name of the game in qualifying is if you can’t qualify in the top five or six, you just going to get a tougher draw first round. That was our case for our SealMaster team of just getting the wrong pick first round. We usually make our best shot of the weekend, but it definitely wasn’t’ enough to beat the car in the other lane. 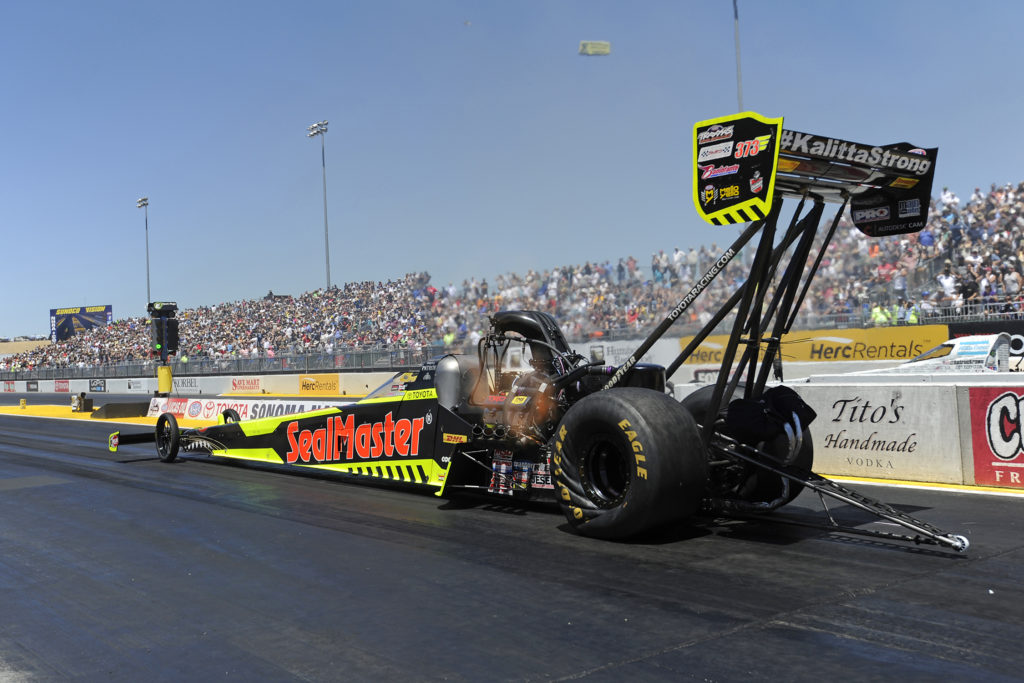 “For the last couple of months, we’ve been making some good runs, consistent runs in qualifying getting a better starting point and getting the right draws on race day. That helps make better passes in the long run and get those points we need to move up in the Top 10 for the Countdown.”
Looking ahead to the Countdown, Todd knows that it really doesn’t matter where he starts, but have a good swing in the first four races to build a lead, but the further back you are at the start means the more rounds you have to make up to cover the ground in the points.

“Honestly, I would like to be up as high as I can going into Charlotte,” said an optimistic Todd. “I would like to be fifth, but if we can maintain sixth, I would okay with that. In 2014, we were ninth going into Charlotte and ended up second leaving out of Pomona. I think the higher up you are the better your chances of winning that championship. I have nothing to complain about after the season we’ve had so far. I think we’re getting rolling about the right time minus last weekend in Brainerd.”
Never stopping in their search for time and speed, Kalitta Motorsports has a great race package and at Brainerd, the results didn’t pan out qualifying 10th and was in an experimenting mode to try some things before the Indy testing. 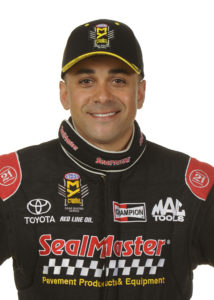 “Our performance was off at Brainerd and we’re definitely trying some stuff now to make sure we’re ready for the Countdown and right now we’re at the Indy test,” said Todd on Wednesday from Lucas Oil Raceway at Indianapolis. “We’ll run here today and tomorrow trying out different parts and pieces that we weren’t able to try. You don’t want to give up runs, I should say, in qualifying during a national event. That’s what makes it ideal to come here to Indy to try out those parts and pieces to give us the advantage and flip some big numbers in the U.S. Nationals and carry it on through the Countdown.”
“It’s great to have all of our team cars here with us. We’ve got the Mac Tools dragster and they’re trying some stuff too. Del Worsham is driving both the DHL and Patron cars. Some of the things we’re trying on our car are some of things that Del has come up with on his own. So, it’s nice having him here to help us out with those deals and I think it’s going to pay off in the long run.”

The added pressure of keeping momentum going in the Countdown, some drivers may be trying something new, but after his fourth adventure to the playoffs, he’s ready to attack the six-race series with a strong driving vigor.

“For me, I’m not going to change anything I do inside the car,” said the 2006 NHRA Auto Club Road to the Future award winner as the series top rookie candidate. “Just go up there and try to be as consistent as possible and do my job as best as I can. That way Connie (Kalitta, owner) and Rob (Flynn, crew chief) can tune the car around my driving. It’s not going to get any easier once the Countdown starts. That’s for sure. You have to get aggressive as you can on the tree. These cars are so close in performance now that a lot of runs and round wins are coming down to the driver at the starting line. That’s where you’ve got to step your game up and be aggressive. Yeah, man, it’s going to be an exciting Countdown I think.”

Nerves will never a problem for Todd as he had his U.S. Nationals indoctrination in 1993, at the age of 10 in a Jr. Dragster. Never before had he ever seen such a large crowd, especially watching him and was caught up in all the Nationals excitement wide-eyed and very impressionable at his young age.
“That was probably one the most nervous times I’ve ever been at a race before getting to run down the track,” he said fondly remembering the anxiety of getting up to the starting line. “It was an actual race. It was before we had Jr. Nationals then, it was the year prior, and so it was kind of an invitational deal only. I believe you had to win a track championship or lead your points at your local track. That’s how I qualified to get there. 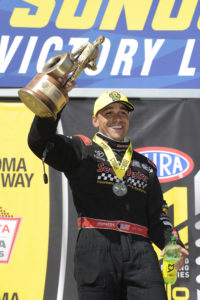 “I know I didn’t race very well and I was nervous as can be racing in front of a big crowd. Just parking in the staging lanes next to the race cars of Kenny Bernstein and John Force was a dream come true.”
As an Indiana native growing up in “The Lawrenceburg, Indiana”, as he calls it, just gives him even more incentive in getting his way to the top reaching the pinnacle of the sport with a ‘Big Go’ win in his Hoosier backyard.

“A majority of the drivers live here in Indy, I don’t that many that can say, they are from Indiana,” inquired Todd. “That would be a huge win for me in front of friends and family growing up and getting my racing started here in 1993. It would be a huge accomplishment, but you go out there and tell yourself that it’s just another race. You try not to get all over worked and get hyped up for it, but in the back of your mind you know what’s on the line and what’s at stake there Labor Day weekend.
Now for Todd, an U.S. Nationals victory would be spectacular, not only in the points he could claim, not even the money that he would take home, but it’s more about the Kalitta Racing ‘mosh pit’ and all of the celebration after the race if Todd could win on Monday.

“There might now be a section of the grandstand left after the race on Monday, if that was to happen, laughed Todd. “I’ve said before, that would be like winning a championship. That’s my ultimate goal in the sport is to win championships and the U.S. Nationals. They don’t look up in the history books too much to see who won Brainerd in 2016; but they will remember who wins Indy this year. I would like to etch my name on there for sure.”
The Chevrolet Performance Nationals start on Wednesday at the Fan Fest and Traxxas Shootout drawing in downtown Indianapolis at noon. FOX Sports 1 will air their first show on Sunday, Sept. 4, at 2 and 5 p.m. ET with qualifying coverage with all day LIVE coverage starting on Labor Day Monday at 11 a.m. ET on FOX Sports 1 followed on the FOX Network starting a 1 p.m.