RacingJunk News > Racing > Drag Racing > Is This the Start of Championship Six for Jeg Coughlin Jr.? 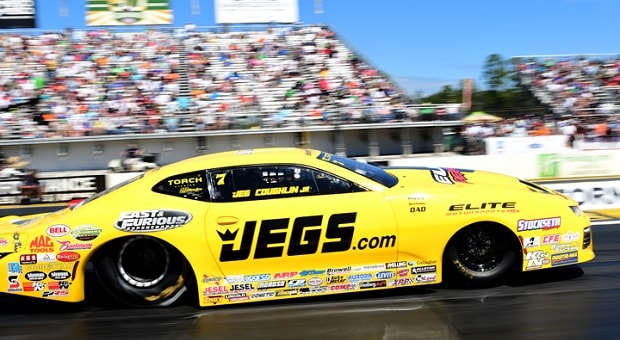 From 2014 until this season, NHRA’s Mello Yello Drag Racing Series Pro Stock racer Jeg Coughlin Jr., a five-time class champion, was in a slump. A real slump. Coming into the 2018 24-race campaign, the driver of Elite Motorsports’ bright yellow JEGS Chevrolet Camaro SS had recorded his most recent PS victory at Englishtown, New Jersey in 2014.

True, Jeg Coughlin Jr. did take some time off from Pro Stock and yeah, Elite transitioned at absolutely the wrong time from Chevrolet race cars to Dodge Darts – and back again – but this is a championship driver and one who, entering the 2018 season, owned a total of 58 Pro Stock Wally winner’s trophies. He just hadn’t had the kind of results both he and the team expected.

The magic appears to be back this year. Coughlin Jr, 48, celebrated his second Pro Stock victory of the season at this past weekend’s Fitzgerald USA NHRA Thunder Valley Nationals on Bristol Dragway’s quarter-mile strip. The first came at the JEGS Route 66 NHRA Nationals at Joliet last month. Coughlin Jr has been sneaking up on these two victories, qualifying well and going rounds. Until recently, though, it wasn’t enough.

Bristol was one hot race that challenged all tuners in the paddock and caused many exceptional racers to have difficulty with the dragstrip. In fact Coughlin’s first-round opponent, Tommy Lee, wasn’t able to make the call after his massive accident in Saturday qualifying, essentially giving the Ohioan a first-round bye. Coughlin got lucky a second time when Chris McGaha barely made it down the track in quarterfinals, and a third when Drew Skillman fouled in the semis, leaving the No. 2 qualifier the challenge of beating No. 1, Greg Anderson. 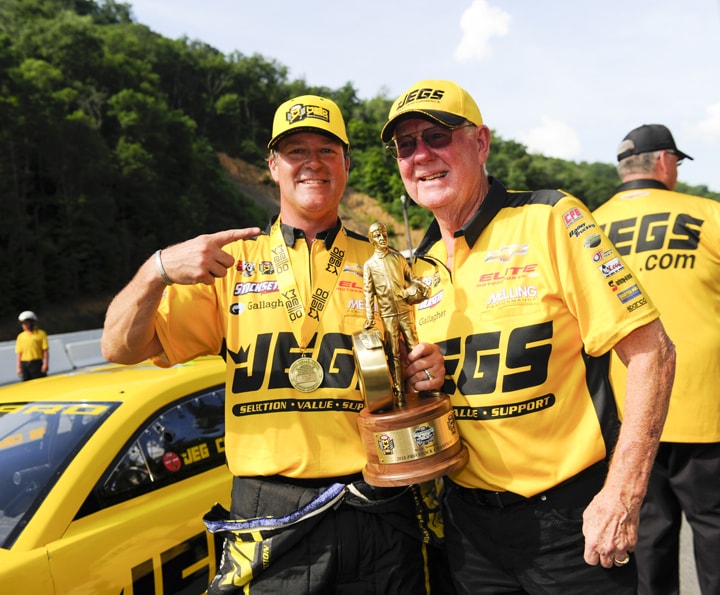 Coughlin drove a fourth lap in the 6.7-second range to beat Anderson, using better reaction time and leading with lower elapsed times the entire way down the quarter-mile racetrack, earning the 6.709-sec nod over Anderson’s 6.741. They were just .03 mph apart at the finish line. It was a perfect way to spend Father’s Day with his father Jeg.

“It feels great and is a testament to our team,” Coughlin said after vanquishing Anderson who, despite earning his 100th No. 1 qualifier, still hasn’t added to his 90 Pro Stock victories this season. “We showed our way right to the checkers in Chicago,” Coughlin added, “and then came back here in Bristol with another win. It felt fantastic from behind the wheel.” Only Coughlin Jr., Tanner Gray and Vincent Nobile have recorded two victories in the first half of this season.

“Rickie and Rick Jones and the entire Elite team today figured out the track extremely well. Our car was fast three of the four rounds and had lane choice against Greg [Anderson] in the final round. It felt fantastic,” he revealed. “I let the clutch out, I hit the tree pretty well and I thought, ‘C’mon baby, hit the finish line first.’ Thanks to everybody on the Elite crew.”

Although he didn’t win at Pro Stock in Dinwiddie, Virginia a week earlier, Coughlin Jr. did take the Wally in NHRA’s Lucas Oil Sportsman Super Comp class at that venue. Combined with his win at Chicago and victory in Bristol, that’s three race wins in a row. “It has a nice ring to it. Since we’ve made some transitions in the team, we’ve been really fast.

“[Teammate and two-time champion] Erica (Enders) and I both have been really fast. She has been in four final rounds and this is my second final and second win in just a few weeks. The Super Comp win at Virginia was satisfying as well. To win here at Thunder Valley feels fantastic; it’s a historic place. I remember coming here in the ‘80s as a kid. To be able to be crowned the champion here feels fantastic. The Elite team really gave me a great car.” 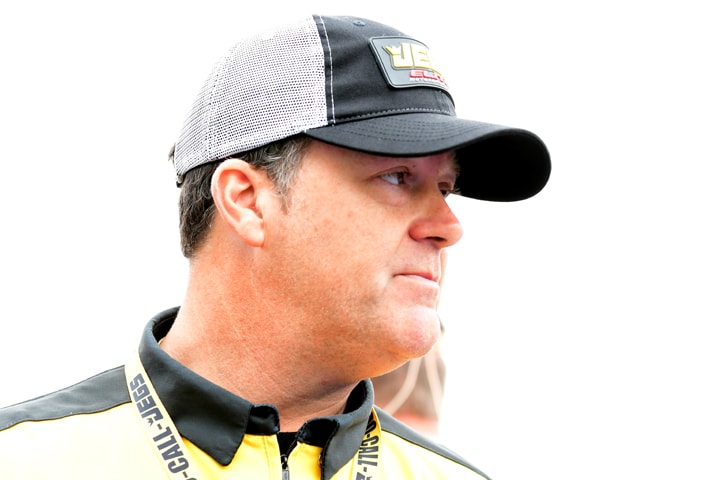 The amount of time between his most recent NHRA Pro Stock wins and those that came before – a span of nearly four years – never really upset this very competitive man. Coughlin Jr. hoped and intuitively knew it would turn around at some point. “There was a lull having a couple of years between wins, but we’re true competitors as a team,” he said of the Elite Motorsports crew. “It’s been fun to see that tide turn for us. We still have a couple things to check off our box to reach our ultimate goals.”

Jeg Coughlin Jr. and the balance of the Pro Stock community – “There’s 15 or 16 Pro Stockers out there that want to decapitate me without question” – get another chance to race for trophies, points and honor on a fourth consecutive weekend as the NHRA tour moves to Coughlin Jr.’s home state of Ohio for the Summit Racing Equipment NHRA Nationals in Norwalk. Is Coughlin Jr. en route to his sixth Pro Stock championship? Or is it too early to tell?