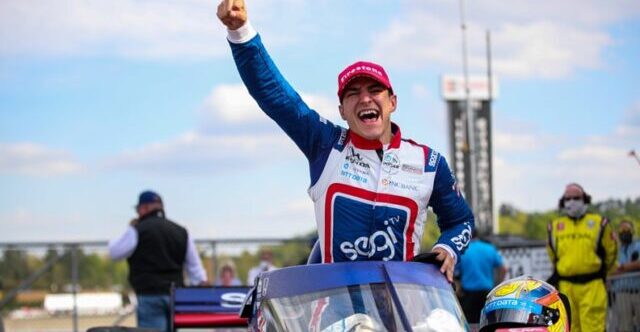 Over the course of two weeks, the NTT IndyCar Series has conducted two races: one on a permanent road course (Barber Motorsports Park outside Birmingham, Ala.) and this week’s contest on the streets of St Petersburg, Fla. The only constants in the results is that a Honda-powered racer was first to the checkered flags in both races and it was a youthful driver in Victory Lane.

In the first race, second-year INDYCAR racer Alex Palou, 24, from Barcelona, Spain – and living in Austin, Texas – earned his first career Indy car victory in the No. 10 NTT Honda from Chip Ganassi Racing. He led 56 of 90 laps in the Honda Grand Prix and kept veterans Will Power and Scott Dixon, the reigning, six-time champion behind him. Massive contact on the first lap removed former champs Josef Newgarden and Ryan Hunter-Reay, and hobbled second-generation racer Colton Herta, who finished only 25 laps. 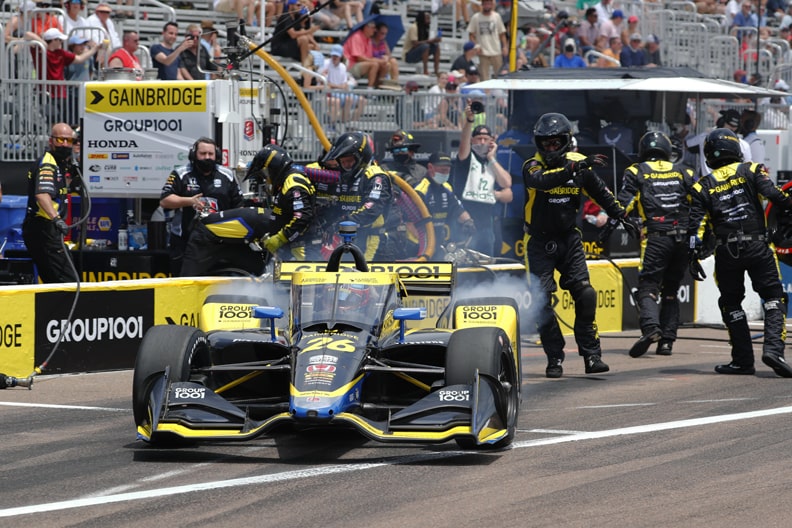 Herta, now 21 and in his third season, earned his fourth INDYCAR victory in the second contest, after leading all drivers in qualifying and race-day warmup, as well as pacing a race-record 97 of 100 laps en route to victory in the Firestone Grand Prix. The Andretti Autosport racer showed dominance even when faced with a late caution – of three total for only nine laps – and with Newgarden using every wile he had to try and snooker Herta. It was a show of talent, determination and poise that most 21-year-olds could never master. Herta did. And he succeeded in monstrous heat and humidity, where all drivers looked absolutely whipped as they exited their cars. 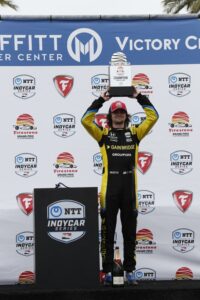 Palou’s victory, with a margin of less than half a second, came with five lap leaders and 10 exchanges of the top spot; Herta had nearly two-and-a-half seconds in hand when the twin checkers flew. Newgarden tried to overtake after the third and final caution period (for contact between returnee Ed Jones and James Hinchcliffe), got within half a second but faded at the close. Still there were 16 cars on the lead lap and only two retirements.

Johnson is still finding his way and was the reason for the two other cautions in Florida. The seven-time NASCAR champion, now 45, won’t be seen again until Indianapolis’ first road-course contest next month, as he has elected to run only road and street courses in his first season of open-wheel competition. It takes time to get the hang of these cars; Johnson could benefit from some time on simulators but, sadly, nothing simulates racing like racing.

Drivers to watch as the series heads for Texas next weekend for doubleheaders on the 1.5-mile oval include the two young race winners, but also some drivers who have been expected to perform well, like Team Penske’s Will Power, who spun himself into a P20 start at St. Petersburg and still came back to finish eighth. The Australian has come to love ovals and he’ll get three chances to show his prowess over the next month.

Defending Indianapolis 500 winner Takuma Sato (Rahal Letterman Lanigan Racing Honda) raced from 19th to 13th at Barber and barged through the field on the street/airport St. Pete circuit for a sixth-place result after qualifying 15th. Dixon quietly finished fifth at St. Pete after his podium result last weekend and will be a force, no matter which youngster tries to usurp his title reign. Four-time champ Sebastien Bourdais showed his hometown fans he won’t be halted easily in the No. 14 A.J. Foyt Racing Chevrolet, which has to please the irascible Texan.

Now in their second year as a full-time INDYCAR entrant, Meyer Shank Racing’s Jack Harvey took the No. 60 Honda-powered Dallara from second on the grid to fourth at the loose of the St. Petersburg race, after an 11th place result the week before. And anyone who thought Palou’s Alabama win was an anomaly, the Spaniard did set fastest lap during this weekend’s St Pete contest. The fanfare accompanying Arrow McLaren SP Racing and its drivers Pato O’Ward and Felix Rosenqvist has resulted in a pole (and fourth place result) for O’Ward in Alabama and 19th (from sixth) in St Pete; Rosenqvist was out by contact in Alabama and took 12th on Sunday, but both they and their team will show better as the season progresses. 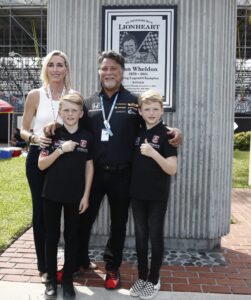 Probably the biggest, best INDYCAR news occurred this weekend in St Petersburg and it had nothing to do with those racing in the current NTT IndyCar Series. Rather, it was the announcement that Andretti Autosport’s development program is embracing the emerging careers of brothers Sebastian and Oliver Wheldon, whose father Dan was slated to rejoin AA for the 2012 season before his life was taken at Las Vegas Motor Speedway in the 2011 season finale.

Brought on as junior drivers, Andretti Autosport will mentor the duo, who carry the AA shield into three national level karting series: Rok Cup USA, Super Karts USA and United States Pro Kart Series. Sebastian and Oliver Wheldon currently race with JC Karting and will receive oversight and career guidance from Michael Andretti and the Indianapolis-based Andretti Autosport team. “I am so grateful to Michael for taking Sebastian and Oliver under his wing,” said Susie Wheldon, who is raising the two boys on her own, albeit with plenty of love from the racing community. “The junior ranks of racing are so difficult to navigate, and to have the support of Andretti Autosport’s engineering resources will, I’m sure, make all the difference.”