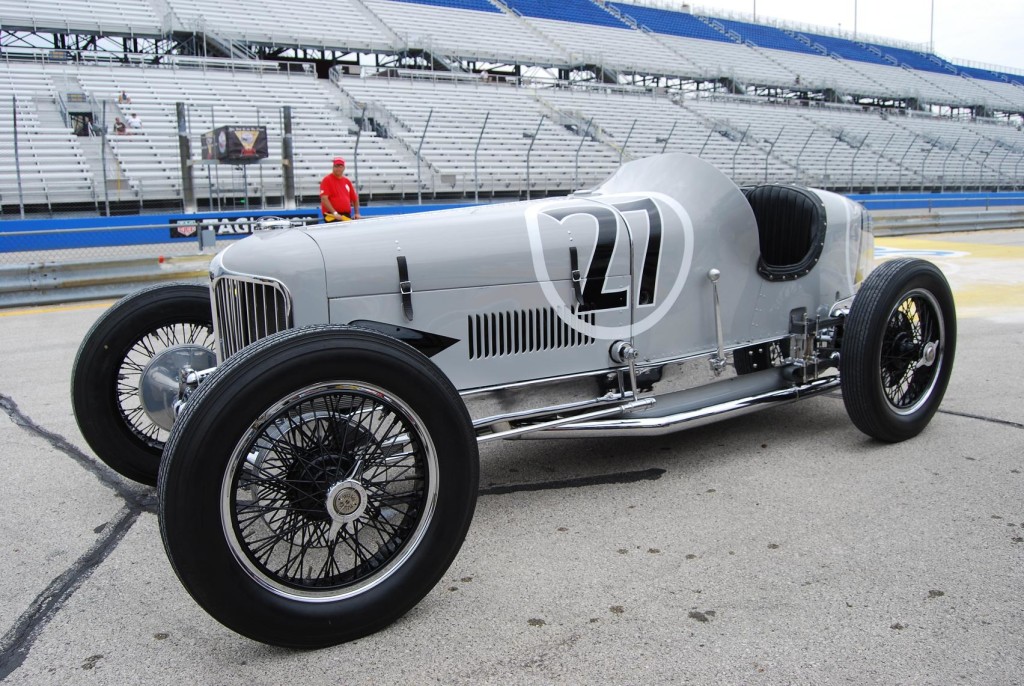 It was a case of Vintage Indy Car Event meets Indycar Race at the Milwaukee Mile on July 10-11.  Twenty-eight historic cars came to the historic track, but they didn’t exactly have the run of the place as they do other years.  That’s because an actual Indycar race was scheduled to kick off hours after the vintage event ended.

Organized by the Harry A. Miller Club*, the annual “Millers at Milwaukee” event changed its regular format for one year.  And a lot of things were different, from spectator parking to hitching golf cart rides up to the pit area.

None of this took away from the high impact gathering of Miller racing cars, vintage Indy Cars, and assorted other pieces of racing history.  There were 11 Millers in the limup including Dana Mecum’s bray No. 27 Miller V-16 and Terry Castle’s blue No. 2 1920 Tommy Milton Durant Miller.  Bob Dyson’s red and white 1927 Miller “Boyle Valve Special” came all the way from Poughkeepsie, NY.  It wore No. 15.  Jacksonville, Florida’s Dan Davis brought two Millers.  His 1923 Miller 122 GP car was painted black and wore No. 1 while his 1930 Sampson U-16 Miller was finished in white and had No. 4.

Other show stealers were the 1952 John Zink Special owned by Mike Bauman, the 1963 Watson roadster of Robert Dicks, the 1960 Joe Hunt Magneto Special of Joe Freeman, and Bob McConnell’s 1962 Watson roadster, which is finished in blue and wears No. 7.

Other racing cars on track ranged from Donald Wright’s 1929 Model A Ford racer (black, No. 108) to Eric Anderson’s 1932 Hudson Martz Special, which is painted red and wears No. 29.

The 22nd annual Millers at Milwaukee/Vintage Indy Car Event will take place July 8-9, 2016 at a Milwaukee Mile that will be a bit less hectic.  But if you loved racing old and new, the 2015 event was one not to miss.