Canadian James Hinchcliffe, the winner of six NTT IndyCar Series races throughout his career and pole sitter for the Indianapolis 500’s historic 100th race in 2016, has been languishing on the sidelines since being dumped by the reincarnated Arrow McLaren SP Honda-backed team late last year.

The Mayor of Hinchtown, whose personality often dwarfs his on-track exploits, has had financial backing to race this year from Genesys, a technology company dedicated to customer cloud experiences, since January 16th. The issue has been finding a team that has space for him – preferably a Honda squad – so that Hinchcliffe could race in 2020.

It’s all come to fruition for Hinchcliffe, who returns to Andretti Autosport this year for three important races that occur in early spring. He’ll be driving a No. 29 Honda in the GMR Grand Prix on the Indianapolis Motor Speedway road course, in the 104th Indy 500 and the Texas 600 on the 1.5-mile Texas Motor Speedway oval in early June.

“We are really pleased to be able to welcome James back into the Andretti team,” noted Michael Andretti, Andretti Autosport’s chairman and CEO. “He has, for sure been knocked down a few times by this sport, and to be able to help him meet the challenge is really special. We had a lot of fun, and some great successes with James when he was part of the team before, and we’re really looking forward to picking up where we left off.”

Hinchcliffe has, to date, made 139 INDYCAR race starts, and from the 2012-2014 seasons, conducted those with Andretti Autosport, collecting three victories, 15 top-five results and nine front-row starts, including twice sitting on the famed front row of the Indianapolis 500 on the Brickyard’s 2.5-mile oval. 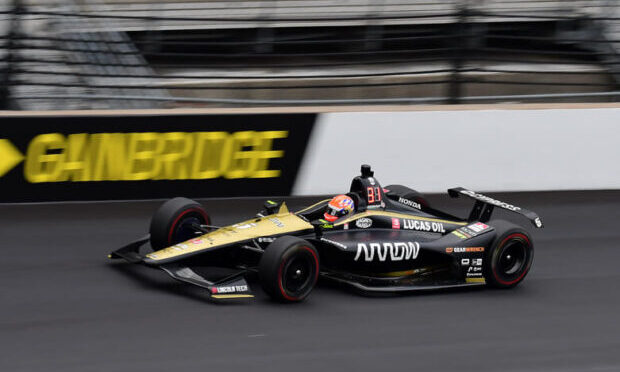 The No. 29 Honda takes on the orange, white and charcoal colors of Genesys, which has a major employee presence in the Indianapolis area, together with 60 worldwide offices. The company’s thrust is to aid organizations worldwide connect more than 70 billion customer moments each year, using voice, text, messaging apps, web chat and other social media.

Michael Andretti lauded the emergence of Genesys as an INDYCAR partner, as he noted there are three Indianapolis-based companies in his team’s portfolio. “We’d like to welcome Genesys to the Andretti family for their first experience in INDYCAR racing,” he said. “We are looking forward to working with James and the Genesys team to deliver both on- and off-track success.”

Hinchilffe joins five Andretti Autosport teammates for the 104th Indianapolis 500: Alexander Rossi, Ryan Hunter-Reay, Colton Herta, Marco Andretti and Zach Veach. “Honestly, it’s so nice being able to announce some more good news,” Hinchcliffe said. “It’s no secret that the 2020 season isn’t going to be exactly what we were expecting, but being able to start the new year with the announcement that Genesys was stepping in to save our season and partner with us was awesome.

“Now adding the next big piece in my reunion with Andretti Autosport just really makes it feel like the momentum is going our way,” he added. “I can’t wait to work with this group again and to get back behind the wheel of an Indy car.”

Hinchcliffe missed the Indy 500 in 2015 following an injurious practice crash the Monday after qualifying; he was unable to qualify for the race in 2018 and made a last-row start last year, finishing 11th from 32nd on the 33-car grid. He’s hoping to run his eighth Indy 500 race this May.

The GMR Grand Prix opens the Month of May on May 9, while preparations for the Indy 500 begin on May 12th, leading up to qualifying May 16-17 and the 104th running of the Greatest Spectacle in Racing on Sunday, May 24th.