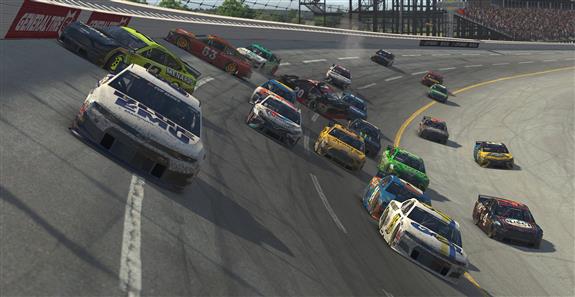 The final few laps were action-packed. Bowman’s margin of victory was a scant .037-seconds over runner-up LaJoie and .038-seconds over third-place finisher Ryan Preece. Garrett Smithley and Landon Cassill rounded out the top five.

“I guess just right place, right time, kind of the normal speedway racing deal,” Bowman said afterward, noting “I’ve really got to thank Preece for pushing me because that’s what made the difference at that point.”

His Hendrick Motorsports crew chief Greg Ives congratulated Bowman noting Sunday’s virtual victory was technically Bowman’s second trophy on the 2020 season because Bowman won at California’s Auto Club Speedway in March – before the schedule was put on a safety hold as the world deals with the COVID-19 pandemic. 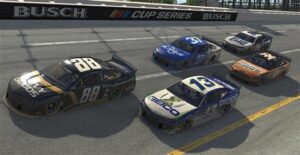 “Two wins on the season – one virtual and one real,” Ives said on Twitter. “As far as momentum, we’ll take it any way we can.”

The race seemed pretty wide open for a while, there were 14 leaders and 27 lead changes in Sunday’s 74-lap overtime race featuring a full field of 39 cars that included NASCAR Hall of Famer Jeff Gordon’s virtual debut. The six-time Talladega NASCAR Cup Series winner was running among the top five early in the event, impressively making his way up through the field after a 29th-place starting spot.

But an accident among the frontrunners, involving then-leader Ricky Stenhouse Jr. and Ty Dillon caused the first of Talladega’s well-known multi-car accidents or the “Big Ones” – as they are affectionately dubbed. The damage done to Gordon’s famed No. 24 Hendrick Motorsports Chevrolet required a “reset” going forward, giving Gordon a new car but put him in the back of the field. He was caught up again in a late-race multi-car accident, ultimately finishing 38th but remained all smiles on the FOX Sports broadcast where he traditionally handles the color commentary duties.

“It’s incredibly realistic,” Gordon said of his debut, adding “I loved being a part of it, it was great being back in there in the action and competition on the track. I had a blast.”

This was unlike the past few where Byron really dominated, this race had a real competitive feel.

Team Penske’s Brad Keselowski and NASCAR Cup Series rookie John Hunter Nemechek led the most laps on the day – 11 each. Keselowski, who earned his very first NASCAR Cup Series victory at Talladega back in 2009 and has five wins there, finished 19th after being collected in a late-race Talladega pileup. Nemechek finished 25th in his No. 38 Front Row Motorsports Ford.

Dale Earnhardt Jr, whose six Talladega wins ties Gordon for most in Sunday’s iRacing field, ran among the front pack at various times – even leading two laps – but he also collected in one of the multi-car melees and finished 30th.

Pit strategy certainly worked in Bowman’s favor – the fortunate timing of the cautions something he acknowledged after the race. He, LaJoie, Preece, Smithley, Cassill, Dillon and Byron provided all the dramatic feels fans are accustomed to in a wild, take-what-you-can-get finish – complete with wild wrecks back in the field.

Bowman conceded that he isn’t as experienced at iRacing as so many of the others he competes against in this series and admitted the whole overall strategy change – no team orders – was also a new dynamic.

“It was kind of a weird race for us just with how we didn’t get fuel under that first caution and then had to pit earlier under green and was kind of going to put us in a really bad spot, and the cautions kind of saved us.”

“Just glad to be able to get a win,” Bowman said. “You know, it’s good for everybody with Chevy Goods on the car and it’s good to have some momentum. You know, obviously the season was going really well for us in real life, and then as we got into this virtual deal, had some ups and downs, but to get a win is really cool.”

The next eNASCAR iRacing Pro Invitational Series race is set for Sunday, May 3 at virtual Dover International Speedway.