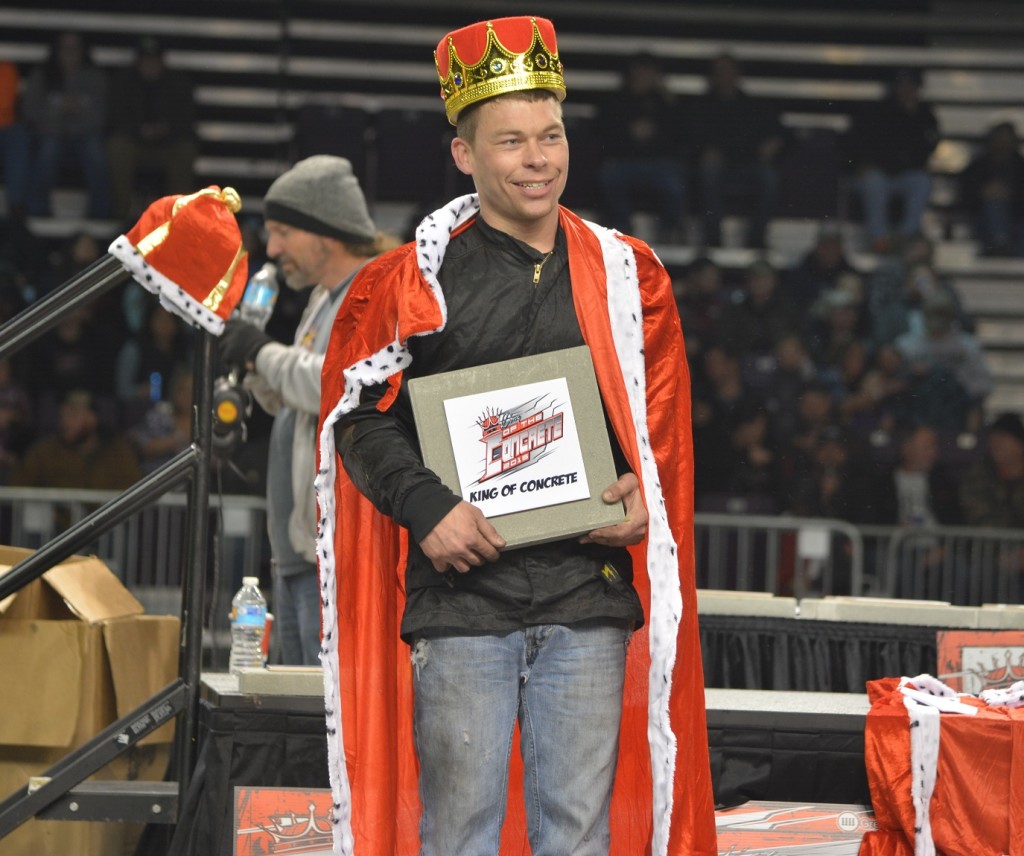 While many are waiting with anticipation to find out what kind of holiday gits they will receive this year, Frankfort, KY native Brandon Dunn and De Graff, OH native Chelsea Purtee received their presents a little early on Saturday night after being crowned the 2015 King and Queen of Concrete.

After starting in the 7th position for one of the most prestigious national championship kart races of the year, Dunn’s No. 21 didn’t prove to be a dominating car throughout the 50 lap flat karts pro class feature. In fact, the No. 40 of Brady Penny set a new qualifying record with a top speed of 5.647 seconds on the sticky Coca-Cola laden short track.

Although, having one of the fastest cars in the field, Penny would lose his lead by lap 15 of this 50-lap race to fellow King of the Concrete hopeful and second place qualifier Alex Krohn. Krohn would continue to dominate this field until the half time, refueling stop break on lap 25.

After spending some time getting ready for part two of this 50 lap race, Krohn would seem to have found the right combination as this race got back underway. That is until the final few laps of this race, where Krohn would lose control of his No. AK27 kart and find himself veering into the tire wall and collecting past legendary King of the Concrete winner Bob Baker in the process. 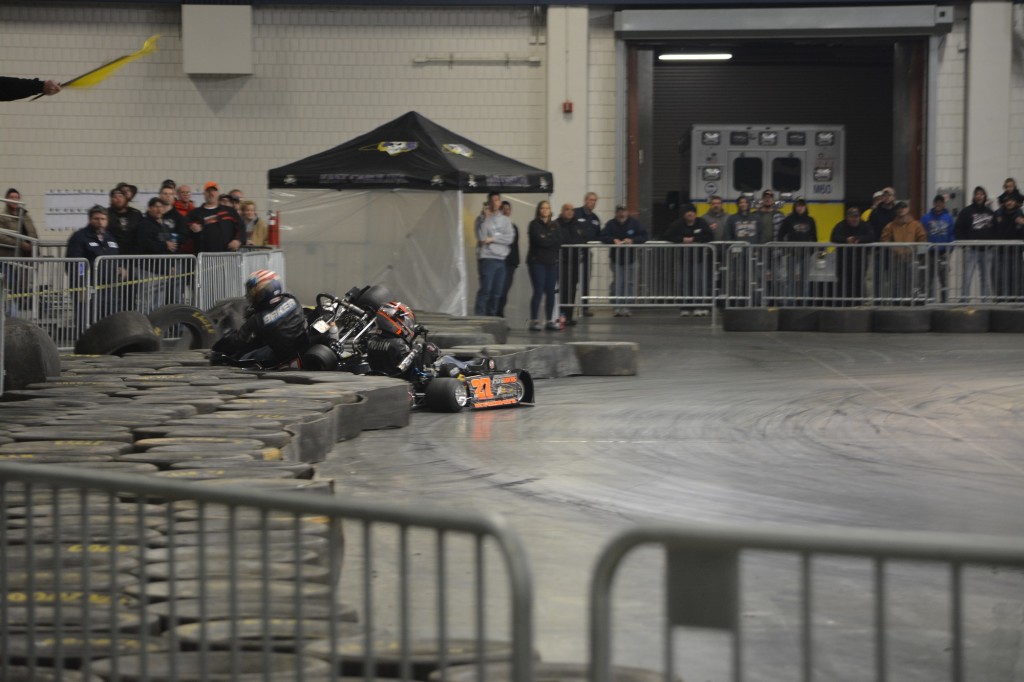 “The G forces on your neck and upper body here are extremely harsh,” said Krohn. “The fatigue I was feeling along with the fact that the right rear tire was feathering pretty bad, I just couldn’t hold onto it.”

Along with ending his chances to take the crown, Krohn wasn’t the only one who saw his hopes diminishing after this accident. Veteran King of the Concrete winner Bob Baker had also informed his fans prior to the start of this race that this would be his final try to capture what has been an elusive win for him over the last few years if he were to become the 2015 King of the Concrete winner.

“Unfortunately, Alex got loose and didn’t intend to end my night along with his, but we were both feeling the extreme fatigue that you would expect from competing all weekend long,” said Baker. “I guess I will just have to come back and try again for this title next year.” 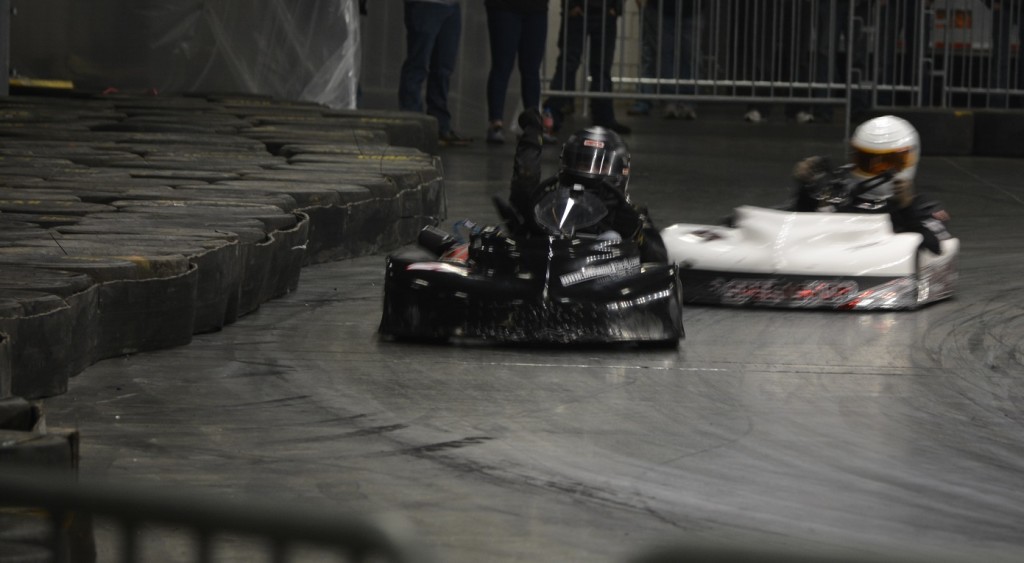 Although both Krohn and Baker would see their nights end without a title, first time competitor Brandon Dunn would claim the title after taking out the No. 96 of Dustin Heath on the final lap and crossing the finish line with his hand held high.

“I got really lucky,” said Dunn. “We had a really good kart, but only qualified seventh. Fortunately, I continued to improve my short run speed and the caution coming out with three to go gave us a chance to catch up to the then race leader Dustin Heath. I guess he didn’t know that I was coming up beside him, which is why he cut across me and ended up spinning behind me. All in all, I got what I came for and this feels incredible!”

Although Dunn didn’t pick up the $10,000 win due to winning only the flat kart King of the Concrete feature and losing out to Phillip Schneider in the champ kart class race, both drivers picked up a big pay day of $3,000.

While Dunn celebrated his crowning glory in the pits, the tough ladies of the flat kart pro series would have their opportunity to vie for the equally prestigious Queen of the Concrete crown.

While most of the 20 lap race would be led by the No. 2 kart of Amber Burchett, the No. 27 of second place starter Chelsea Purtee would not only catch up to the fast moving No. 2, but would leave it in the wall on the final lap to take the win. 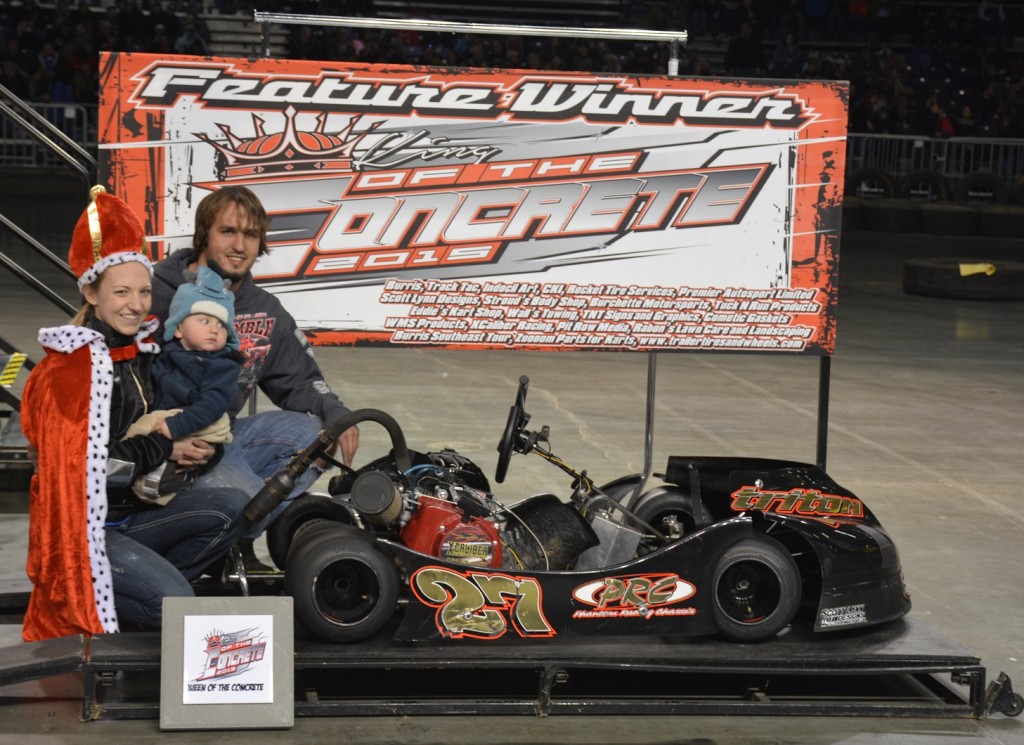 “It was a tough race,” said Purtee. “I knew that I had to get by Burchett if I wanted to get my first Queen of the Concrete title so I did what I had to do.”

After a year off from kart racing since she was 7-years-old, who could blame this brand new mother for going after a title she has wanted ever since she was a little girl?

As we wrap up our racing coverage for the holiday season, we at The Burnout wish all of our fans a very Happy Holiday season and we look forward to starting a New Year with all of you.

About Ellen Richardson 479 Articles
Ellen Richardson is the author of Behind The Wheel for RacingJunk.com. This automotive sports junkie has a passion for telling an athlete's story while also covering various racing activities. Find out more about her at ellennrichardson.wordpress.com or follow Ellen on Twitter at @ellennrich or Instagram at elnrich33.