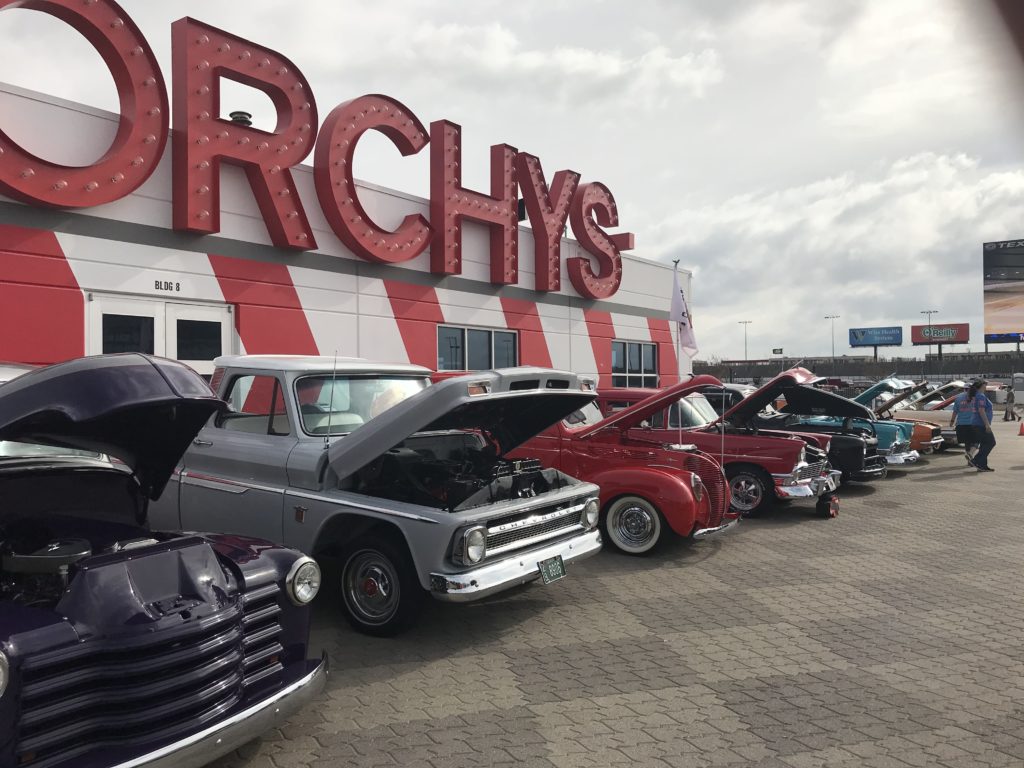 Entering the Texas Motor Speedway, you pass a sign that says “No Limits, Texas.”  While the sign is intended as a mic drop for the high speed raceway, it also served as a great intro to the Goodguys 2018 season opening in Ft. Worth, Texas.

The Goodguys’ 8th Annual Lone Star Nationals kicked off the show season on March 9-11 with new autocross competitions, new awards, the anticipation of a new event in October, and most excitingly, the new Goodguys’ eligibility requirements.  With the move to allow in cars from 1987 and earlier (changed from 1972 for every event except the 32 West Coast Nationals in Pleasanton, CA), Goodguys expects to see more vehicles and more attendees who want to celebrate the glory of the custom automobile.  This certain seemed to prove true in Ft. Worth with nearly 2500 cars on display during the weekend, including the square-bodied trucks, Fox-body Mustangs, and 3rd Gen Camaros allowed in by the new rules.

Also new this year is the AutoCross Saturday shootout.  The 16 best competitors from the Friday and Saturday autocross event qualify to compete for the show’s champion auto cross title, in this case, the Tremec Lone Star Shootout. Congratulations to David Lousteau from Hot Springs, AR who expertly maneuvered his ’65 Factory Five Cobra to victory (while also winning the Street Machine class).

A hot rodder’s Nitro Fest sponsored by FuelCurve.com and a burnout competition also gave spectators some additional thrills, while the Texas Motor Speedway’s normal role as a NASCAR track also came into play with team Texas ride-alongs and the Saturday evening Track Cruise for rodders who wanted to take their rides on some high-bank action.

Each Goodguys event also celebrates a local car club, giving them a special area to display their vehicles.  The Spring Lone Star Nationals featured the Mad Dog Car Club, which is based out of nearby Keller, TX.  The original “Mad Dog” himself, Mike Dodson, and club founder Donny Bright were on hand to talk about the work the car club does to raise money for the Down Syndrome Partnership and the Cook Children’s Medical Center and to support the Green Beret Foundation, including Connor’s Car Show and a calendar featuring members vehicles.

The Ft. Worth event doesn’t just attract local enthusiasts however. People come from all over to display their vehicles and to see the work others have put in to rebuild, or in some cases, maintain their rods.  Alan Stein of Pleasant Plain, OH drove his 1940 Ford for twenty-four hours straight to attend the show (last minute repairs meant he got a bit of a late start) and will continue on to display at the 9th Spring Nationals in Scottsdale, AZ March 16 – 18 before heading back home. The 4500 mile journey is something Alan is confident his ’40 Ford, with it’s new brakes and brake lines can accomplish.  He’s had the car for 25 years, so he certainly knows the ins and outs of it!

Ultimately, a Goodguys’ show is a chance to recognize excellence in the building, customizing and displaying of classic, beloved vehicles and what better way to do that then to present a Builder’s Choice award?  KC Mathieu of KC’s Paint Shop in Ft. Worth, a shop known for it’s commitment to bringing modern power to vintage rides while retaining their classic looks, was chosen to select 10 award winners from the designated Builder’s Choice area.
KC’s Paint Shop Builders Choice Awards
1932 Ford 3 Window  – Tim & Kim Wilson Poteau, OK
1968 Chevy Suburban – Brandom Sisco Scottsdale, AZ
1985 D350 Dualie – Humberto Ortiz Lubbuck, TX
1956 Ford Sunliner – Jack Benge Topeka, KS
1937 Chevy Coupe – Hank Miller Midlothian, TX
1961 Chevrolet Convertible – Mike & Carrie Swanson Yorba Linda, CA
1966 Chevrolet Pick Up – Marshal Banks Magnolia, TX
1970 Chevrolet C-10 – Stone Andrews, TX
1963 Corvette Split Window – Mike Lawson Andrews, TX
1966 Chevy Chevelle – Tommy Angelle Katy, TX
In addition, two vehicles were chosen as Car of the Year finalists for the 2018 season: Larry Knebel’s 1970 GTO for 2018 Muscle Car of the Year Finalist sponsored by MSD and Son & Debbie Freeman’s 1957 Chevy Bel Air 2018 Custom Rod of the Year Finalist sponsored by Vintage Air.
Congratulations to all of the winners, participants and the attendees who got to enjoy great weather, a terrific atmosphere and the best that the rodding world has to offer.
About Andreanna Ditton 194 Articles
Andreanna Ditton is the Content Manager for MotorHead Media and the Editor-in-Chief for RacingJunk.com/news. She's been working in the automotive publishing industry since 2007 focusing on racing and performance for motorcycles and cars.