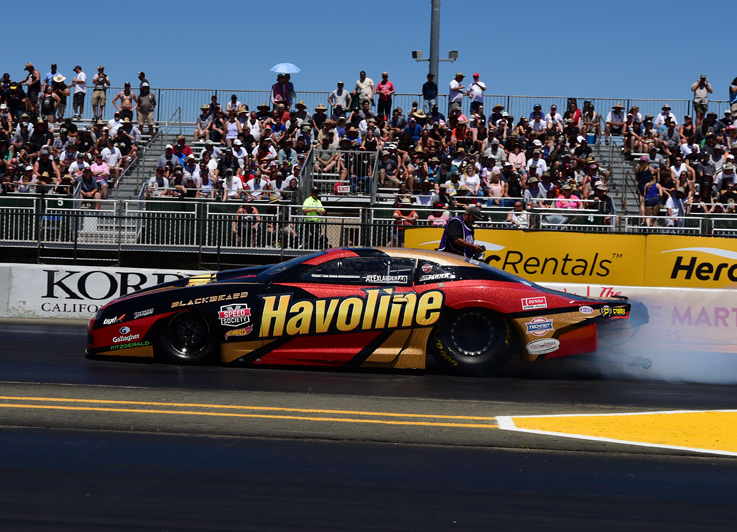 There’s a lot of stake for Top Fuel, Funny Car and Pro Stock competitors – Pro Stock Motorcycle is on hiatus until the 65th Chevrolet Performance U.S. Nationals outside Indianapolis on Labor Day weekend. While Top Fuel is wide open with nine spots available in the 10-driver Countdown playoffs, it’s a lot tighter in Funny Car and Pro Stock.

John Force Racing’s (JFR) Robert Hight, who has led the Funny Car standings since the start of the 2019 season in his Chevy Camaro is hounded by company owner and 16-time champion John Force, who is 186 points behind Hight in the standings and has visions of a 17th title in his head.

Fully six drivers are qualified for the Countdown, with Don Schumacher Racing’s (DSR) Tommy Johnson Jr. (-224 points), five-time Brainerd winner Ron Capps (-284) and Jack Beckman (-302) holding down third through fifth places with their Dodge Charger SRT Hellcat floppers. Double 2019 race winner Bob Tasca III, whose Ford Shelby Mustang team is located at DSR’s compound holds down sixth place and is 356 points behind Hight, the final driver current locked into the Countdown. These numbers could and should move during the upcoming two races.

Behind these six are at least five racers who have visions of making the Countdown, starting with another two-time winner this year, DSR’s Matt Hagan. Hagan’s season hasn’t been as consistent as he’d like, which explains his status as the sole DSR driver not yet qualified for the playoffs. Neither has 2018 Funny Car champion J.F. Todd, whose Kalitta Motorsports Toyota Camry has also faced inconsistencies. Nonetheless, he came into the Countdown at midfield in 2018 and overcame the hot rods ahead of him. Can Todd do it again?

Kalitta’s Shawn Langdon, a winner with his Camry this year holds ninth place in the standings, yet has Tim Wilkerson’s Ford Shelby Mustang breathing down his neck, just 48 points in arrears. For both of these drivers, Brainerd and Indy are vital to their 2019 seasons as they’ve got two-time champion Cruz Pedregon nipping at their heels. The veteran, currently driving a Dodge Charger SRT Hellcat holds 650 points and is 138 points behind Wilkerson. Funny Car has 17 racers on the grounds, so someone will go home.

Pro Stock is an intramural contest with all the top guns racing Chevrolet Camaro entries; you have to go back to 14th place to find a non-Chevy, Alan Prusiensky’s Dodge Dart. There’s still a lot of competitiveness in this field with only four drivers currently locked into the Countdown. 2017 champ Bo Butner leads the fray, followed by teammate Greg Anderson (-46) and Elite Motorsport’s Alex Laughlin -73), who’s still looking for his first NHRA Pro Stock Wally winner’s trophy.

Matt Hartford, who picked up his first win of the season at Seattle is going to Brainerd for the fist time this weekend; it’ll be interesting to see if he gets sucked in by the rowdies at “The Zoo” as he tries to overcome a 136-point deficit to Butner. Those four are currently the only drivers locked into the Countdown fight, but they’ve got some very significant racers pawing at their positions.

Summit Racing’s Jason Line is in fifth place, followed by Deric Kramer, five-time champ Jeg Coughlin Jr., two-time titleholder Erica Enders, Chris McGaha and Kenny Delco, who holds tenth place points for the moment. If being 495 points behind Butner means you still might have a chance to make the Countdown, look at Fernando Cuadra, Rodger Brogdon and Val Smeland, who hit that plateau. Smeland and Brogdon (tied at -495) are only 11 points behind tenth-placed Delco. This could get interesting, especially with 20 entries this weekend (Brogdon not included).

The weather forecast currently calls for rain Thursday night but clear weather on Friday and Sunday; there is the possibility of afternoon thunderstorms on Saturday, which could mess up final qualifying for Sunday’s eliminations.