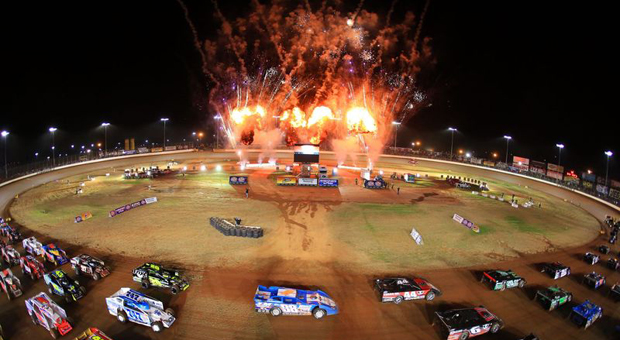 One buzzworthy World of Outlaws Late Model Series driver will take home an extra $1,000 from The Dirt Track at Charlotte’s eighth annual World of Outlaws World Finals Nov. 6-8 thanks to fan interaction on social media.

Fans will determine the winner of the DirtonDirt.com World of Outlaws Late Model Series Social Media Superstar by mentioning their favorite WoO LMS drivers on Twitter. From the start of World Finals Qualifying Night on Thursday (Nov. 6) through the conclusion of the weekend’s finale on Saturday night (Nov. 8), the WoO LMS driver generating the most social media buzz will claim the $1,000 award.

Fans can make sure their posts count for drivers by using the hashtag #DoDSuperstar in their Twitter posts. DirtonDirt.com staff members will use the hashtag to track posts and determine which WoO LMS driver generates the most social media buzz. The winning driver will be announced during the WoO LMS Awards Banquet Sunday, Nov. 9 at the Great Wolf Lodge in Concord, N.C.

DirtonDirt.com provides video highlights, news coverage, results and features on all types of Dirt Late Model racing. The full-fender division’s preeminent media source will also produce the on-line Pay-Per-View broadcast of this weekend’s World Finals for fans who can’t make the trip to Charlotte. Ordering information for the Pay-Per-View production of the World Finals is available by logging on to www.DirtonDirt.com or www.DIRTVision.com.

The World Finals begin on Thurs., Nov. 6 with Qualifying Night featuring two rounds of WoO Late Model and Sprint Car time trials and two sets of Super DIRTcar Series Big-Block Modified heat races. Each division’s first round of qualifying will apply to Friday’s program and the second round to Saturday’s racing card.

Tickets for the World Finals Presented can be obtained by logging on to www.charlottemotorspeedway.com or calling 1-800-455-FANS. Three-day packages are available for the bargain price of $89 and $34 for children 13-and-under.