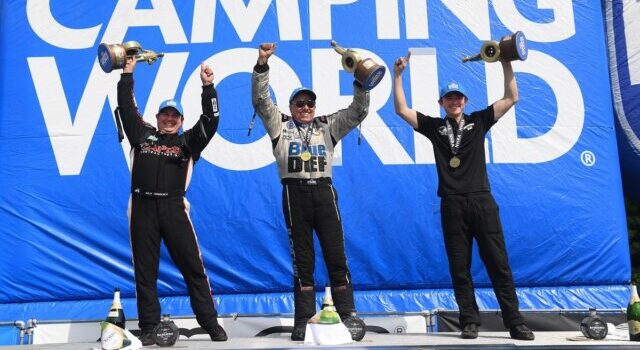 After almost a month off from racing, the legends of the NHRA’s Camping World Drag Racing Series were back at it this weekend at the TascaParts.com New England Nationals at New England Dragway, where experience became the key to victory. Beginning with the father of the Top Fuel Torrence Racing family, Billy Torrence who mastered the power-to-traction opportunity during Friday night’s qualifying session to race to the top spot and using this momentum to race past Top Fuel father, Mike Salinas in Sunday’s final round. Although Torrence’s latest victory looked easy, things were not so easy for this weekend’s Funny Car victor John Force.  After a poor showing during Friday night’s qualifying session, with an unrepresentative 7.431 second run at 85.24 MPH, Force found his literal “racing Force” during Sunday’s final elimination rounds. Despite a challenging first run, by the final round John was on fire and sitting alongside his John Force Racing teammate Robert Hight. Force and Hight had met 55 times in Funny Car racing, and this pairing was their seventh time in the finals. They were three and three each going into this race, and Force not only left with the advantage but also his 153rd win. Although two long-time NHRA victors found their way to the podium, it was drivers like these that made third-generation racer Aaron Stanfield a chance to become a real threat in the Pro Stock division in New England. Thanks to what Stanfield learned from his drag racing father and grandfather Greg and Howard Stanfield this drag racing young gun raced his way to the top over Pro Stock legend Greg Anderson. 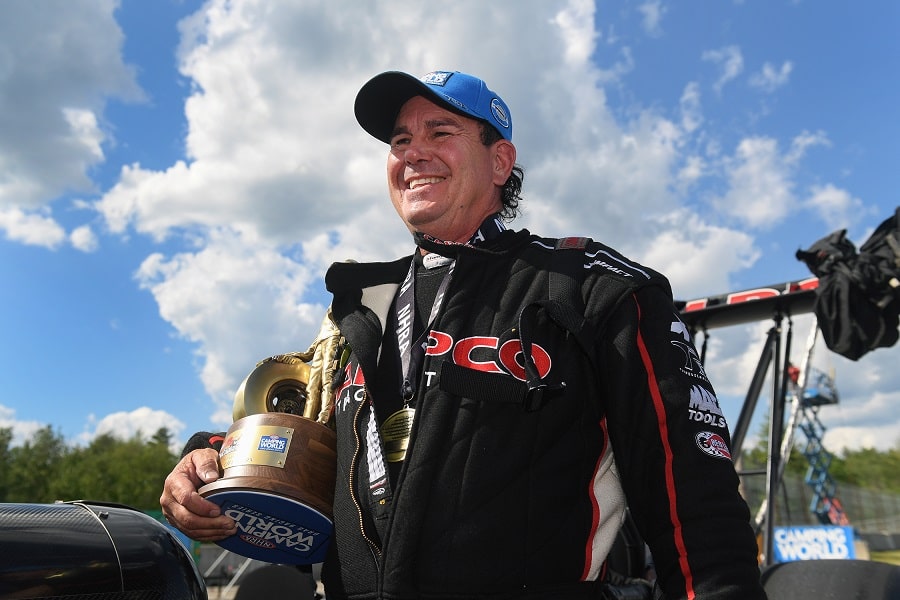 Like most tracks, the Torrence Racing family came into Epping as the Top Fuel team to beat. While this usually means that the younger generation would pull off yet another victory, it was the father of the team who proved that he had what it took to earn yet another Wally. Beginning with an impossible-to-touch Friday-night blast that would give him the No. 1 qualifying spot, Billy Torrence continued to dominate during Sunday’s qualifying rounds. After taking Joe Morrison down in round one, the second round against old friend Antron Brown was no freebie. In fact, Torrence hazed the tires and Brown did not, but with one-thousandth of a second difference off the line Billy Torrence’s holeshot gave him the advantage and sent him to the final against Top Fuel father Mike Salinas.

Despite Salinas’s Scrappers dragster being much faster than Torrence, another nano-second holeshot turned on the final win light for Torrence in New Hampshire giving the Top Fuel legend his seventh career victory.“While Steve has been winning all of our team’s Wally trophies lately, it was the old man at New England,” said Torrence. “I have to thank the good Lord and my team for making me one of the fastest drivers at this track. I am so excited to take this trophy home for my little granddaughter.” 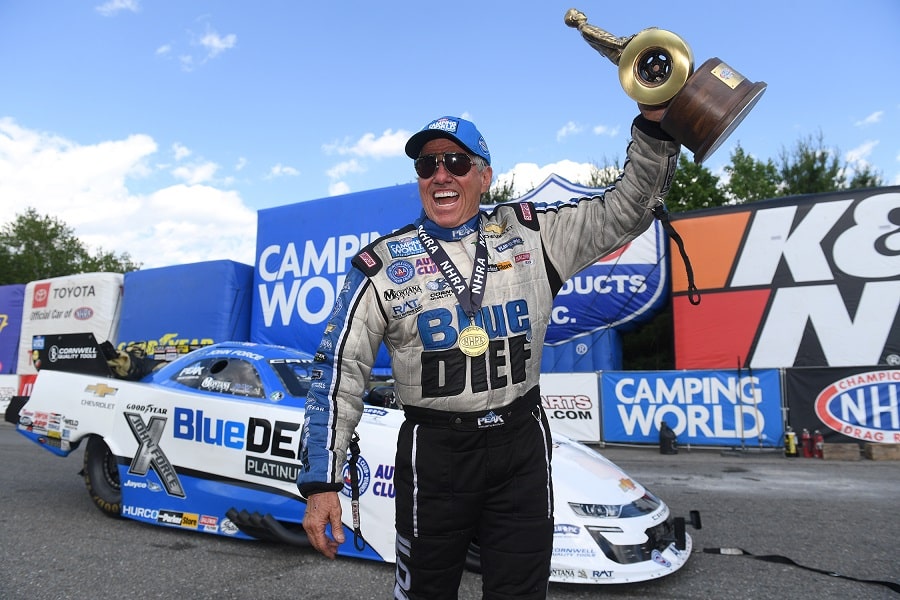 Torrence would not be the only experienced driver to steal the victory at New England Dragway. After a poor showing during Friday night’s qualifying session – with an unrepresentative 7.431-second run at 85.24 MPH – the king of John Force Racing found “The Force” during Sunday’s final elimination rounds. In round one of elimination on Sunday the day began with Cory Lee, the New Englander versus the greatest Funny Car racer of all time. Force’s car quit well before the finishing line, but Lee had to peddle his car twice and could not capitalize on the opportunity Force allowed him.

Round two solidified Force’s Epping march toward the winner’s circle when he paired up next to former Funny Car world champion J.R. Todd. Thanks to a 3.957-second run at 329 MPH to Todd’s 4.006-second attempt, Force raced his way to Sunday’s semifinal against Terry Haddock. Despite the fan favorite’s effort to take the wind out of the competition’s sails, Force did what he does and clicked off a quicker run with a slower elapsed time.

After Haddock’s failed attempt to take down John Force, Sunday’s final round would result in an all John Force Racing lineup as this team’s paternal force would lineup against his teammate Robert Hight. While the two were three and three going into this race, it was Force who used his experience to overpower his teammate for his 153rd win.

“This victory was a real team effort,” said Force. “I couldn’t be anything without all of those who support myself and this team.” 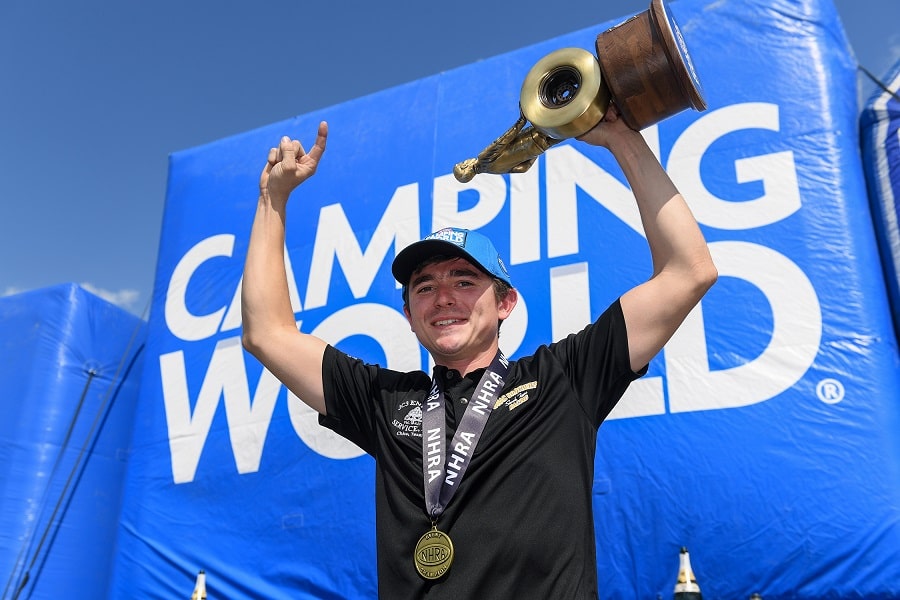 Despite the legends of this sport becoming the Top Fuel and Funny Car victors in New England, it was drivers like this that would give third-generation Pro Stock driver Aaron Stanfield an unforgettable win this weekend. Following in the drag racing tire treads of his father and grandfather, Stanfield is now proving himself beyond his family’s tutelage. Although he would begin the weekend with the lowest average reaction time in 2021 (at 0.024 seconds), Sunday’s elimination rounds would give the Pro Stock young gun a chance to prove what he has.

As he continued to tick off drivers like Alan Prusiensky and Mason McGaha, Stanfield raced his way to Pro Stock legend Greg Anderson in Sunday’s final round. The last time these two cars went down the track there was only 500 hundredths of a second difference between them and after Stanfield left the line first, the picture looked eerily similar. Despite this, Stanfield’s third-generation experience got him by Anderson by a second to give one of this sport’s youngest drivers the victory.

“I owe this team all of the credit on this victory,” said Stanfield. “I have been trying to do my best behind the wheel, but without all of their work on my ride there is no way that I would have the opportunity to have an experience like this one.”