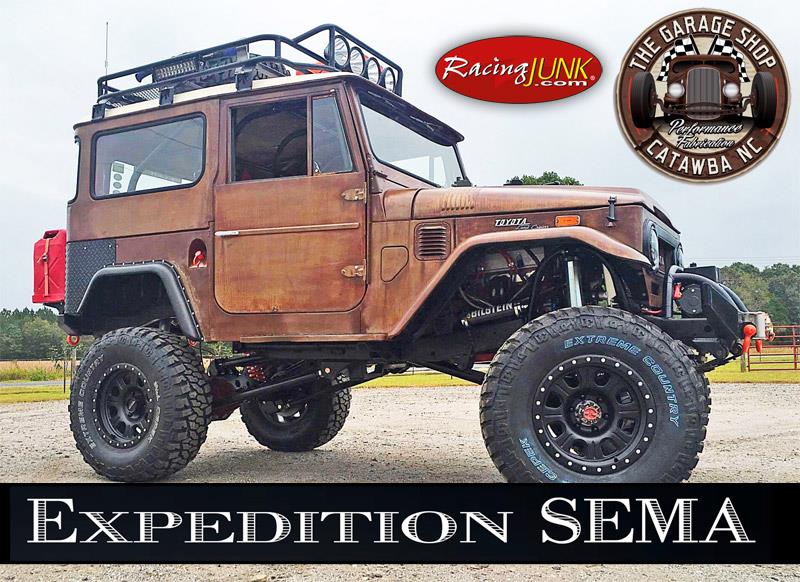 RacingJunk is happy to announce that today, The Garage Shop in Catawba, NC launched Expedition SEMA: The Garage Shop tackles the Trans-America Trail in a 1970 Toyota FJ40 Land Cruiser. The 30 day trip will cover 4,000 miles of dirt roads in 11 states through the heart of America.

“We have a passion for overland expedition driving,” said Aaron Brown, Owner of The Garage Shop. “We have driven Moab, Engineer Pass, the Jarbidge Mountains and more.”

While in Las Vegas for SEMA 2015, Brown devised the idea to create a vehicle that would test products to the fullest in some of the harshest conditions in America, from the high peaks to deserts, farmland and everything in between. The team will sleep in tents each night and eat only the food they bring with them and can fit into the FJ40. It’s the ultimate man and machine expedition across America.

The Garage Shop wanted to create a project that would help to rediscover the backroads and small towns of America, coast to coast. What better way to do that than on the Trans-America Trail, which stretches from Central North Carolina to Las Vegas, NV? Expedition SEMA will trek across dirt roads in 11 states including North Carolina, Tennessee, Alabama, Mississippi, Arkansas, Oklahoma, New Mexico, Colorado, Utah, Arizona and Nevada.

“I wanted to build a vehicle that was practical and something that we could drive to SEMA,” said Brown. “We’re going to drive the FJ40 Land Cruiser nearly 4,000 miles on dirt roads and straight into SEMA, no washing, no waxing, no cleaning, nothing. Exactly like it came off the trail, even if the fenders are falling off.”

The Trans-America Trail (TAT) is a transcontinental, coast to coast route across the United States. It is designed for Dual Sport and Adventure Bike motorcycles. It consists mostly of dirt roads, logging roads, fire roads, farm roads, unimproved roads, and back paved roads.

For more information on The Garage Shop, please visit their Facebook page, “The Garage Shop.” Look for Project 39 in the RacingJunk.com booth at SEMA 2016.