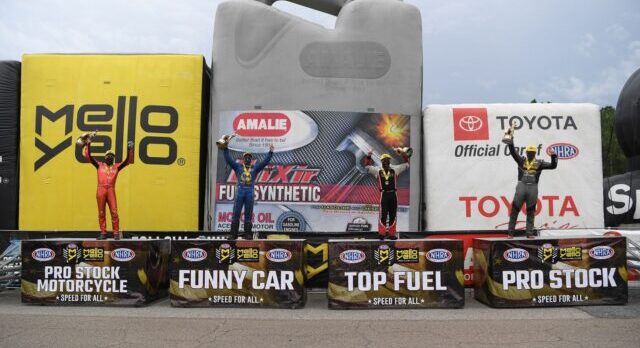 While drivers from the National Hot Rod Association (NHRA) have spent the last several weeks racing at one Indianapolis race track, things really heated up for four championship contending drivers after racing out of the Midwest and onto the sunny beaches of Gainesville, FL. Beginning with the winningest driver in the Top Fuel division, reigning and two-time world champ Steve Torrence, who took down his father Billy Torrence, in Sunday’s final round at the legend’s own home town race track – Gainesville Raceway. Torrence was not the only past champion to earn a victory at this heated track. Despite it taking two race cars to do it, Ron Capps extended the Don Schumacher Racing win streak in the Funny Car class to ten races following his final round win over Tim Wilkerson at the Amalie Motor Oil NHRA Gatornationals. As the final rounds wound down, the Pro Stock division would really heat things up after giving Elite Motorsports driver Alex Laughlin the opportunity to put his winless streak behind him after taking down Aaron Stanfield in Sunday’s final round. While Laughlin would break his season winless streak, Matt Smith would even race to his 25th career victory after going wire to wire alongside arch-rival and six-time world champ Andrew Hines in Sunday’s final round. 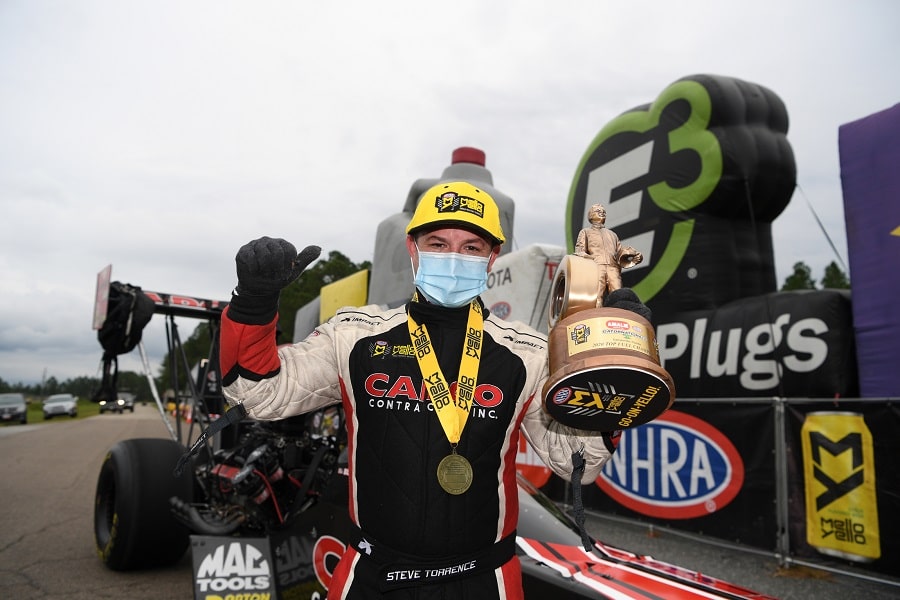 Before taking down family in Sunday’s final round, the stars seemed to align perfectly for two-time world champ Steve Torrence after the No. 4 qualifier began his battle on final elimination day with a tough fight against eight-time world champion Tony Schumacher and moving on to a quarterfinal race against Doug Foley. After taking down Foley, Torrence would have to face off with femme fatale Leah Pruett in Sunday’s semifinals. Thanks to a 3.772-second finish, the winningest driver in Top Fuel would move on to the driver who taught him everything he knows in Sunday’s final round. While this NHRA icon has not lost many races during his Hall of Fame driving career, Billy Torrence has continued to struggle against his son and the same was said for Sunday’s final round at Gainesville Raceway after Steve took down his father after taking the lead at the start, and winning by a 3.809 to 3.810-second count.

“This was an awesome win,” said Torrence. “I have never won at Gainesville before, but this weekend was like magic. I guess racing “Big Daddy” Don Garlits tribute car was just the magic that I needed to pull off this win.” 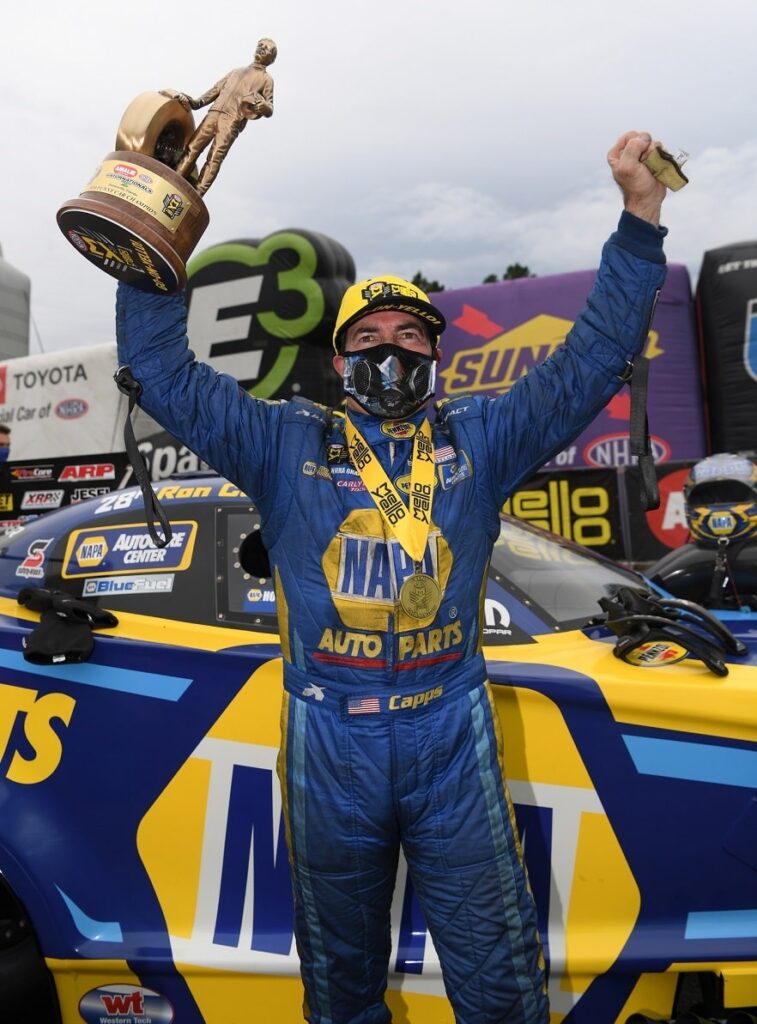 Although taking down the competition seemed a bit easy for Sunday’s Top Fuel winner, the same cannot be said for the latest Funny Car victor. Ron Capps extended the Don Schumacher Racing win streak in the Funny Car class to ten races after seemingly cruising through eliminations with victories against John Smith and Alexis DeJoria. The semifinals race against teammate Matt Hagan would prove to be a bit more challenging after Capps monster 3.89-second finish would end with his AUTO PARTS Dodge Charger SRT Hellcat sliding in his own oil after his engine blew at the finish line.

This would result in Capps having to roll out a spare car to take on Tim Wilkerson in Sunday’s final round. While the thought of racing a car with a couple of half-track test runs on it in a final round was not the past Gatornationals victor’s ideal plan, his hard working team made this swap look easy after the Don Schumacher Racing driver took down Wilkerson with a close 3.937 to 3.945-second victory.

“To be able to win four (Gatornationals) is pretty wild,” said Capps. “We put a spare car together that went out on its first full run and won the Gatornationals. To run that well in the final round of the Gatornationals, it is unbelievable. This just shows that the guys on my team definitely bring out the best in me.” 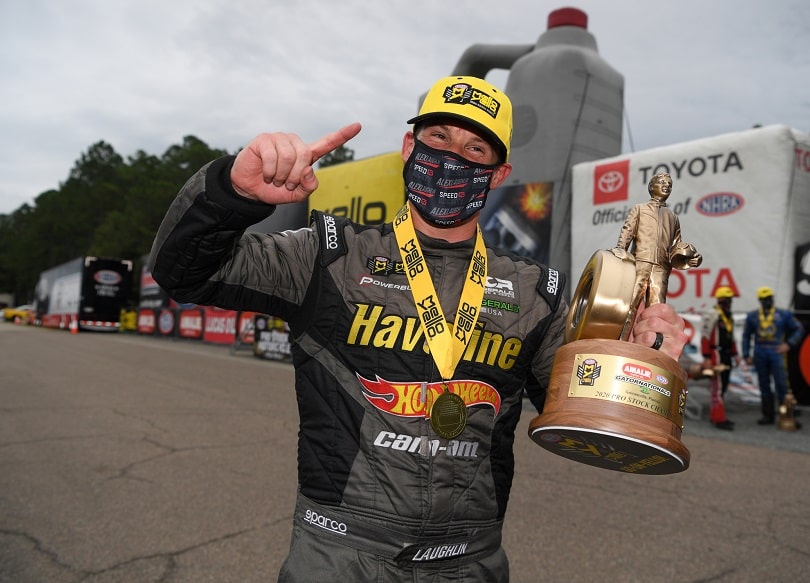 Prior to Alex Laughlin breaking his seasonal winless streak, the Elite Motorsports driver began Sunday’s final elimination round with a string of competitive reaction times. From the No. 4 starting spot, Laughlin posted wins against Kenny Delco, rookie Kyle Koretsky, and low qualifier Deric Kramer before moving onto a final elimination round against Aaron Stanfield in a final-round match-up between Elite Performance teammates. In one of the crazier final rounds in recent memory, both racers shook the tires hard at the start, but Laughlin was able to recover first and drove his Havoline Camaro to a 7.06-second win for the fourth time in his career in eight final-round appearances.

“What a weekend,” laughed Laughlin. “This track has always been really good to me and I was amped in the finals. I went nuts when I saw the win light come on because it has definitely been an awful year and we really needed something to set us on a new course.” 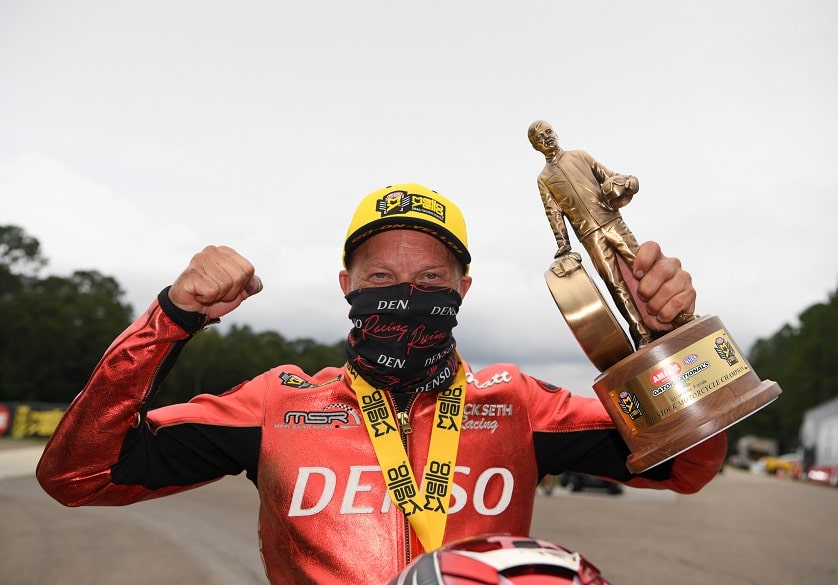 While few drivers were dominant throughout the race weekend in Florida, Pro Stock Motorcycle driver Matt Smith’s performance will go down as one of his most impressive of the weekend. After qualifying his Denso EBR in the top spot with a 6.814-second pass, four-hundredths ahead of the rest of the field.

Smith continued his dominating edge during Sunday’s eliminations to win for the 25th time in his career after overpowering wins against Kelly Clontz, John Hall, and his teammate, Scotty Pollacheck. Following these victories, Smith would have to take down arch-rival and six-time world champ Andrew Hines. Despite not having much luck against Hines in the past, Smith’s final pass of 6.843-second pass broke this curse and gave Smith the opportunity to share the winner’s circle celebration with his father Rickie, who won in the E3 Spark Plugs Pro Mod series.“I have tried since 2006 to win this race and I have never been able to do it,” said Smith. “I have watched my dad do it a couple times and it means a lot to win in Gainesville and leave with the points lead.”

The return to the 2020 NHRA Mello Yello Drag Racing Series season continues at the Mopar Express Lane NHRA Midwest Nationals presented by Pennzoil at World Wide Technology Raceway, in Madison, IL, on October 2-4, 2020. Stay tuned to RacingJunk.com for all of the continued return to NHRA racing coverage!