Racing in wine country led to some incredible wins for three well-known NHRA drivers. In front of a sellout crowd at this weekend’s 31st annual Toyota NHRA Sonoma Nationals, at Sonoma Raceway, part-time Top Fuel driver Blake Alexander took down the winningest driver in Top Fuel history to earn his second career victory. Defending Funny Car world champion Robert Hight also overcame yet another John Force Racing explosion to earn his second win of the 2018 season. Five-time Pro Stock world champion Jeg Coughlin Jr. also became the second driver in the Pro Stock class to earn three victories this season after powering past some of this series’ top drivers for yet another win in Sonoma. 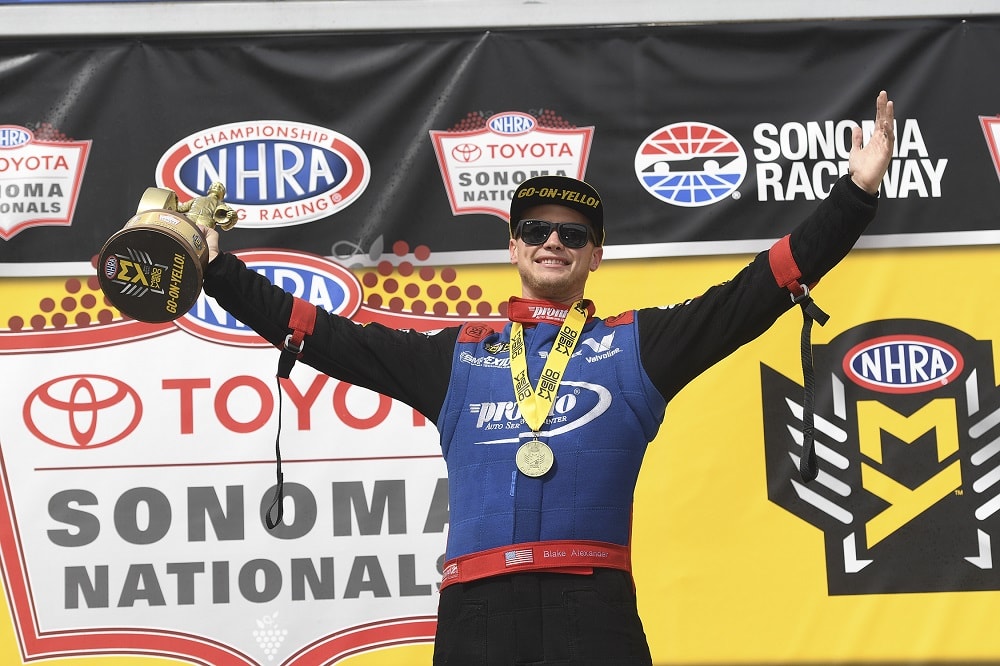 Despite competing on a limited schedule in 2018, California native and third generation NHRA drag racer Blake Alexander raced his way past Mike Salinas, three-time world champion Antron Brown and Scott Palmer before moving on to the final elimination round against the winningest driver in Top Fuel history, Tony Schumacher.

With a run 4.004-seconds at 287.41 MPH, Alexander proved that competing in only six events this season would not stop him from earning as many victories as possible.

“We may be a part-time team, but we come out to the track trying to win every race, and so far this year we have had a lot of success with this plan,” said Alexander. “My life has changed this year with how well we have been running, and the opportunity that Bob Vandergriff has given me to drive his racecar has been paramount in taking my career to a higher level.”

Despite having to settle for a runner-up finish, Schumacher had a reason to celebrate after leaving Sonoma sitting second in the point standings heading into Seattle.

Although John Force Racing driver Robert Hight was forced to overcome yet another explosion on Friday night, the defending Funny Car world champion found out that even a backup car couldn’t stop him from earning his second win of the 2018 season.

After defeating Tim Wilkerson, Bob Tasca III and Tommy Johnson Jr., Hight took on fellow Funny Car world champion Ron Capps in Sunday’s final round. Thanks to a 3.984-second pass at 319.75 MPH, Hight once again ended up on top in Sonoma. 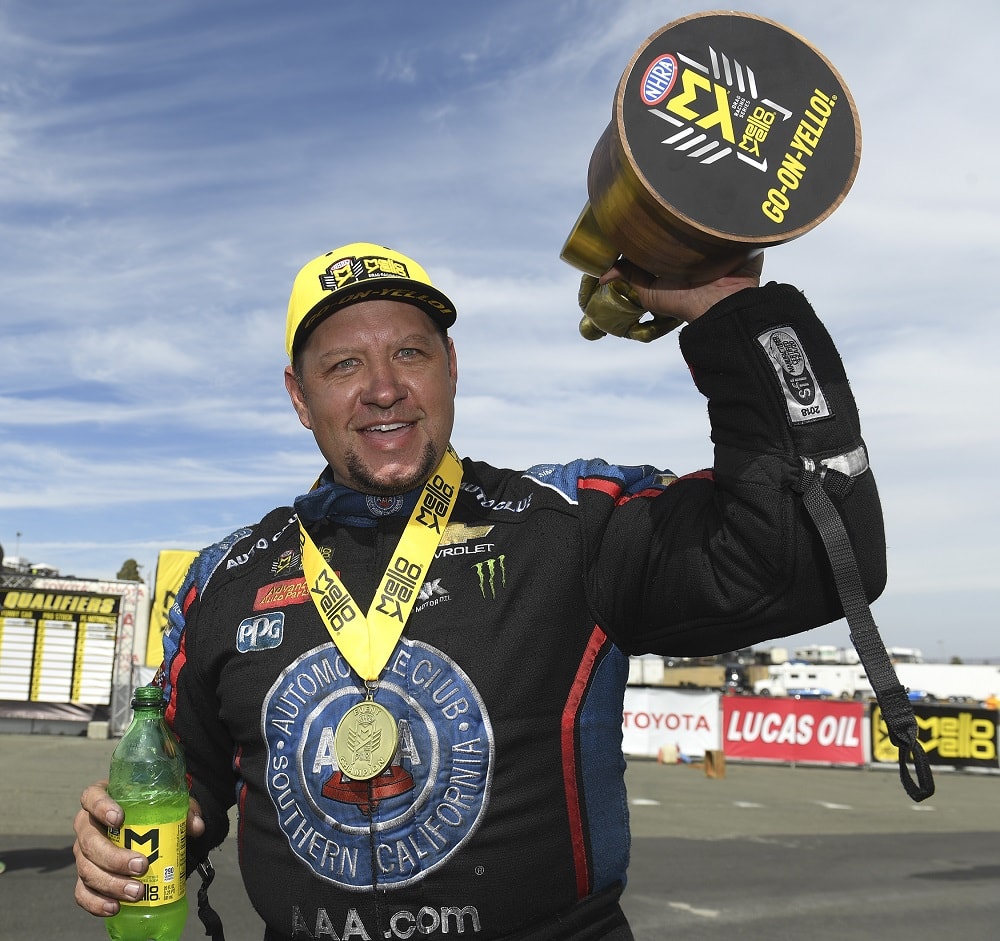 “This track is unbelievable, and I could not have asked for better weather conditions this weekend,” said Hight. “This win even gets us on track to start off the Countdown to the Championship in the right way.”

Following this victory, Hight has locked in his position in the Countdown playoffs. Thanks to his second runner-up of the 2018 season, Capps has also assured a spot alongside Hight in the 2018 Countdown to the Championship. 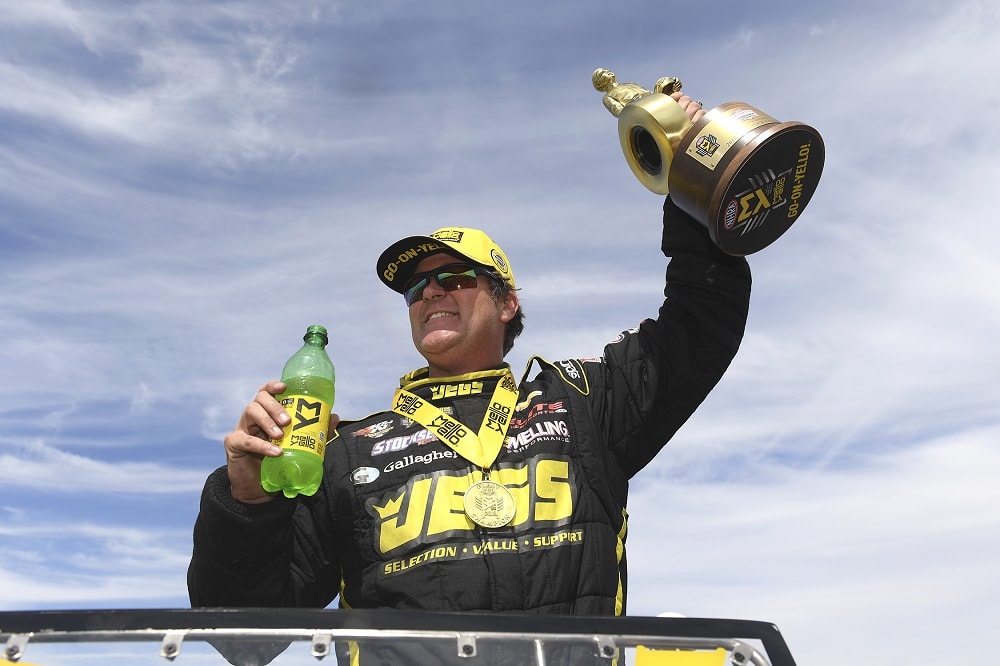 Hight was not be the only driver to earn yet another win this season. After defeating Alex Laughlin, Tanner Gray and No. 1 qualifier Greg Anderson, five-time Pro Stock world champion Jeg Coughlin Jr. moved on to Sunday’s final elimination round against Deric Kramer.

With a 6.532-second pass at 212.16 MPH in his JEGS.com/Elite Performance Chevrolet, Coughlin secured his third career win in Sonoma and became the second driver in the Pro Stock class to earn three victories this season.

“We have weathered a few storms over the past few seasons, but this team has worked hard to assure that we are now a threat to win every weekend this season,” said Coughlin. “This is a true testament to just how hard this team has continued to work despite what obstacles may try to stand in our way.”

Despite falling in the semifinals, No. 1 qualifier Anderson became the first driver in the 2018 Pro Stock class to clinch a spot in the Countdown to the Championship.

The 2018 NHRA Mello Yello Drag Racing Series season continues at the NHRA Northwest Nationals, August 3-5, at Pacific Raceways in Seattle. Stay tuned to RacingJunk.com for all your NHRA coverage!