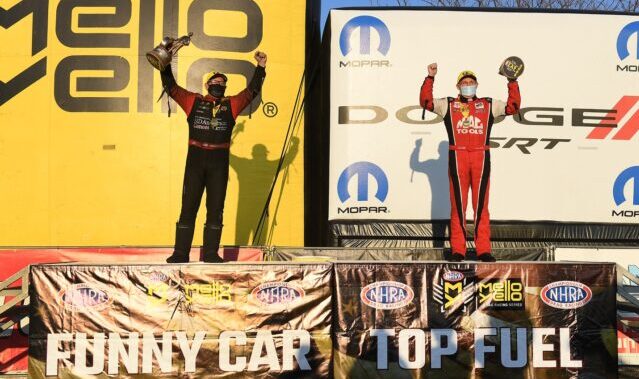 In the most crash-filled NHRA race of the 2020 season, two drivers drove away with some of the most impressive victories of the year. Although he would have to take down last week’s NHRA Gatornationals Top Fuel victor in Sunday’s final round, the king of Kalitta Motorsports took the Tree with a starting-line advantage and despite smoking the tires at the start of this race, Doug Kalitta launched hard and kept it hooked all the way to the stripe to take the Top Fuel win. While Kalitta would have to take down Steve Torrence to earn his second Wally of the year, Sunday’s Funny Car victor would have to take down his own Don Schumacher Racing teammate Matt Hagan to earn a much needed win this season. After seizing the starting line advantage with a .047-second reaction time Tommy Johnson overpowered Hagan’s .058-second time and continued to power down the quarter mile of World Wide Technology Raceway for the victory.

Before Kalitta could race to the win in Sunday’s final round, he would have to avoid the first of many frightening crashes like the one that Leah Pruett experienced during the second round of eliminations. As the track began to cool down on Sunday, many drivers reported difficulties and one such driver was the only Don Schumacher Racing female driver, whose car literally broke in half following her run against Tony Schumacher

Although Pruett would come up short on Sunday, Doug Kalitta would see his Sunday elimination start against Shawn Langdon to power past T.J. Zizzo and eventually his old friend Tony Schumacher in Sunday’s semifinal round. Before moving onto the final round against Torrence, the 91st meeting between Schumacher and Kalitta Schumacher’s throttle stuck on the burnout and banged the blower. He pulled it over by the wall and coasted on down the track. Schumacher could not get off the track in time and Kalitta was shut off. Kalitta’s crew ran back to pits and grabbed a fuel jug to refill the car. When they fired the car, it launched and went straight down the track giving Kalitta lane choice over Torrence in the final. 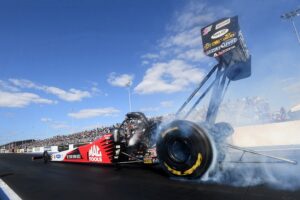 As Kalitta pulled up alongside Torrence, it would not take long before the driver who was taking down the best of the best all weekend would keep his start hooked all the way to the stripe for his final win of the season.

“It was definitely a crazy day, but I am so thrilled about this win,” said Kalitta. “I just cannot say enough about Connie and everybody on this Mac Tools team. We knew we had to stay with it. It is all about going rounds at this point and we were just trying to stay close and be there at the end. I am so glad that this all worked out.”

Due to this win Kalitta is now two points behind Torrence in the hunt for the championship.

The Top Fuel division was not the only one that began with frightening crashes. Prior to Tommy Johnson, Jr. obtaining the victory on Sunday, another femme fatale would be left with her race vehicle in pieces. As she prepared to take on Matt Hagan in Sunday’s semifinal round, Alexis DeJoria experienced a frightening explosion. While she would climb out of her car unharmed to take on Hagan in a backup car, she would fall short to the Don Schumacher Racing driver after rattling the tires and allowing Hagan to go to the final round against Johnson. 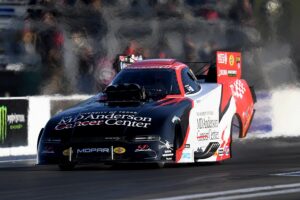 With track temperatures cooling into the mid-70s, the two Don Schumacher Racing teams who share technology, shop space, and information brought their cars to the line as brutal competitors. Matt Hagan’s Mopar/Pennzoil/Sandvik Dodge Charger SRT Hellcat was first to the line in the left lane when the MD Anderson Cancer Center Dodge Charger SRT Hellcat team of Tommy Johnson Jr. raced their car to the water box and fired their Hemi before Hagan’s crew. After Johnson seized the starting line advantage with a .047-second reaction time to Hagan’s .058-second time and powered through the quarter-mile in 3.884 seconds at 326.08 mph, just two-thousands of a second quicker than Hagan’s 3.886-second run at 333.00 mph. It was Hagan’s best run of the day and the top speed of the event, but it still came up short against Johnson.

“This win means a lot,” said Johnson. My dad won this race back in 1976 and it was the only national event he ever won, so I have always wanted to win this race and it just means a lot to see this dream come true.”

Due to this win, Johnson is now a threat in the ongoing Funny Car points chase.

Despite both the Top Fuel and Funny Car victors being crowned, drivers in the Pro Stock, Pro Stock Motorcycle, Pro Mod, Factory Stock and Sportsman divisions would be forced to wait for their victories after NHRA officials postponed the conclusion of racing due to a unique combination of cold temperatures and wind direction. The Sportsman classes are scheduled to complete their racing on Monday, but no new dates or venues have been announced yet for the other completions.

The return to the 2020 NHRA Mello Yello Drag Racing Series season continues at the AAA Texas NHRA FallNationals, at Texas Motorplex, in Ennis, TX, on October 14-18, 2020. Stay tuned to RacingJunk.com for all of your drag racing coverage!