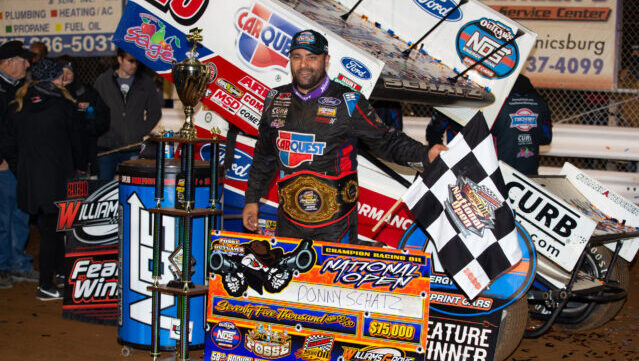 Although Donny Schatz does not need another reason to feel like a king in the dirt racing world, following his win at this weekend’s World of Outlaws NOS Energy Drink Sprint Car Series Sixth National Open Title, the 10 time world champion has even more reason to brag.

Obtaining his 299th win definitely took patience and aggression, especially with Kyle Larson lurking behind him in the closing laps. Before taking on Larson in the closing laps of this 40 Lap feature, Schatz won his Drydene Heat Race and then finished fourth in the DIRTVision Fast Pass Dash. Despite this, the former champion would be forced to start fourth for this race.

Despite the not so great start, Schatz quickly made his way inside the top two within the first 11 laps. As he continued to chase down pole sitter David Gravel, Schatz eventually snuck underneath Gravel to take the race lead. From there, Schatz made it his race to lose. As the pole sitter continued to fade in the 29-car field, Schatz seemed to have a grip on pulling off yet another win. That is until the No. 57 of Kyle Larson began to chase down Schatz to try and claim his latest win.

As the laps wound down, Larson would find himself chasing Schatz and with five laps to go he found the perfect surge to make the gap between he and Schatz as small as a corner. While Larson would throw everything he had at the Tony Stewart/Curb-Agajanian Racing machine after passing the white flag, including nearly pulling even with Schatz through the corner, but the wall and his right rear didn’t get along. Schatz pulled away with the big win, while Larson had to settle for his second runner-up finish in a row at the track.

Following this win Schatz was the first to admit that 2020 has been one of his worst seasons, coming off an eight season stretch of winning 11 or more races. However, winning the biggest Sprint Car event of 2020 was a welcomed boost.

“It feels so good to win this race,” said Schatz. “We started our weekend by trying something in the Dash, but it was not all that great. Fortunately, my Crew Chief changed the car back and that was definitely the right call because we are back in Victory Lane.”

Thanks to this win Schatz now sits in the top-3 in point standings as the World of Outlaws NOS Energy Drink Sprint Car Series heads to Port Royal Speedway, in Port Royal, PA for the Nittany Showdown next Friday and Saturday, October 9th and 10th. Stay tuned to RacingJunk.com for the latest in the dirt racing news.