Mother’s Day weekend of 2020 is sure to be remembered more than ever before. While most of us may have focused on finding a way to spend time with our mother’s in the current socially distant society, drivers in the World of Outlaws NOS Energy Drink Sprint Car Series finally found themselves back at it racing live at Friday night’s World of Outlaws NOS Energy Drink Sprint Car Invitational, at Knoxville Raceway, presented by McKay Insurance.
Although the massive grandstands at Knoxville, Iowa’s semi-banked 1/2-mile dirt oval raceway remained empty, due to COVID-19, a field of 48-cars were back on the track ready to rock on Friday night. Before engines could fire to life, drivers and each of their five allowed team members were asked to take precautions like having their temperatures taken, answer questions about their health and were handed masks and bottles of hand sanitizer. Team haulers were also spaced 12 feet apart and drivers were also asked to stay kept six feet apart.

Even though fans were forced to stay away from this live event, they would have the opportunity to tune in on DIRTVision and were even able to contribute to the prize pot, which ultimately resulted in nearly $15,000 to drivers finishing in various positions, drivers from different states, drivers who failed to make the Feature, and so on.

While this 48-car field, included the return of Kasey Kahne and Kyle Larson, it would be last year’s Knoxville Nationals winner, David Gravel, of Watertown, CT, that would race his way back to the top on Friday night. Gravel began earning his first victory of the 2020 season by setting the fastest time in Flight 2 of Qualifying and dominating his Drydene Heat Race. 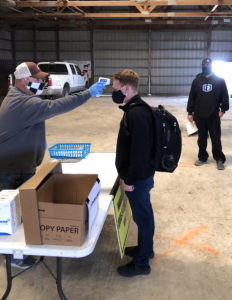 After the first live 30-Lap Feature in a couple of months went green, the No. 18 of Ian Madsen would lead the way. Within the first few laps, Daryn Pittman darted ahead of Madsen for the lead and led the opening eight laps before Madsen tracked him down and powered around the outside to retake his claim to fame, while Pittman spent the next eight laps trying to claw his way back to the top. Behind them, race winner Gravel looked to be struggling after an early run at the leaders. He fell from third to fifth on a restart and came close to crashing with Lynton Jeffrey as they banged side bars going into Turn 2. As the laps wound down Gravel would find himself racing for the lead with 12 laps remaining. Despite Madsen continuing to lead the way, with about three laps to go, Gravel threw a desperate slider underneath Madsen going into Turn 1, which almost led to a side by side crash. Despite this initial approach not working out as he had planned, Gravel got another chance to pull off an impressive win after Madsen’s car got sideways off Turn 4 with two laps remaining. This gave the Watertown, CT driver a chance to take advantage of this mishap and speeding down the front stretch to lead the final two laps and picking up one the most impressive wins of the season.

“I don’t know how we pulled off this win,” said Gravel. “Me and Ian made a lot of mistakes and if it was a 25-lap race, I would have lost. I was really good in Turns 1 and 2 on the bottom, but man, I could not come off the front stretch. It was so treacherous, and he was kind of running up the track and turning down and getting more momentum. If I hit my marks, I was faster, but man, it was hard to do, and I am so grateful that this win came to fruition.”

As the world begins to reopen, both World of Outlaws NOS Energy Drink Sprint Car Series drivers and fans can look forward to more live racing action on Friday, May 22 and Saturday, May 23 for a doubleheader event at Federated Auto Parts Raceway at I-55, in Pevely, MO, with an opportunity for limited fan attendance. Stay tuned to RacingJunk.com for the latest racing from the dirt.