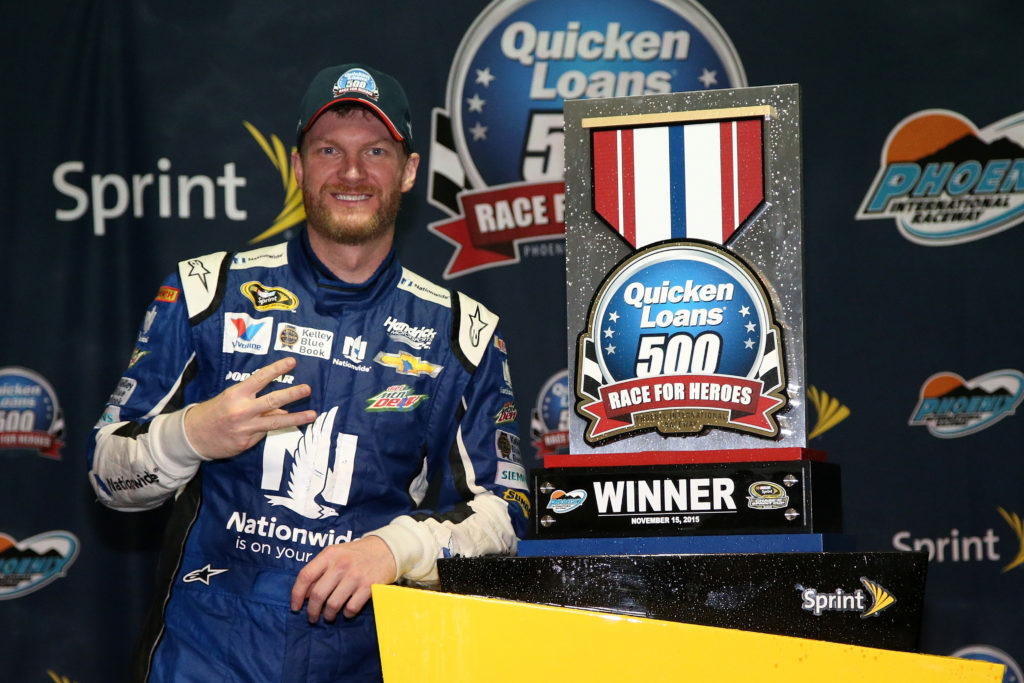 The dominoes continue to fall in the NASCAR Monster Energy Cup Series as another driver announces his impending retirement. At a live press conference this afternoon Hendrick Motorsports driver Dale Earnhardt Jr., NASCAR’s most popular driver for 14-years running, announced that the 2017 season will bring a close to his NASCAR Cup Series driving career.

Stating that he is “leaving the sport on his own terms”, the son of famed NASCAR Winston Cup Series driver Dale Earnhardt Sr. said that having time to sit down and think during his rehab from a concussion suffered after a crash at Michigan International Speedway, made him realize what is really important.

“After my concussion last season, I realized that my driving career may have ended without my getting a vote at the table,” said Earnhardt. “Fortunately, this gave me time with my family and friends and I realized that this is something that I had taken for granted and that I want to rectify this in the future.”

Despite the 42-year-old driver’s decision to vacate his seat at Hendrick Motorsports he has promised his fans and supporters that he will continue to be a part of the sport.

“I am excited about the races that I have left with Hendrick Motorsports this season and I even have a couple of races lined up in a JR Motorsports XFINITY ride in 2018,” said Earnhardt. “I am also planning to become more involved with the business side of our family’s race team and I hope to continue to be a mentor to other up-and-coming drivers and crew members within the sport of NASCAR for years to come.”

Along with his continued involvement in the business side of NASCAR, Earnhardt said that he intends to continue assisting his and Rick Hendrick’s thriving Chevrolet dealership in Tallahassee, FL as well as assuring that his Whisky River restaurant chain thrives.

As Junior Nations bids adieu to the only driver that they have cheered for since the death of Dale Sr. the rest of the NASCAR world holds their breath to find out who will fill such famous shoes.

With rumors flying around all day about the possibility of Carl Edwards coming back to replace the soon to be vacated No. 88 as well as Earnhardt Jr. himself mentioning how impressed he is with rising stars like Kyle Larson, those who haven’t given up on the sport in its entirety will be waiting with baited breath.

“Following this announcement, we are going to confer with the No. 88 team was well as our partners/sponsors to determine who might be the best fit going forward,” said Rick Hendrik. “We aren’t going to make any rush decisions, but are sure that whomever the driver is Earnhardt Jr. will be around to mentor them.”

Stay tuned to RacingJunk.com to find out what will happen next in the world of NASCAR.

1 Comment on Dale Earnhardt Jr. to Retire at end of 2017 Season