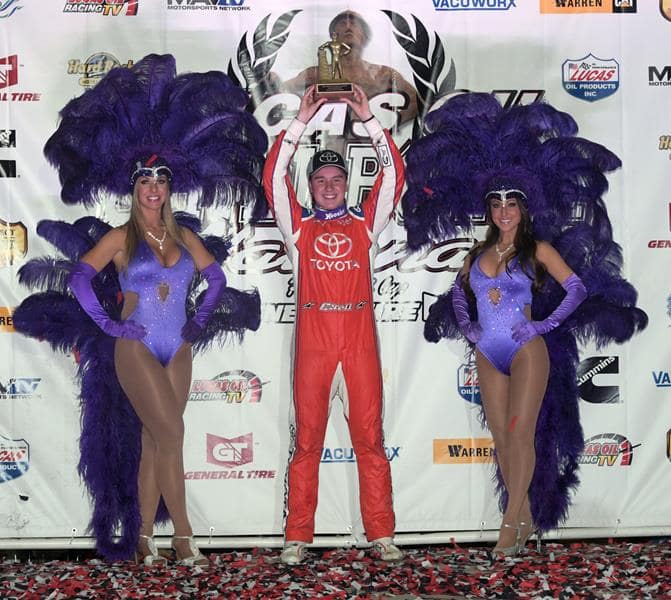 In yet another stunning finish, 2018 Lucas Oil Chili Bowl Nationals champion Christopher Bell found his way back to victory lane to win back to back Golden Drillers aboard his Racing/Keith Kunz Motorsports No. 71w.

Handing Keith Kunz his eighth win as a car owner and fifth consecutive since 2015, the Tulsa native’s weekend included one preliminary night win before he once again found himself battling his NASCAR nemesis Kyle Larson in Saturday night’s 33rd annual Chili Bowl, presented by General Tire.

Before taking on Larson for the last lap win, Bell started the 55-Lap feature on the outside pole beside first night prelim winner Logan Seavey. Although Larson’s No. 01 Keith Kunz and Curb-Agajanian Motorsports ride started this race in third, behind Bell, the Monster Energy NASCAR Cup Series and dirt racing star charged to the lead by Lap 20.

Following a caution on Lap 33, Bell would find his way chance to chase Larson for the race lead. After swapping lines (top to bottom) on the restart, Larson began putting some distance between his car and that of last year’s Chili Bowl victor.

Much like last year’s race, Larson appeared to have Saturday night’s feature race victory wrapped up. That is, until he was forced to battle against lapped traffic with just seven laps remaining, which gave Bell the advantage he needed to make his move.

On the final lap, Bell used this advantage to tap the tires through the first two turns as Larson began to slip to the bottom of the track. After reaching turns three and four, Larson made a valiant effort to keep his lead as he and Bell raced nose to nose. After clipping the wall in Turn 4, Larson found his hopes for victory once again dashed as Bell navigated past him for the race win by 0.350 seconds.

“I am so amazed to be here once again,” said Bell. “Never in my wildest dreams did I think I would be able to win the Chili Bowl. To do it three straight times is just unbelievable, but man, I don’t even care about three-straight. What about that race? I don’t think I’ve ever really been a part of a last lap race like that, so I’m just glad that thing came out in the end. This is something that I am going to cherish for the rest of my life.”

Despite once again missing out on an a Chili Bowl title thanks to Bell, Larson will have another chance to battle it out with his nemesis, along with a myriad of other talented drivers, at the 34th Annual Lucas Oil Chili Bowl Nationals, presented by General Tire, January 13-18, 2019 at the River Spirit Expo Center in Tulsa.

For continued updates, check out ChiliBowl.com.