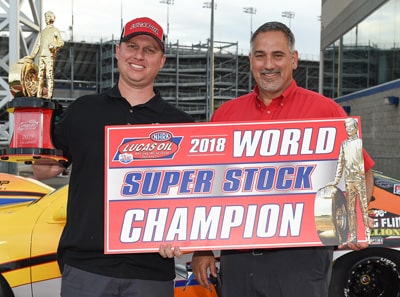 Henderson, NV’s own Justin Lamb, who won NHRA Lucas Oil Series national championships and Division 7 titles in both Super Stock and Stock in 2017, was back at it in Las Vegas. After coming into the weekend leading the points but with a number of racers still in the hunt for the championship, Lamb worked his way through eliminations while the other contenders dropped out to once again move this driver to the top of the pack. 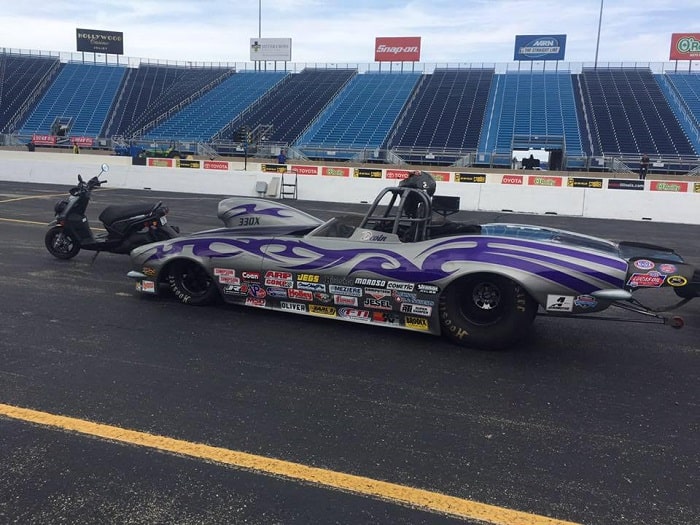 While Lamb would have to compete in Las Vegas for his latest championship, the newest Super Gas champion found his way to his first ever championship over one week ago. As a result, Devin Isenhower held a 10-point lead over Aaron Kinard in Super Gas coming into the weekend but was out of events to claim towards his points championship, and so elected not to compete in the event. Kinard lost early, leaving only Michael Miller with a shot at catching Isenhower. Miller lost in round three and Isenhower began the celebration from Lebanon, Indianapolis.

Although Justin Lamb had an opportunity to win two championships this season, Brian McClanahan entered the weekend with a one-point lead in Stock Eliminator over 2017 Champion Lamb as both drivers looked to add to their points totals. With a round one victory and a loss by Lamb, McClanahan clinched the 2018 NHRA Lucas Oil Stock Eliminator World Championship.

Racing to five final rounds this season, McClanahan grabbed an early win at the Pacific division event at Wild Horse Pass Motorsports Park to go along with a final round finish the week before at the NHRA Arizona Nationals. He then grabbed another runner-up finish in Fontana, Calif., and a win in Sonoma, Calif., in the middle of the season, followed by a win at the AAA NHRA Texas Fall Nationals outside Dallas. McClanahan now joins his dad Jerry and his son Ryan for three generations of NHRA Lucas Oil World Champions. 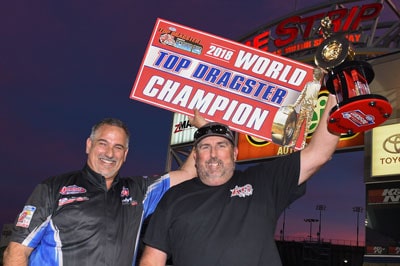 Eugene, OR driver Paul Nero also won his first championship after coming into the weekend leading the points in Top Dragster, presented by Racing RVs, over Mark Jones, who needed to win the event to overtake Nero. After starting the season strong, with national and divisional event wins in Phoenix at Wild Horse Pass as well as a win at the NHRA Northwest divisional at Mission Raceway Park in Mission, B.C., Nero found another reason to celebrate this weekend. After his top competitor failed to race his way past the second round, Nero raced his way to his first ever championship. 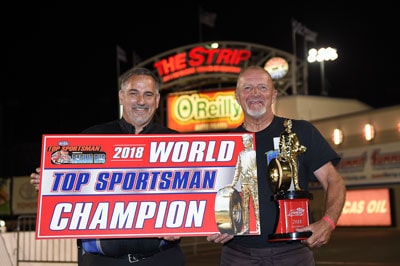 The newest Top Sportsman champion probably had the most work of any driver this weekend. Although Ronnie Proctor raced to three wins in four final rounds on the season, he was being chased by JR Lobner and Douglas Crumlich, as the three were separated by just 18 points.

Proctor won both his round one and two match ups, with Lobner falling in round one and Crumlich in round two for Proctor to claim the 2018 Top Sportsman presented by Racing RVs World Championship.

About Ellen Richardson 454 Articles
Ellen Richardson is the author of Behind The Wheel for RacingJunk.com. This automotive sports junkie has a passion for telling an athlete's story while also covering various racing activities. Find out more about her at ellennrichardson.wordpress.com or follow Ellen on Twitter at @ellennrich or Instagram at elnrich33.