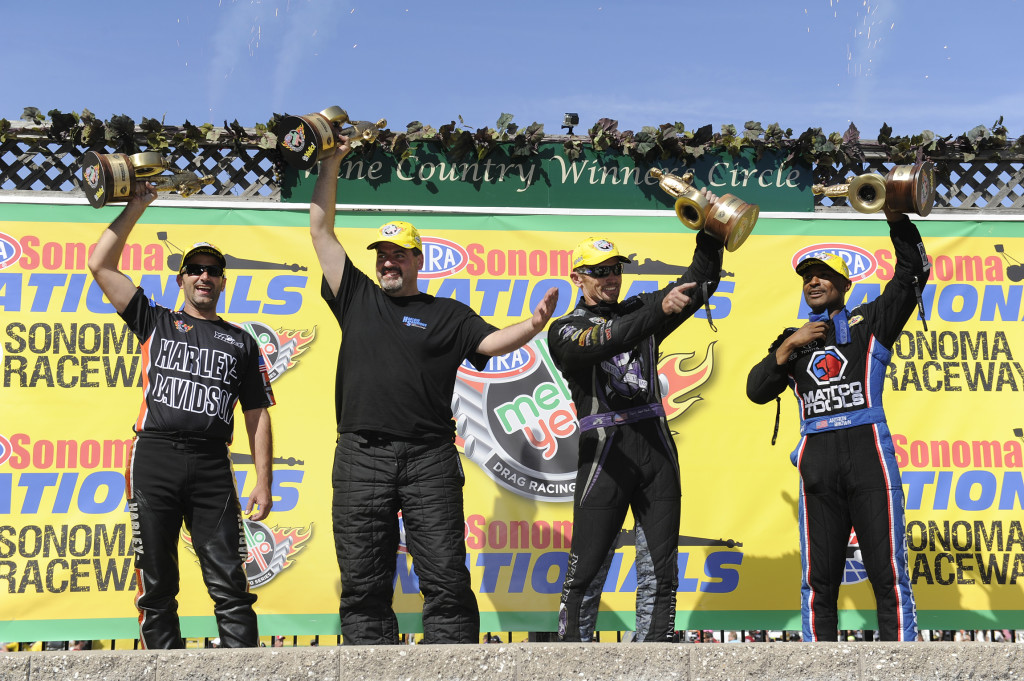 Drag racing history was made at the Sonoma NHRA Nationals when all four professional categories’ No. 1 qualifiers won their respective divisions for the first time. 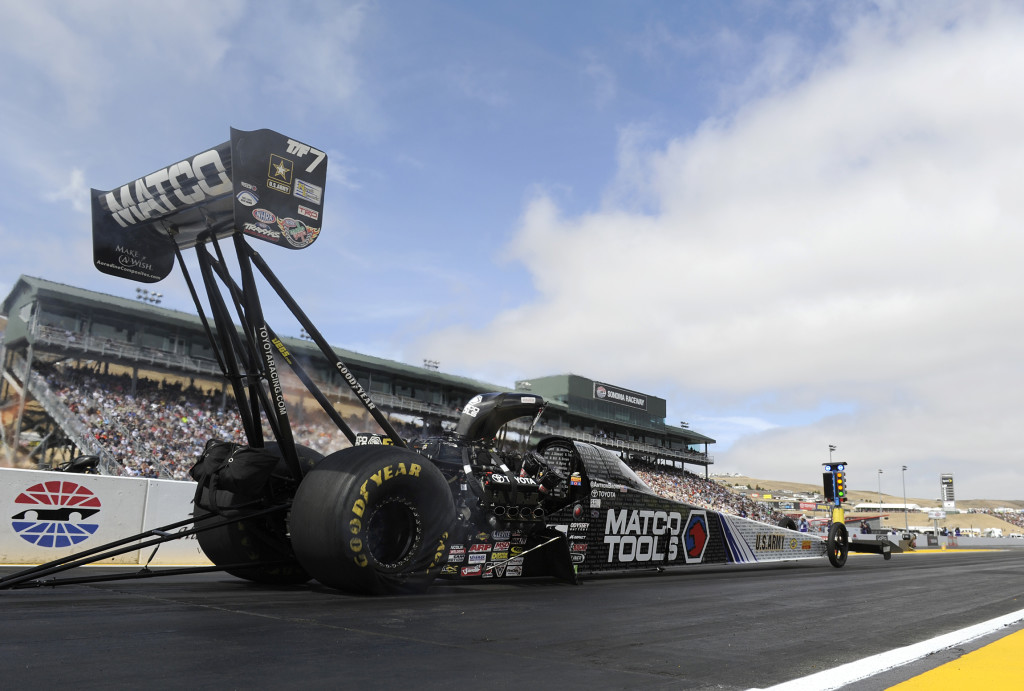 Antron Brown dominated Top Fuel eliminations from start to finish winning the NHRA Somona Nationals and in the process made history of his own.

A 10-year old Brown was at Englishtown’s Raceway Park to witness Big Daddy Don Garlits flip over in 1986 and that showmanship  instilled in Brown the desire to one day drive a Top Fuel dragster.  Starting professionally in the Pro Stock Bike class, Brown won 16 races and once he moved up to Top Fuel, his persistence and drive now has achieved 35 wins in that division, tying him with his drag racing hero.

“That is just a true, true, true blessing,” Antron said of his category best fourth win of 2015.  “To tie one of the greatest racers in history is just unbelievable and it hasn’t sunken in.  It won’t sink in until I actually stop racing because I won’t look at what we’ve done, I won’t do that until I walk away from this sport because I’m still young and I’m hungry.”

In eliminations, Brown trounced Steve Chrisman with a 4.76 time, second quickest of the round and then defeated rival Richie Crampton in the quarterfinals.  He narrowly defeated fellow DSR teammate Tony Schumacher third round and raced first time finalist Dave Connolly in the finals.

“I think it’s just the atmosphere of Sonoma,” Antron added.  “When you come out here you feel at ease. It’s laid back, the scenery is beautiful. There wasn’t an empty seat in the grandstands and that energy just boosts you up.” 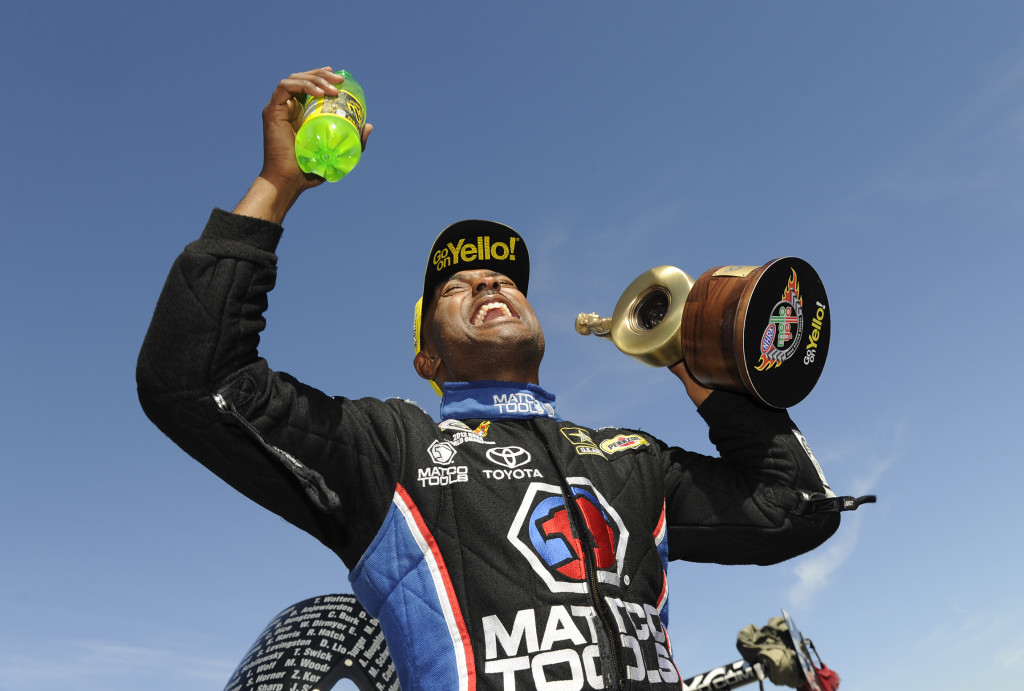 Antron now trails DSR teammate and reigning series champion Tony Schumacher by 37 points in the NHRA Mello Yello standings with only one race left on the Western Swing. 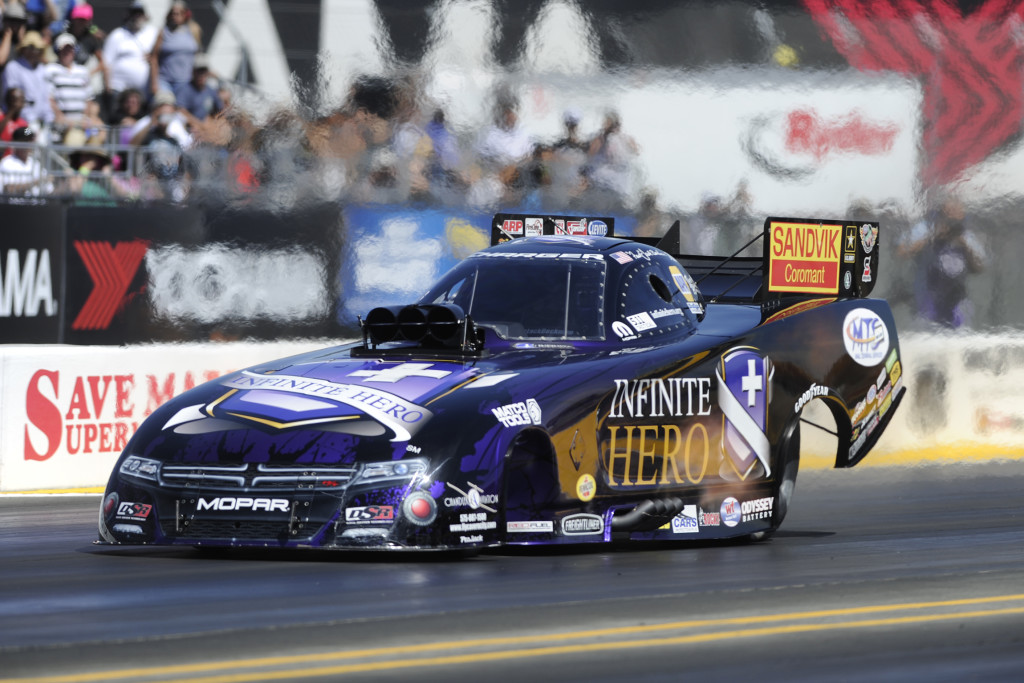 Jack Beckman walked into Sonoma Raceway with a winning stride and that notion didn’t change as he claimed every accolade NHRA offers including a new National elapsed time record of 4.921 seconds and the additional 20 points that go with it.

His Infinite Hero Dodge DSR team is quickly becoming the team to watch in 2015, helped by Beckman taking his third win out of the last four events, and the last to have a chance at the Western Swing title.

The weekend also includes the quickest ever run by a Funny Car when Beckman set the NHRA elapsed time record at 3.921 seconds to pull within 77 points of teammate and points leader Matt Hagan.

“Everything about this win makes it extra special, but I haven’t had a bad win this year,” said Beckman, who earned his second pole of the year and 12th of his career before ending the day with his 20th win.  “If you look at the five wins (this year) they’ve been very, very different and all special.  I don’t know that this will sink in until I’m on an airplane flying to Seattle.” 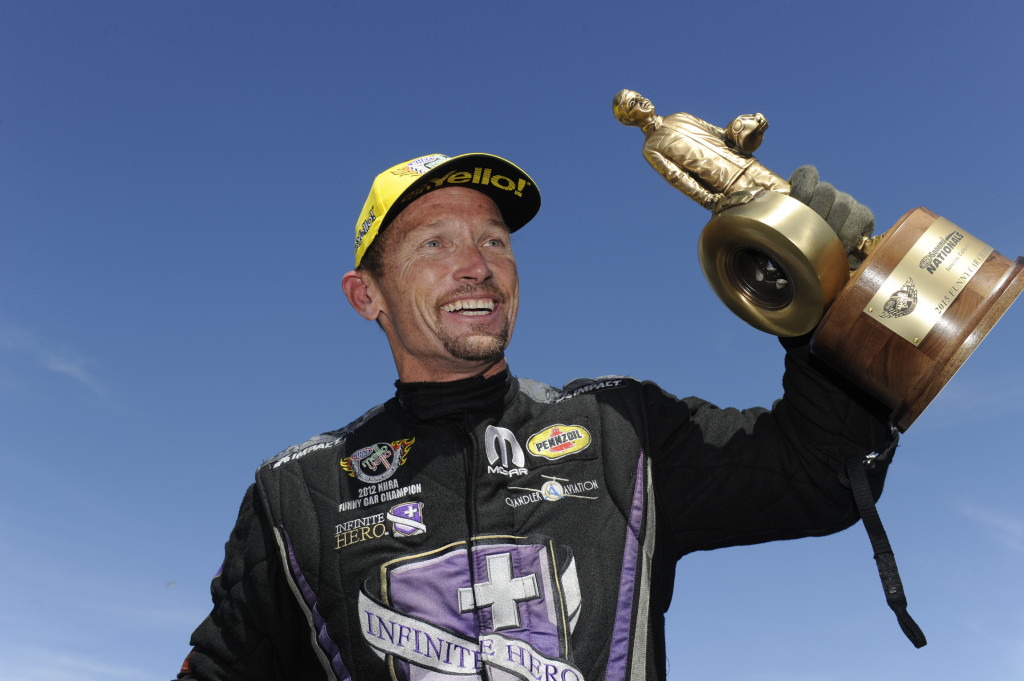 Beckman beat Tony Pedregon, Chad Head, and Robert Hight before tangling with teammate, Tommy Johnson, Jr. in the finals.  He won running a time of 4.037 seconds, 310.63 mph to Johnson’s time of 4.073 seconds, 308.99 mph.  Of Beckman’s eight runs down the Sonoma track, his DSR team ran in the 3-second range on five of them. 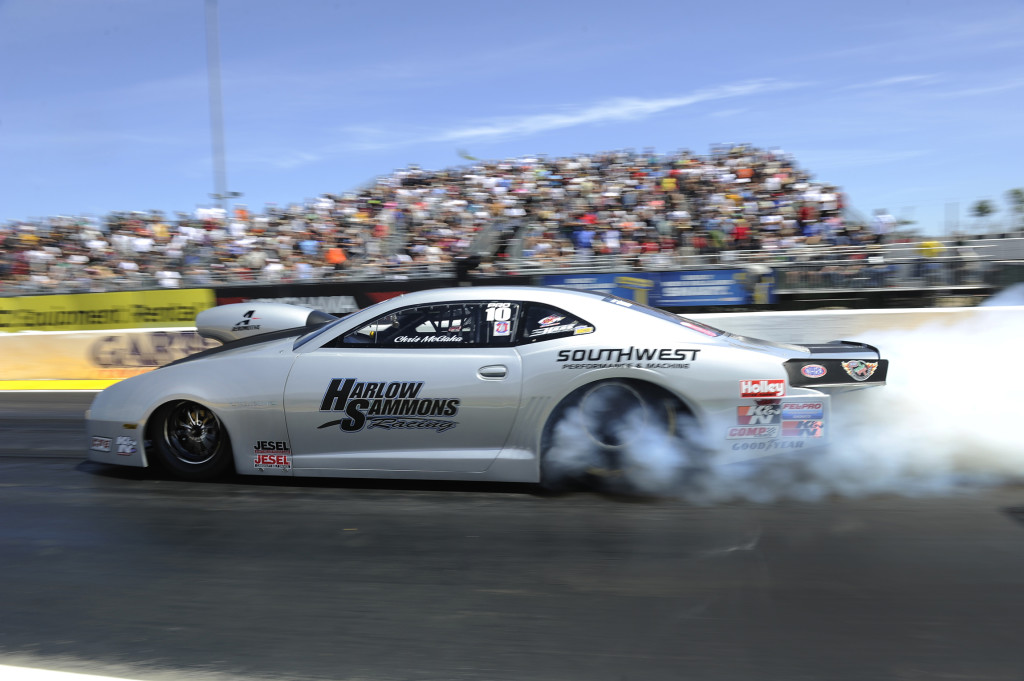 Chris McGaha from Odessa, Texas earned his first NHRA Pro Stock Wally on Sunday at the Sonoma Nationals defeating a tough Jonathan Gray in the finals.

“This was 30 years in the making, and let me tell you, it’s been something,” said McGaha, a former Comp Eliminator driver in NHRA’s sportsman ranks who made his Pro Stock debut at the 2011 U.S. Nationals in Indianapolis and ran a limited schedule until he upped the game to full-time Pro Stock racing in 2014.  “To finally get it done is really special.”

Winning was no easy task for McGaha.  He had to beat V. Gaines, first round, then taking on the herculean task of defeating defending champion, Erica Enders-Stevens, second round.  The climb got harder in the semi-finals going against a returning Jeg Coughlin reaching the finish line first over the five-time champion.

The finals staged, and again, McGaha was on his game with an efficient .024-second reaction time to Jonathan Gray’s .016, and the charging Chevy Camaro quickly made up the difference.  The win light flashed in McGaha’s lane as he tripped the final timer with a 6.531elapsed time at a speed of 212.13 mph to Gray’s time of 6.560 seconds, 211.03 mph. 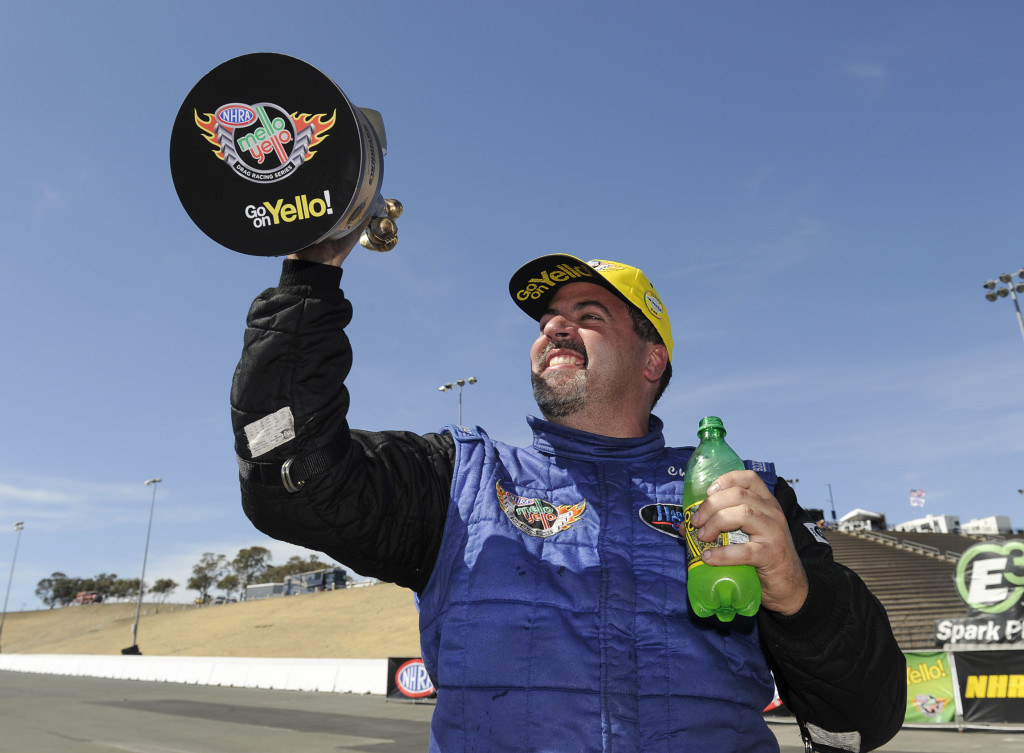 “I knew I was going to win as soon as I put it in high gear,” said McGaha, currently No. 4 in the Pro Stock points.  “You can just see it out the window.  That’s why I’m so hoarse; I started yelling on that last one.” 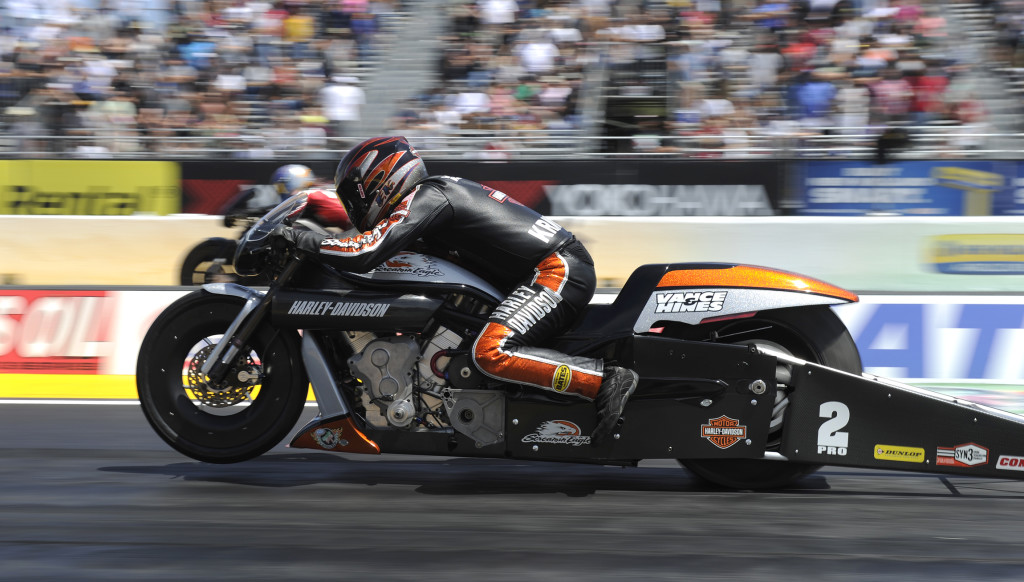 Eddie Krawiec, who also won the NHRA Pro Bike Battle on Saturday, earned his second consecutive Pro Stock Motorcycle win of the season and 29th of his career by riding past Jerry Savoie at the finish.  Krawiec rode his Vance & Hines Harley-Davidson to his second consecutive victory and third overall at this event with a performance of 6.881 at 191.00 to hold off Savoie’s Suzuki, which finished in 6.891 at 194.13.

“I give a lot of credit to my crew chief, Matt Hines, and everyone at Vance & Hines,” Krawiec said.  “They took an outsider and turned him into a race winner and a champion.  Matt is a very unique individual.  He is a thinker, and the way I look at it, he has (97) wins because all of my wins, all of Drew’s (teammate Andrew Hines) wins, and all of his wins count the same because he was a part of them.”

The NHRA Mello Yello Drag Racing Series continues next weekend, Aug. 7 – 9, with the final stop of the Western Swing at the NHRA Northwest Nationals at Pacific Raceways near Seattle. 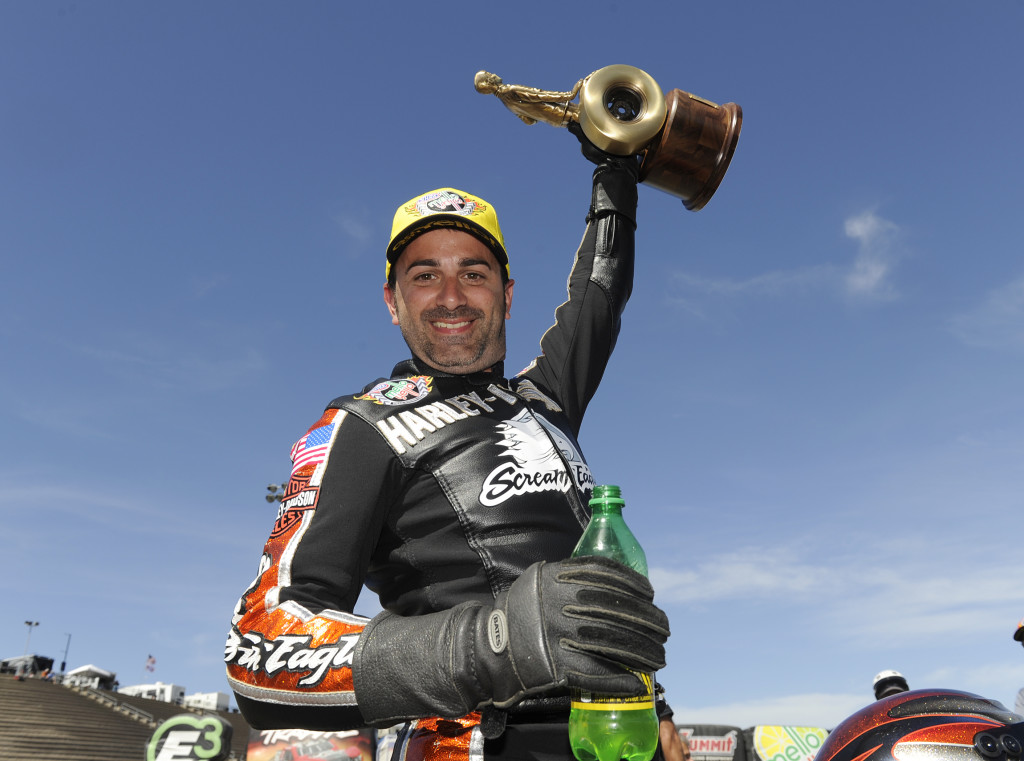