RacingJunk News > Racing > Drag Racing > Brown, Beckman, Anderson, and Hines All Get Their Kicks at Route 66 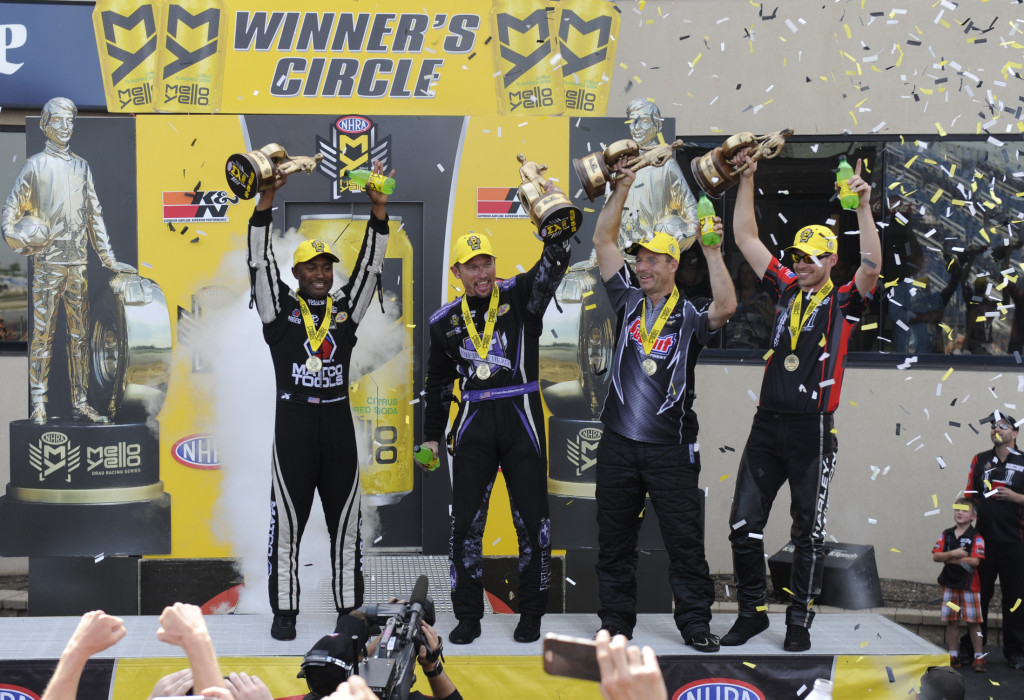 It looked like Antron Brown, Jack Beckman, Greg Anderson and Andrew Hines all got their kicks at Route 66 Raceway on Sunday with winning performances that put them in prime position to start the last six races towards the NHRA Mello Yello Countdown to the Championship.
The next five races take the tour to Denver, Sonoma, Seattle, Brainerd with the final tally summed up at the ‘Big Go’ at Indy. Those teams rallying on the Western Swing will have the presumptive edge going into the Championship in September. 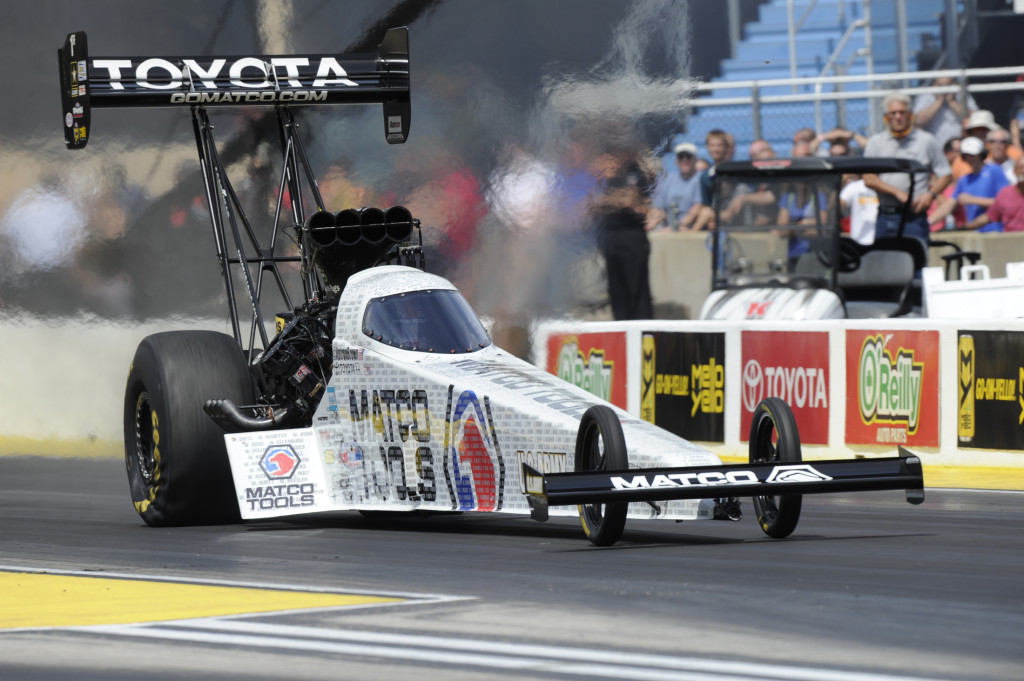 TOP FUEL
Antron Brown has said for the past week that he feels like a gladiator when racing at Route 66 Raceway near Chicago. On Sunday, he conquered Clay Millican, Terry McMillen, Leah Pritchett including JR Todd in the finals to claim his 44th Top Fuel win and 57th overall to take over the Mello Yello points just as the Don Schumacher Racing team heads west.

“I don’t even think about it but it’s good that we got it,” Brown said of the points lead that will have great value for the driver ranked No. 1 when the Countdown to the Championship begins in September and points are reset with the leader 30 ahead automatically.

“Those 30 points are crucial. It’s hard to make up 30 points when you only have 24 rounds of racing to win a championship. That’s two rounds. That’s going to be very crucial and we just have to keep working. Hopefully we can sneak it out and get those points that we need to help us for that title defense.”
Sunday’s Route 66 final round was the fifth of the season and third win for the Matco Tools team led by crew chiefs Brian Corradi and Mark Oswald.

“We are loving it right now,” Brown said. “We are starting to go in the right direction. Our car is responding to everything that Brian, Mark and all these Matco guys are doing to it. We found new things that are making it better. We are on to something and we are just going to keep improving upon that. Our main goal is to come into a race and go out there and be efficient and that means getting every drop out of this lemon every time.”
Now just two points ahead of Doug Kalitta in the points standings, Brown remains strong in his search of his third Top Fuel crown that starts in September. 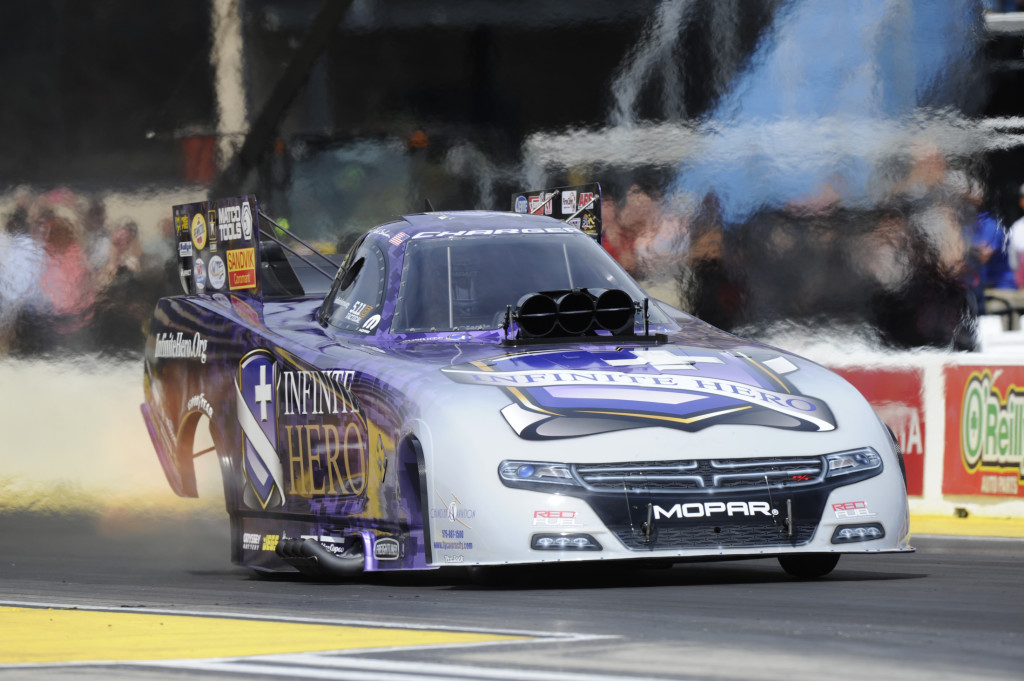 FUNNY CAR
For such a dominant performer, it’s hard to believe that’s it’s been 10 months since the Reading race that Jack Beckman, the 2012 NHRA Funny Car champion, has last won a Funny Car race (15) before Sunday’s K&N Filters Route 66 Nationals in nearby Chicago.

“It’s a little bit frustrating to have been the only one of our DSR Funny Cars that hadn’t closed the deal when Capps seems to be winning every weekend, (Matt) Hagan had multiple wins and Tommy won,” said Beckman, winner of NHRA’s 800th Funny Car event. “We knew we would find it.

“Even though we had been to three final rounds this year, we really didn’t have our car. This year we had never made it more than 200 feet in any of those final rounds, and we were struggling. We set the national record this year, qualified No. 1 four times this year, but we just couldn’t put it together.”

The Infinite Hero Dodge drove roughshod over the field lowering the boom on the Funny Car field with low 3.90s all day daring to be challenged. Beckman marched through eliminations beating John Hale, Courtney Force, Robert Hight before the match up with Ron Capps in the finals.

His team led by Jimmy Prock, John Medlen, and Chris Cunningham played it smart in the Wally Round with their pass of 3.955 seconds, 324.05 mph only to see the most consistent Capps, who claimed his 600th round win in the quarterfinals, go up in tire smoke at the half track mark.

“The car was just darn near flawless out there today,” said the 23-time winner in the class. “This doesn’t mean we’re going to be dominant at the next race, but it means I’ll feel a lot more confident when we pull through the gates knowing we can make consistent runs. Once you start making the consistent runs, you can turn the wick up and make quicker runs.”

Capps still has a 126-point lead with Beckman now in second place followed by Courtney Force. 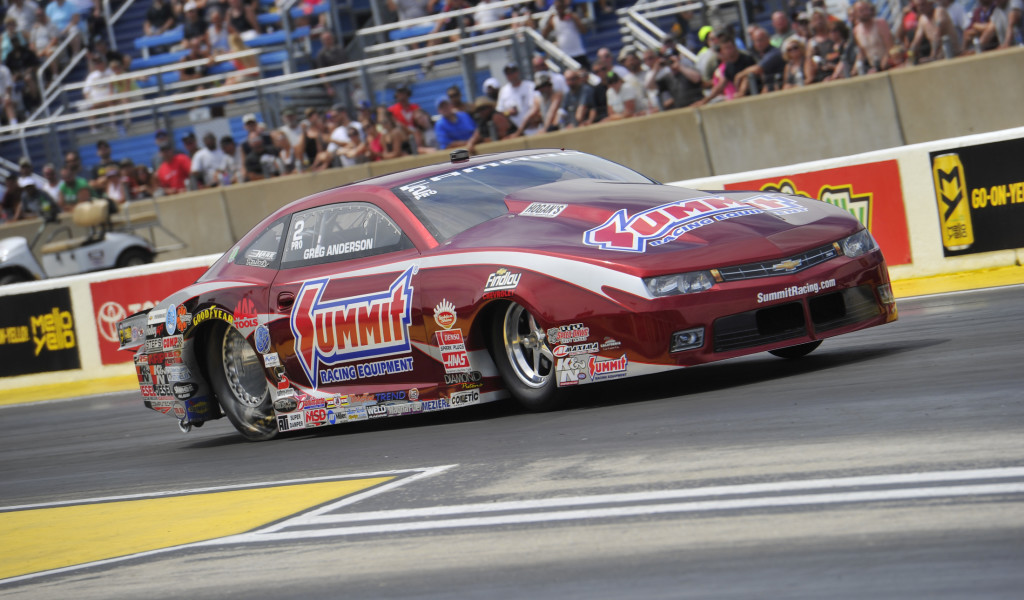 PRO STOCK
Greg Anderson continued the KB Racing dominance winning the Pro Stock division of the Rt. 66 Nationals this time taking down Bo Butner in their 13th consecutive final round and his sixth victory of the season.
Now Anderson is reaching very closely to attaching his name to gear-jamming greatness winning his 84th race, one shy of tying the legend, Bob Glidden.

He raced to the finals taking out David River, Allen Johnson, No.1 qualifier, Shane Gray before seeing Butner in the money round. Anderson left first covering the quarter-mile in 6.644 seconds at 209.01 mph with Butner trailing at 6.667 seconds, 209.17 mph in his eighth consecutive final round appearance.

“We basically out raced them today and we just flat found a way to win each round,” said Anderson. “That’s what it’s all about. Couldn’t be more proud of the guys. It is certainly our hardest-fought win of the season. I am looking forward to the battle that’s coming. This Western Swing should be a real battle.”
Anderson and teammate Jason Line have now won 13 consecutive events, tying the record for most consecutive wins by a race team in NHRA history, as well as the same record in Pro Stock. The mark equals their team winning streak in 2004 as well as the Vance & Hines team streak of 13 straight wins with Eddie Krawiec and Andrew Hines in 2011-’12.

“We saw some teams make big progress here this weekend and we will have a new landscape coming up for the Countdown,” said Anderson, who now trails series leader Line by 80 points. “I am sure of it. We are going to have to go home and dig and work hard and get ready for the Western Swing.”
Cashing out with the win today, Anderson now trails KB Racing teammate, Jason Line by 80 points with the Western Swing up next. 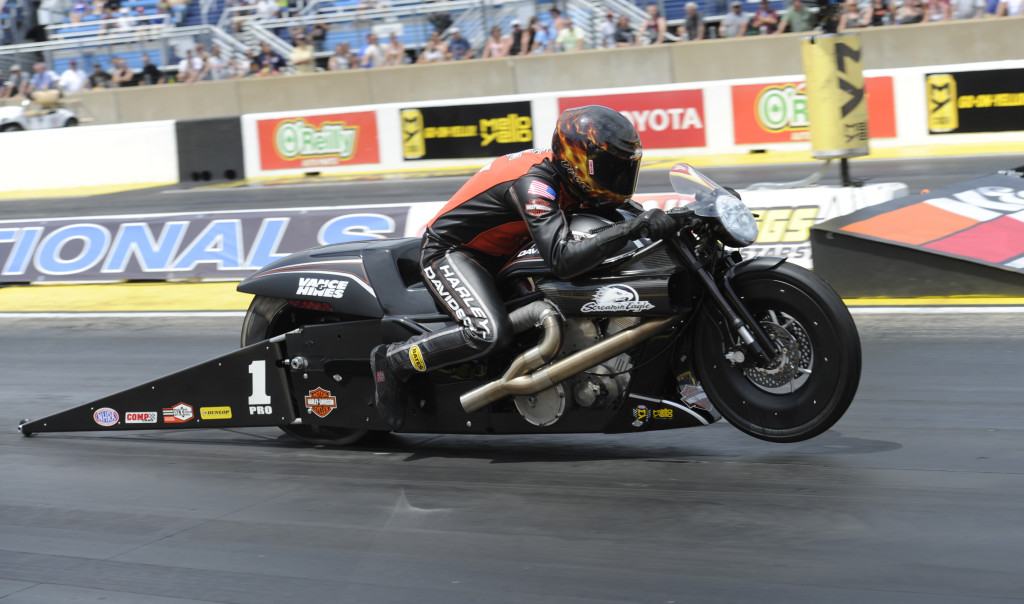 PRO STOCK MOTORCYCLE
Andrew Hines claimed his second Pro Stock Motorcycle victory of the season and 44th of his career, tying him for most victories in the history of the two-wheel class with the late Dave Schultz. He outran Angelle Sampey in the final round, clocking 6.858 seconds pass at 194.91 mph on his Vance & Hines Harley-Davidson, to the 6.893 elapsed time at 193.40 mph produced by Sampey’s Star Racing Buell.
Hines advanced to the final with round wins over Chip Ellis, Michael Ray and Steve Johnson.

“We had a good motorcycle all weekend it was just a matter of making the straight, consistent runs that we needed to,” said Hines of his third Chicago win. “That’s what allows you to go out there and turn on four win lights. I’ve always loved this track and I always seem to excel at the hot racetracks. You have to be on top of your tune-up these days and you can’t cut anyone any slack.”
Krawiec still holds a commanding 134-point leader over Harley teammate Andrew Hines with Angelle Sampey in third.
The NHRA Mello Yello Drag Racing Series continues July 22-24 with the Mopar Mile-High NHRA Nationals at Bandimere Speedway near Denver.