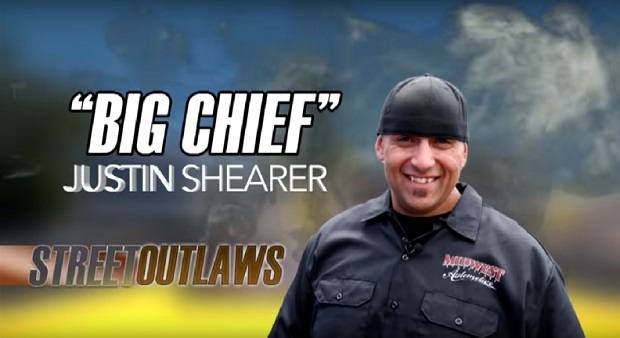 Justin “Big Chief” Shearer has made a name for himself on Discover Channel’s “Street Outlaws” where he challenges other builders and racers to “street races” in controlled environments. The show, and the teams and builders, are wildly popular. However, participants have been criticized for encouraging illegal street racing, and a former contestant was involved in a fatal accident last year.

Shearer himself was involved in a crash during the filming of an episode, highlighting that even on a production set, street racing (and drag racing in general) can be a dangerous sport.

As a result, it’s great to see him partnering with the NHRA to promote sanctioned drag racing at local track nights in a PSA that will air this weekend at the Summit Racing Equipment NHRA Nationals at the track, and air on FOX Sports 1’s coverage of the race weekend.

“We are so pleased Justin wanted to do this with the NHRA to encourage all his fans to race legally at NHRA member tracks,” said Terry Blount, NHRA vice president of communications and public relations. “I know he had a blast at Englishtown at the NHRA Summernationals, and it was clear watching him walk around the pits that so many of our fans love him. The PSA by Justin is a way to emphasize the NHRA’s message, which always has been about including everyone and racing legally.”

Shearer is even considering building a race car for one of the NHRA professional categories.

“This is a big step for “Big Chief” and a way for us to let all his followers know that we want them to be a part of NHRA and share all the great things we have going on here,” Blount added. “We believe this new relationship with Justin, and his PSA message to everyone, will serve the greater good for all drag racing competitors and fans.”

About Andreanna Ditton 183 Articles
Andreanna Ditton is the Content Manager for MotorHead Media and the Editor-in-Chief for RacingJunk.com/news. She's been working in the automotive publishing industry since 2007 focusing on racing and performance for motorcycles and cars.