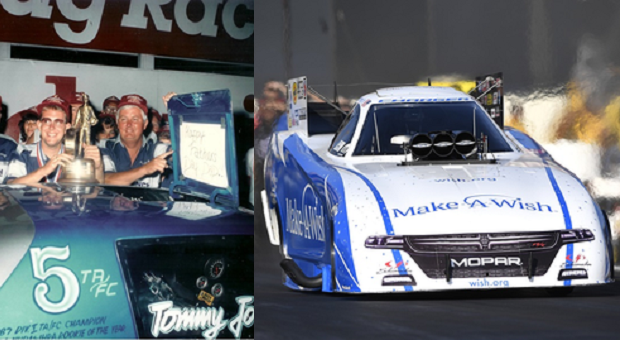 The drag racing season is in full swing and the stars of the National Hot Rod Association (NHRA) are in the process of burning up tracks across the country. We recently caught up to a popular Funny Car driver to find out how he drove his way to the big leagues of the NHRA and how certain people in his life gave him the direction and passion to get there.

Don Shumacher Racing’s own Tommy Johnson Jr. began his racing career alongside the man who passed along his passion – drag racing – when he was a young boy growing up in Iowa. While spending most of his time alongside his father Tommy Johnson Sr., who spent as much time as he possibly could rising through the ranks of the drag racing world, Johnson Jr found the sport of which he was destined to be a part.

After aiding his son in the start of a career that would lead to his competing in the high ranks of both Top Fuel and Funny Car, Tommy Johnson Sr. used his new-found talent to make yet another positive impact on people impacted by cancer.

Tune in to the latest edition of Behind The Wheel and let this legendary father/son drag racing team tell you more about themselves and how this sport helped them pave a way to a happy and successful future.

Keep up with the latest on Tommy Johnson Jr. and all of your favorite NHRA drivers at NHRA.com.

1 Comment on Behind the Wheel Podcast: Episode 9 Tommy Johnson Jr and Sr