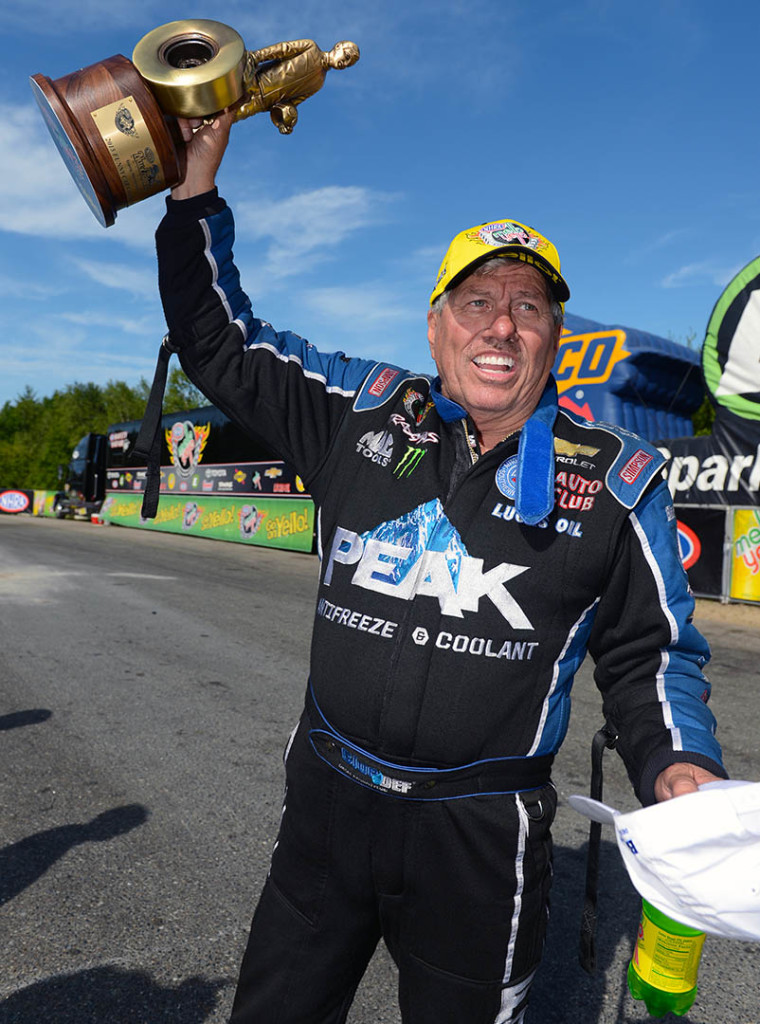 The 2016 racing season is getting ready to fire up and in order to gear up your interest, we are sliding Behind The Wheel with those motorsports legends out there who not only fueled our fire for this sport in the past, but keep reminding us why this fire can never be extinguished. One such driver has one of the most well-known names in the National Hot Rod Association (NHRA). 16-time Funny Car champion, John Force began his career like many who have big dreams.

“Like many of my fellow family members, I was a weekend drag racing warrior in California, who was competing in anything that I could get behind the wheel of when I was in high school,” said Force. “I guess you can say that I had a need for speed.”

So how did this weekend warrior get his first start in what would become a very successful future?

“In 1975, I bought my uncle’s Chevrolet Nova and I started racing in the International Hot Racing Association (IHRA) Circuit,” said Force.

Although he struggled for the first few years, including a rather frightening moment in Australia where his Chevy Nova Funny Car was left engulfed in flames, Force was determined to rise to the big leagues of drag racing. “Although I was able to walk away unharmed, I have been on fire from here to Australia ever since,” jokes Force.

Despite his setback, Force continued to do what he loved most – race. In fact, Force finally won two championships in the IHRA before moving to the big leagues of the NHRA and sliding into his second Chevrolet – a hard changing Chevy Corvette. Much like his first starts n the IHRA, Force struggled in his first series of Funny Car runs in the NHRA, with his first nine seasons resulting in a serious lack of wins. Although he was looked down on as a half-baked racer, who spent more time blowing his engine and throwing parts all over the track, than actually competing to win races, Force didn’t let that stop him.

“It wasn’t until 1985 that I began to see things change,” said Force. “Under the leadership of my new crew chief Austin Coil, this team started to see some success, including three final-round appearances in 1986.”

With this driver and team’s continued ‘never say die’ spirit, Force would begin to rack up the wins as the years went on and this would eventually lead to his first NHRA Funny Car championship in 1990.

Force would pick up another championship in 1991, before losing out to fellow NHRA legend Cruz Pedregon in 1992. “Cruz gave me a real challenge in his hamburger from hell car that season,” said Force.

Although Pedregon would be the dominating competitor in 1992, Force would find his way back to the top of the podium, in his new Oldsmobile Cutlass Funny Car, and would remain there until 2002.

“No other team in history could claim 10 championships at that time except the New York Yankees,” said Force. 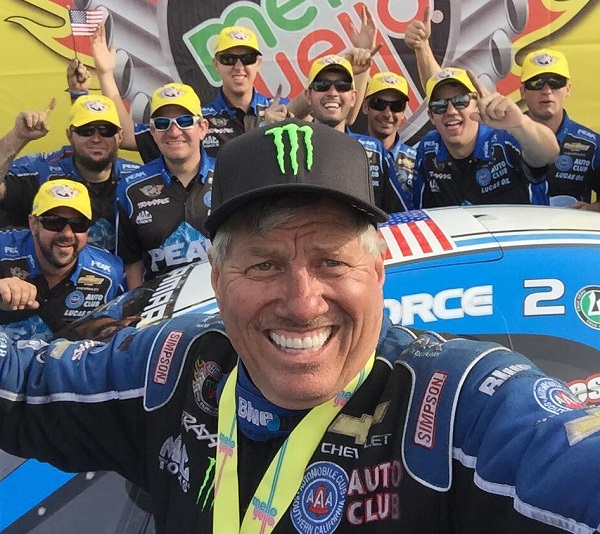 During his successful years, Force would also begin to see his John Force Racing team grow from the ground up. In 1996, Cruz Pedregon’s younger brother Tony would join Force in a second vehicle before longtime friend and fellow drag racer Gary Densham would join in a third.

This partnership would ultimately lead to Force’s first drag racing world title as a team owner in 2002. Although, Pedregon would ultimately move on to race with his family. John Force didn’t only witness his own career skyrocket to the top over the next few years, including six additional Funny Car championships as well as an induction into the Motorsports Hall of Fame, he would also see his John Force Racing drag team continue to successfully evolve. 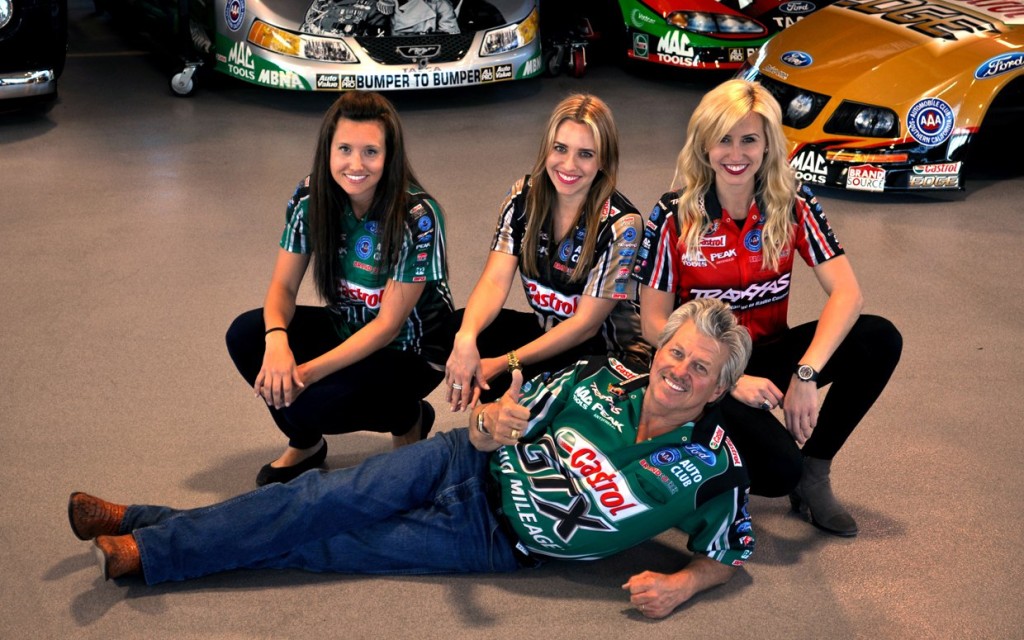 “It’s funny because I never even pushed any of my daughters to compete,” said Force. “They were just around this sport the entire time that they were growing up and obviously feel the same need for speed that I do.”

The racing fuel obviously runs through the veins of each member of the Force racing family as daughter Courtney became the winningest female in Funny Car history after besting her father, John Force, in Somona in 2014.

John Force Racing’s current Top Fuel driver, 29-year-old daughter Brittany Force, has also found success since her first days on the circuit. Especially, after learning from her older sister Ashley Force Hood, who was the first Force daughter to compete and defeat her father in a Funny Car.

“I even have a granddaughter who has started running Jr. Dragsters,” said Force. “So I guess you can say that this sport just runs in our family.”

Not only has John Force been a positive influence on his successful daughters and teammates, but on other rising NHRA stars as well. 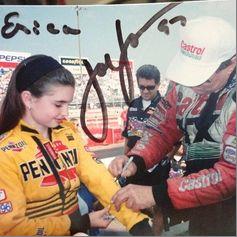 “I was traveling the country competing with my family tam in a Jr. Dragster when I was just coming into my teenage years,” said Enders. “It was an amazing feeling meeting my hero driver and an even more amazing feeling now to know that he is still racing.”

For those who think that the once talented football player turned amazing driver, John Force, has any intentions of hanging up his fire suit, you are sadly mistaken.

“We are still here and are still successful,” said Force. “I intend for myself and my entire team to be a success far into the future, especially with sponsors like Peak who will be my primary sponsor this season.”

So, although Force’s chosen Super Bowl Winning Quarterback Peyton Manning may be calling it quits after his 2016 season, don’t count on seeing this champion winning driver anywhere but the winner’s circle for years to come.

Stay tuned to find out more about the John Force Racing family in upcoming editions of Behind The Wheel. As the 2016 race season continues, we will be jumping Behind The Wheel with more motorsports legends. If you would like to see your favorite legend featured, please contact us at [email protected]