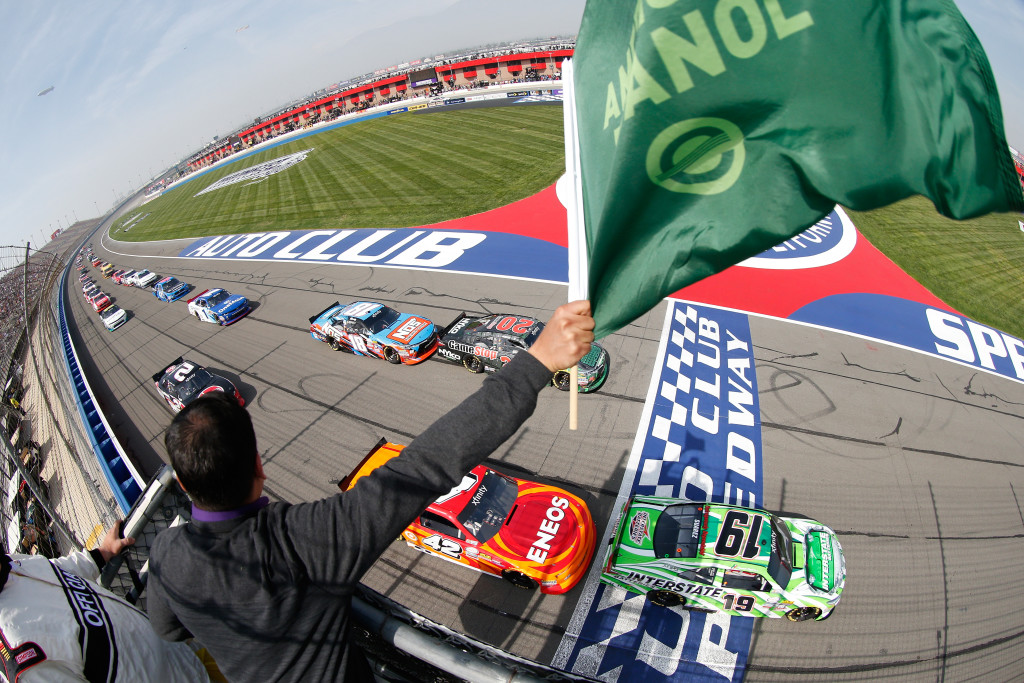 Kyle Busch’s streak to win four NASCAR Xfinity races in a row came up just a half straightaway shy, only to see his hopes go by the wayside after Austin Dillon slipped by on the outside to win the Treat My Clot 300 at the Auto Club Speedway in an unbelievable finish.

The Joe Gibbs Racing operation of Busch, Erik Jones and Daniel Suarez were running 1-2-3 in the waning laps, appearing to be on another rout of the Xfinity field matching their last two events.  The JGR three-pack were in a severe fuel saving mode last pitting under yellow on lap 100 of the 150-lap distance.

First off, it was Jones losing fuel pressure with three laps to go, sending him to pits.  Then on the White Flag lap, Busch blew a left front tire going into turn one, trying desperately to steer his Toyota on three wheels being passed by teammate, Suarez to take the lead down the backstretch.  Before this duo could reach the third turn, Busch powered ahead of Suarez as he ran out of gas. 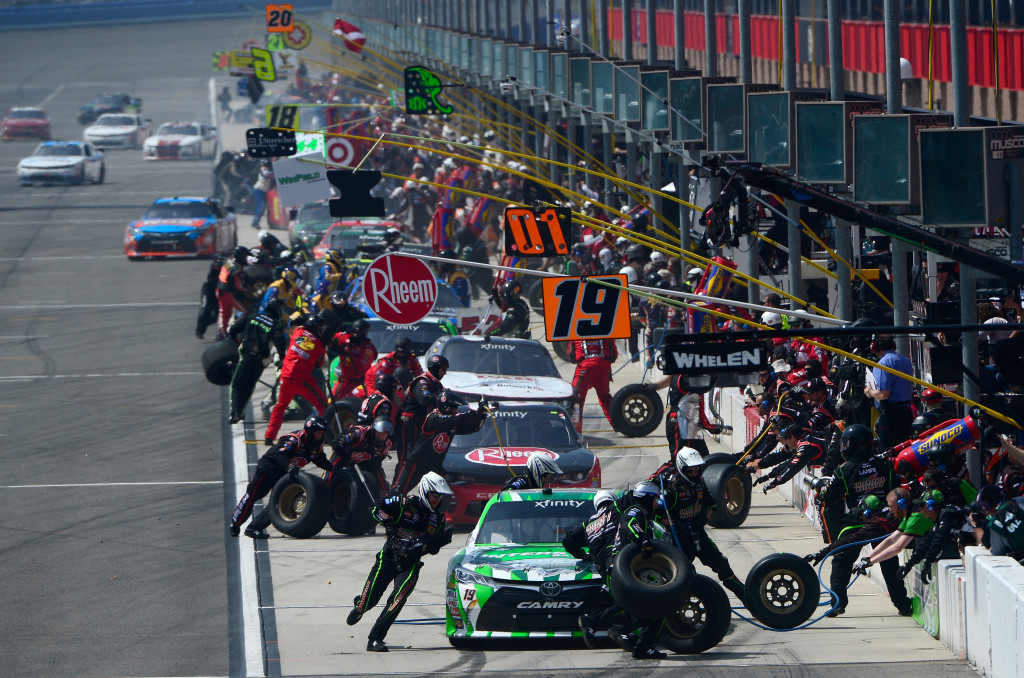 Lurking back in fourth, 12 seconds behind was Austin Dillon who had sacrificed track position to save the one lap of fuel needed to complete the distance was now charging to the front.  Busch’s attempt to tie NASCAR’s great Sam Ard’s win streak was still up for grabs before Dillon caught him, passing high off turn four with Busch nearly out of control clipping Dillon’s left rear, but not enough to slow him down for him to see his seventh Xfinity checkered flag.

“I’d rather be lucky than good,” Dillon exclaimed, not believing his good fortune of leading only one lap, the last one.  “Well, I just had to stay focused.  They (My team) said he (Busch) had a flat.  I was worried about our fuel and stayed focused on that the whole time.

“He tried to screw me right there at the end, but it didn’t work out for him, did it?  I’m proud of these guys.  Man, that was fun.  I didn’t think we had a car to do that, and we didn’t, but we did what we had to do to win the race.  Sometimes things just go your way, and today it definitely did.” 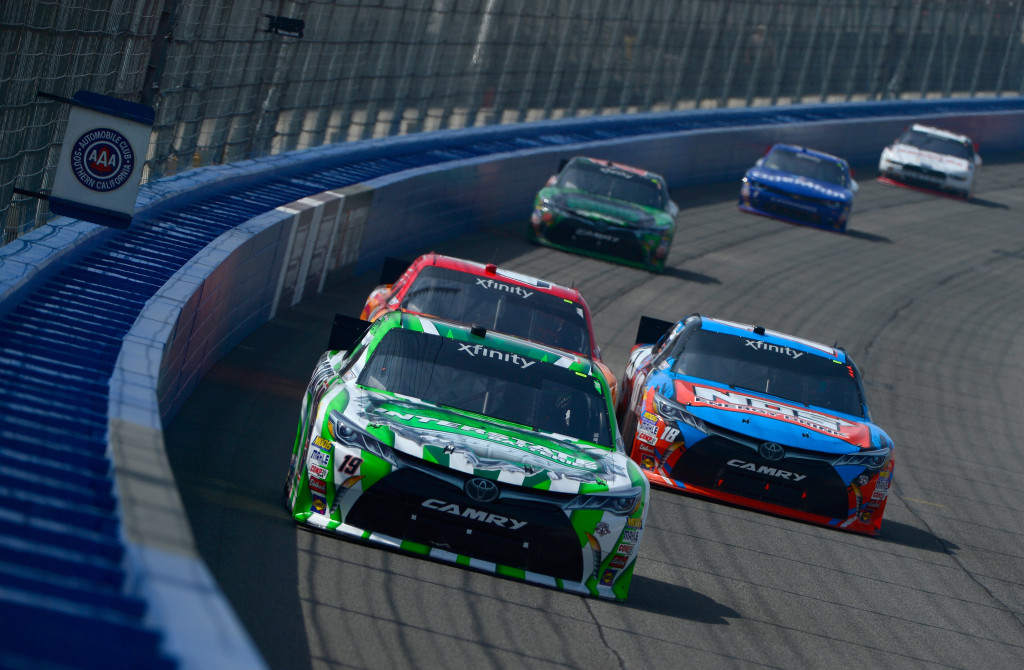 Busch, frustrated after leading 133 laps, being so close to setting the record climbed out of his car and immediately went to the garage area after the race bypassing all the media.

Suarez coasted home fourth, but at one point, looked like he was going to finally grasp his first win of his career before his fuel tank ran dry.

“I was just trying to save as much as I can.  I passed the 18 when he blew the left front tire in (turns) one and two, and on the exit of two, I ran out of fuel, and on the entrance to three, seeing Dillon and the 18 passed me back.  Very unfortunate, but its part of racing.  I really think that our first victory is coming and hopefully we can get it very soon.” 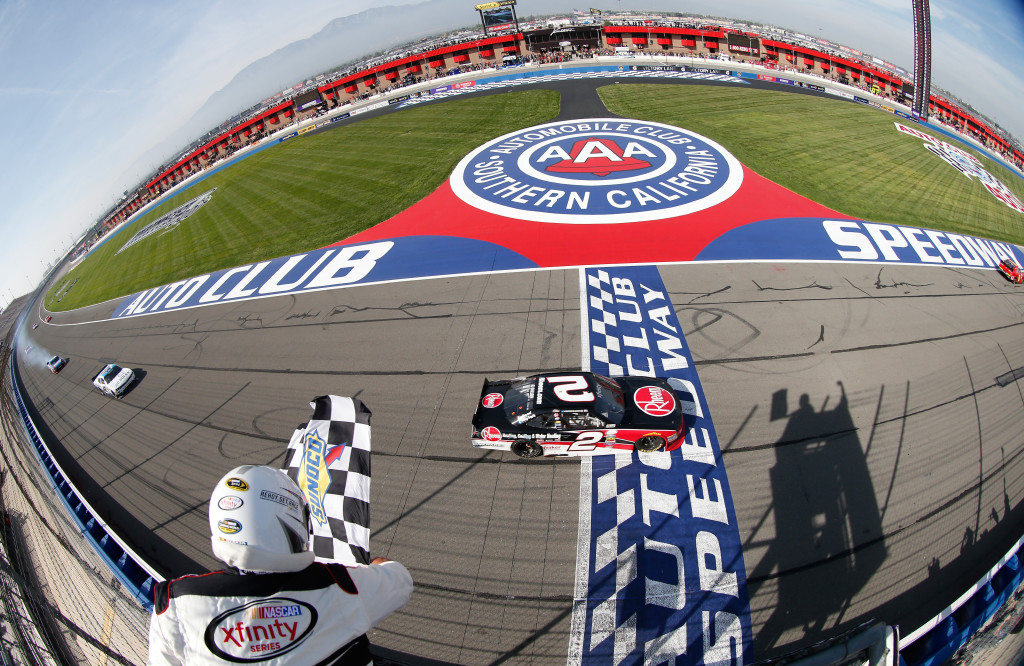 After all the post race confusion, Darrell ‘Bubba’ Wallace, Jr. crossed the finish line in third, Suarez fourth and Elliott Sadler in fifth.

So far, the series is still looking for an Xfinity regular to win and after four completed races; Suarez has a 10-point lead over Sadler, followed by Justin Allgaier, Brandon Jones, and Ty Dillon.

The average speed of the Treat My Clot 300 was 143.008 mph being slowed by four caution flags for 16 laps.  There were 12 lead changes eight drivers.

The NASCAR Xfinity season takes off for the Easter break and resumes on Friday, April 8, for the running of the O’Reilly Auto Parts 300 at the Texas Motor Speedway airing on FOX Sports 1 at 8:30 p.m.