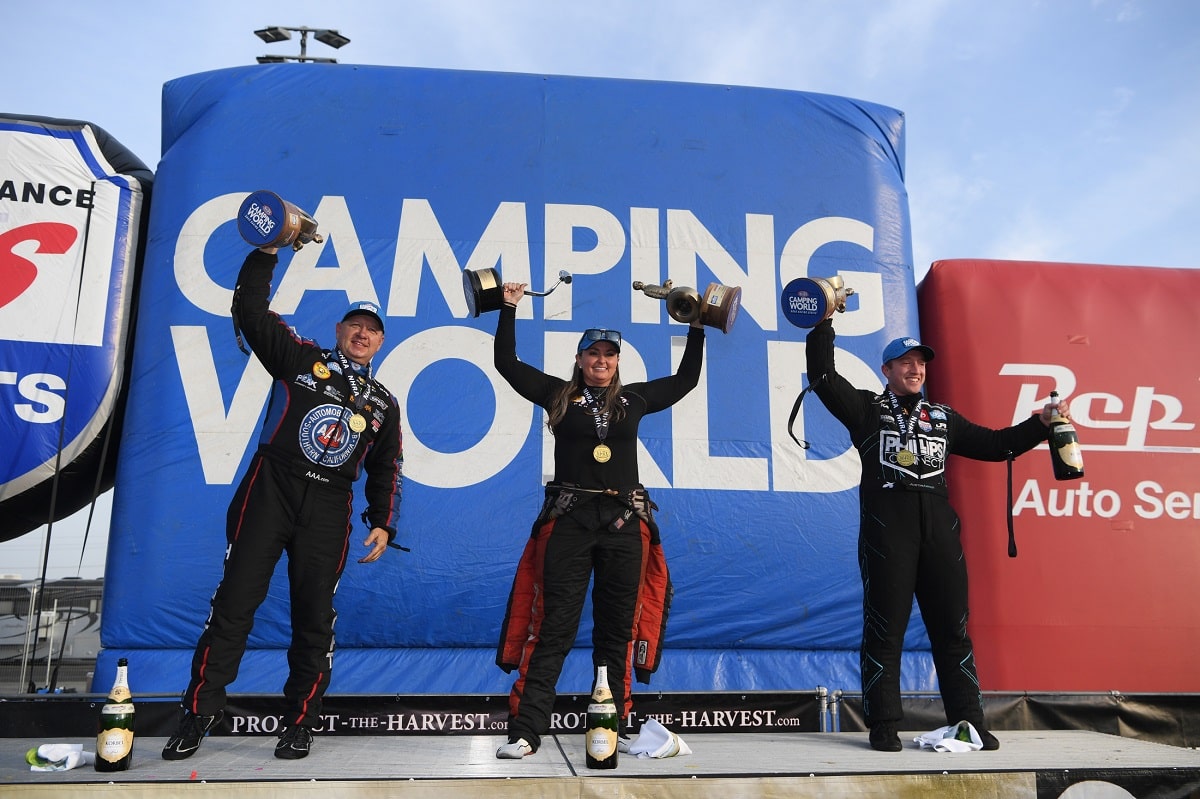 The Lucas Oil Winternationals kicked off the 2022 NHRA Camping World Series  at Pomona this past weekend with new teams, new liveries and big dreams.

The Super Bowl is over, which means it is time for racing engines to heat back up. While NASCAR celebrated its Super Bowl of racing at Daytona this weekend, the real heat was found in Pomona, CA where the 2022 NHRA’s Camping World Drag Racing Series  kicked off its 71st season of drag racing at the Lucas Oil NHRA Winternationals presented by ProtectTheHarvest.com. Welcoming new fans, teams, and sponsors to Auto Club Raceway, this season’s opening racegave three drivers their first hard-fought victories of the 2022 season. One of the most exciting of the weekend came from the head of the class – the Top Fuel division which was a battle of the young guns. Although Justin Ashley may have been forced to sit out the final round of the 2021 Winternationals due to heat exhaustion, one of the youngest drivers in the series drove to redemption after taking down Austin Prock with a final pass of 3.69 to 3.71 for his first victory of the season.

While the Top Fuel series gave glory to the newest drag racing stars, Sunday’s Funny Car final round saw two legends proving that they still have what it takes. Robert Hight and Ron Capps also became the only two drivers left standing for Sunday’s final round. As the two champ rolled up to the starting line, it would be Hight who would drive away with the win even after overcoming a starting line scare.

The final opening race would give yet another driver the chance to overcome a hurdle to drive to redemption. After coming into the 2022 season with a pretty big chip on her shoulder, thanks to having to surrender the 2021 championship to Greg Anderson and his rival KB Racing squad, Erica Enders drove to her redemption following Sunday’s final round. After a dominating performance in Pomona, which included the top two qualifying spots and an all-team final, Enders would collect her 34th Pro Stock title and a special bonus Hurst shifter-topped trophy for NHRA’s 900th Pro Stock event after Aaron Stanfield’s ride refused to take off and Enders finished her first race weekend of 2022 with a 6.55-second pass. 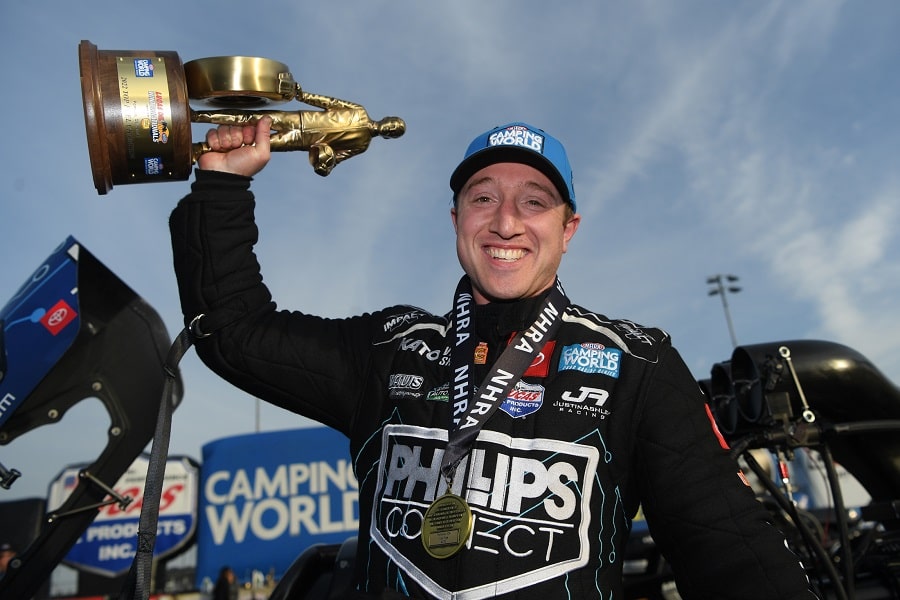 Prior to racing to his first victory of the NHRA’s 71st season, Justin Ashley’s new Phillips Connect dragster, tuned by championship crew chiefs Mike Green and Tommy DeLago, looked strong in eliminations with a pair of 3.69-second passes in the first two frames to take down Jim Maroney and new team owner Antron Brown. Prior to racing to Sunday’s final round, Ashley would have to line up against the 2021 Top Fuel champion Steve Torrence. Thanks to an impressive 3.702-second pass, Ashley dethroned the former king and drove onto the final round against Prock. In a thrilling final round matchup featuring Ashley, the 2020 NHRA Rookie of the Year, and Austin Prock, the 2019 Rookie of the Year, Ashley came out on top with a run of 3.694-seconds at 314.53 mph in his 11,000-horsepower Phillips Connect dragster to slip past Prock’s 3.713 at 333.00 mph.

“I knew that the Top Fuel field was going to be really tough this season,” said Ashley. “In fact, I saw it this weekend where races were separated by such little margins. We really had no layups at all, so to be able to beat guys like Jim Maroney, Antron Brown, Steve Torrence, and Austin Prock just solidified what we came out here and wanted to do. We spent the offseason trying to work on power, pick up and get to where we want to get to, and I feel like this weekend you could see that. I am looking forward to seeing more of this throughout this season.” 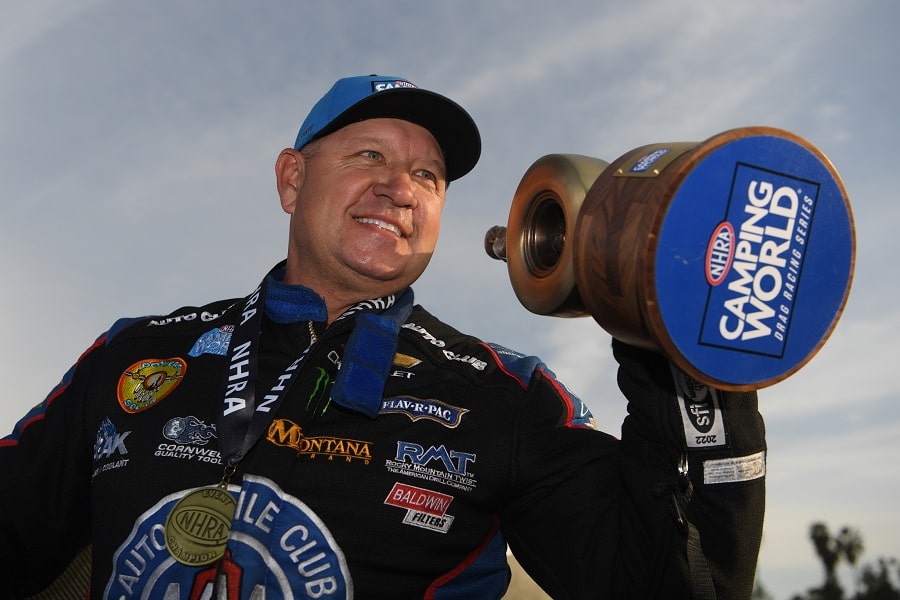 Before having to take down 2021 Funny Car champion Ron Capps to race to his first victory of the 2022 season, Robert Hight would use a pair of 3.89s to defeat Jason Rupert and Tony Jurado before racing to the semi-finals against Matt Hagan. Although Tony Stewart Racing’s newest driver, Hagan, put up one heck of a battle, another one of Hight’s 3.89-second passes would put in Sunday’s final round against long-time nemesis Ron Capps. Feeling confident for his final round pass, Hight and his John Force Racing team almost threw it all away after a brief starting-line scare when the throttle hung up quickly as crewman Trevor Huff lowered the body, Hight gathered his composure and raced away for the 3.86 to 3.88 win, the 54th of his career, eking past Capps holeshot-aided effort by just .002-seconds.

“When he came down, he hooked the injector. It hasn’t been coming down straight and he hooked the injector with the body. Luckily, I had a hold of the brake. It could have been way worse if it would have jumped 10 feet or something. I didn’t know if we going to shut this thing off., but we got the job done,” said Hight. “It was kind of a weird win, I’ll give you that, but a win is just that and I am so grateful for it.” 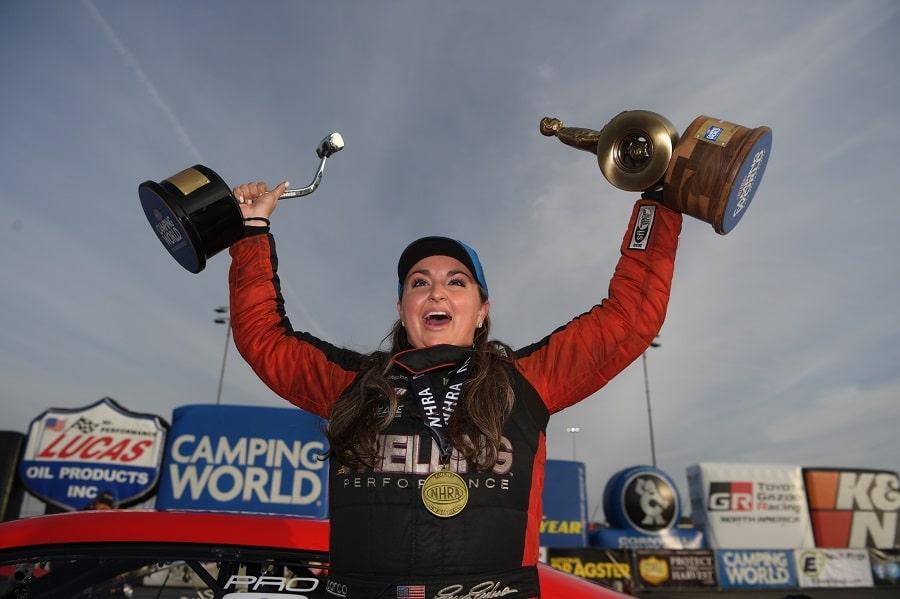 Hight wouldn’t be the only NHRA legend to race to an unforgettable victory in Pomona. Erica Enders Elite Performance team came into the 2022 season with a pretty big chip on their shoulders after having to surrender the championship to Greg Anderson and the rival KB Racing squad last year. Thanks to a dominating performance at Pomona, which included the top two qualifying spots and an all-team final, Enders found both her redemption story as well as her mountain top.

After qualifying No. 1 with a 6.521-second pass, Enders’ red Melling Camaro powered to passes of 6.55-seconds and a pair of 6.56s to defeat Cristian Cuadra and the KB Racing entries of Dallas Glenn and even her nemesis Greg Anderson. While many were betting on Anderson to repeat his 2021 dominance over Enders his Hendrickcars.com Camaro lost traction at the top end, forcing him to lift, which gave Enders the chance to drive to redemption.

While things looked good for Enders to race to her first victory of the season, she would have to overcome a final round pass against the reigning NHRA Factory Stock Showdown world champion and defending Winternationals winner Aaron Stanfield. While Stanfield qualified just behind Enders with a 6.527-second pass, and a pair of 6.56s to trailer Troy Coughlin Jr., Rodger Brogdon, and Fernando Cuadra Jr., Stanfield’s impressive run stopped during Sunday’s final. Thanks to an ailing ride Stanfield would have to abort his final weekend pass giving Enders the chance to collect her 34th Pro Stock title.

“This is my 18th season in Pro Stock so this one is very significant,” said Enders. “I mean you treat every race day the same, but this victory means a lot to me, especially because I wasn’t sure until two weeks ago if I was going to be able to race here after having surgery on a torn arm tendon over the winter. My only hiccup was my light in the final. I went up there and I pre-staged and I always take a deep breath and I pre-stage and the way that the weather changed my glasses completely fogged up. I was scared to go red because we were [.012, .013, and .016] on Sunday so I just I missed the tree. I wanted to keep all my lights under [.020] today, so three out of four is not bad.”

The running of 71st season of the Camping World Drag Racing Series season will continue next weekend, February 25-27 at the NHRA Arizona Nationals at Wild Horse Pass Motorsports Park in Chandler, AZ. Stay tuned to RacingJunk.com for all your NHRA coverage!