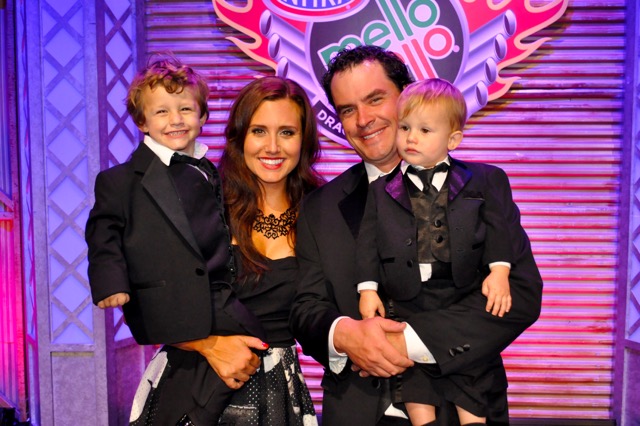 Force Hood’s day to day role will continue to revolve around entertainment production and commercial development, but she will also be more involved in the racing side of the business as time progresses. The two-time U.S. Nationals Funny Car champion continues to stay active with a current Funny Car license and would be available to step back into the driver’s seat but for now the active mother of two is content to be an advisor and confidante for her two racing sisters, Brittany and Courtney.

“There will be no noticeable change as far as how we are doing business. Ashley will continue to build and manage the entertainment area of the John Force Racing company. It just made more sense to have one company since most of the entertainment business revolved around racing projects for our sponsors or for our own use. She is coming to more races as Jacob and Noah get older and we have a fire suit and helmet in the haulers for her if we needed it,” said John Force, 16-time Funny Car champion and company founder.

John Force and JFR President Robert Hight will continue to drive the business development and race operations business for John Force Racing, Inc., which recently won its category best 238th Funny Car title at the SummitRacing.com NHRA Nationals and also secured a five-year extension with the Automobile Club of Southern California. Progress continues to be made on the impending announcement of a major sponsor for John Force Racing’s lone Top Fuel dragster driven by Brittany Force.

“We took a big hit a year and a half ago on the sponsor side but Robert and I have been working around the clock seven days a week for over a year to rebuild our sponsor deals. We brought on Peak Antifreeze, Lucas Oil and Chevrolet and we continue to develop our relationships with Auto Club, Mac Tools, and Traxxas. We are working with JMI to bring in some more new business, but everyone is looking for sponsors so it takes some time. Having the entertainment business working more closely with the racing business will only make us stronger in the future,” added Force.