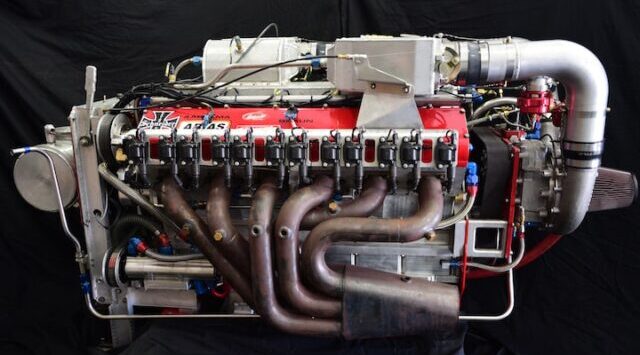 Hidden away in an unassuming pocket of industrial San Diego lies the workshops of Pete Aardema and Kevin Braun, who specialize in making overhead camshaft conversions for race cars. They’ve constructed some out-of-the-ordinary power plants for use on the Bonneville Salt Flats and wherever racers converge to set new records – whether on land or sea.

Aardema, a life-long tinkerer and Braun, a machinist have come up with experimental fusion engines that have broken a slew of records on Utah’s Bonneville track outside Wendover, Nevada/Utah. With a quest to mate such iconic blocks as the Ford Model A or the big block Chevrolet to overhead camshaft heads – the duo are not fans of pushrod-type engines – Aardema and Braun have attempted some very unusual mechanical marriages.

Aardema started his career in the boat business, but soon discovered a desire to apply the technology of overhead cams to old-school engines like the Model A inline four-cylinder. Braun has worked inn off-shore, unlimited powerboat racing. The duo have significantly placed four-cylinder Subaru heads atop a Model A block. They’ve also secured Porsche 928 cylinder heads atop big block Chevrolets.

One of the most significant ideas Aardema and Braun have come up with involves a V12 supercharged engine meant for boat racing, which brings both of them back to their roots (Braun has crew-chiefed H1 Unlimited boats). The 1200-cubic-inch,60-degree V-12 engine first appeared at the 2015 Performance Racing Industry show where, placed in a walking area between the large show floors, it stopped people in its tracks.

At that time the huge sea monster was in its development stages as the duo looked for an investment partner (in addition to Kevin Aylesworth, whose boat Braun crew-chiefed) to bring it to fruition, and as of early 2017 claimed to have orders for two of the behemoths. Having designed and constructed both the three-valve aluminum heads and block in-house, Aardema and braun relied on traditional suppliers to bring the project to completion.

While the engine has run on the dyno, it’s unclear whether it’s been used in boat racing to the close of 2019. And the V1200 isn’t the end of the run for Aardema & Braun, who are building a new lakester in anticipation of the late summer 2020 meet at Bonneville. They’re intending to bring home more medals as they stretch the limits of three-valve design (two intakes, one large exhaust valve) as far as they can possibly take it.