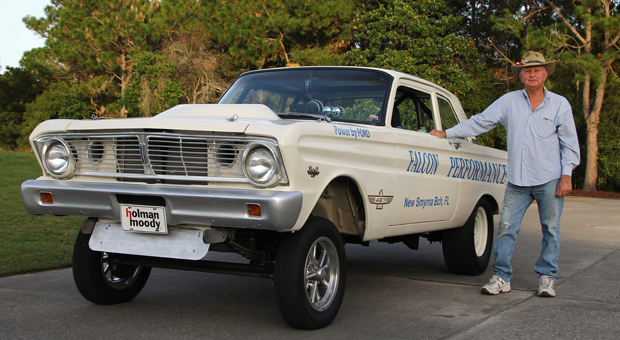 When Charley Carnes bought this 1965 Ford Falcon 2 door sedan in 1991, it was a sad scrappy heap of an animal. It had sat there, abandoned by its owner, neglected in every way, but Charley saw within it a car he’d always dreamed about. A love of the 1960s, particularly those early gassers and A/FX cars had fueled his interests for as long as he could remember, and while others might have seen an impossible task, Charley saw a project. He called it his junkyard dog. He took it in, fed it dollars and watched it grow.

The Falcon 2 was originally equipped with a 6 cylinder engine and “three on the tree.” When Charlie rescued it for $300, it had miscellaneous NOS parts thrown on as well. Charley also acquired a wrecked, abandoned ‘85 Mercury Capri at the same time, but its carbureted 5.0 engine and a 5 speed transmission were a perfect match for the Falcon. The resurrection was on. But this was only the first engine to go into the beast.

From several 289s to a 390 with dual quads, the engines cycled in and out of the Falcon as Charley searched for the perfect power train for his gasser. As an engine builder, Charley had an idea of what he wanted, and finally decided that if could create what he wanted. Working with Crane Cams in Daytona Beach, FL he designed the current configuration of a small block Ford 347 stroker motor with a custom one off cam design. Most of the other work, however, was done by Charley in a 20×20 garage out behind his home with hand tools and the sheer determination to make it all.

A fiberglass 427 high-rise hood, doors, deck-lid, bumpers and fenders complete the desired retro build. The 8-point cage was installed back in ’91, but the rear Deist ‘chute was installed recently. The side glass is plexi, and finishing touches include the race buckets with ACI race harness, Autometer gauges. The Rocket 10-spoke 15×4” fronts and 15×7” rear wheels with vintage, mounted Firestone cheater slicks (8.20×15) round out the go-fast goodies!

Not yet satisfied with his gasser look, Charley installed a straight axle from Speedway Motors, and a Detroit locker with 3:70 gears and Thunderbolt lift bars completed the drive-train. Charley doesn’t drag race the now drag-pedigreed pooch, he just wanted “the look” and feel to it as he cruises to all the local cars shows and cruise-ins around the area. Still, this Junk-Yard Dog makes a pass now and then with the “laundry” hanging out at speed just to prove that the legs (and the engine) are for more than just show.