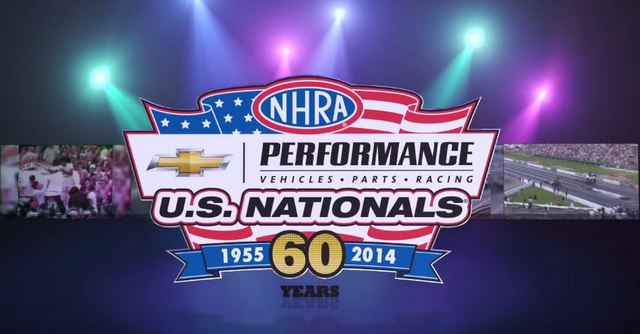 The 60th annual Chevrolet Performance U.S. Nationals is the NHRA’s biggest event in prestige and the one race that can a make a team’s season successful. It goes by the nickname of ‘The Big Go’, but every drag racer calls it the one to win.

This year, Lucas Oil Raceway in Indianapolis will remember its greatest moments with tributes to the famous names that have driven into the history books—Garlits, Prudhomme, McEwen, Muldowney, Kalitta, Glidden, Schumacher, and Bernstein—to celebrate its fabled history.

There will be six separate celebrations with NHRA host, Bob Frey at the 60th Main Event tent located behind the East Grandstand in the Pro pits. The first 300 attendees at each event will receive a hard card denoting the event. These limited-edition keepsakes will be a very hot commodity at the event, and fans will want to make sure they attend each of the presentations to collect all six.

On Friday, August 29 at 5:30 p.m. EDT, the 1970 race will be revisited with Jim Nicoll and seven-time Indy winner, Don Prudhomme reminiscing about their death defying Top Fuel final. Just as Prudhomme was winning his third U.S. Nationals, suddenly, Nicoll’s front end with engine attached went flashing by ahead of ‘The Snake’ just past the finish line. In ABC’s Wide World of Sports, the emotional Prudhomme was distraught saying ‘I’m going to quit’ before finding out that Nicoll was bruised, but all right.

On Saturday, four of NHRA’s greatest will talk about their historic wins. Kenny Bernstein will be up first at 1:45 p.m. to accept the accolades of being the first Funny Car driver in 1983 to win the ‘double’ in his famed Budweiser King, which included the Big Bud Shootout on Sunday followed by his triumphant victory on Monday at the U.S. Nationals defeating Tom Anderson in the finals. The three-time Indy champ was the No.1 qualifier and was one of the innovators of coming up with the special Funny Car event along with NHRA Director of Marketing, Brian Tracy and Budweiser’s Motorsport Manager, Ron Winter.

At 2:15 p.m., the first lady of drag racing, Shirley Muldowney takes the stage to celebrate her famous 1982 U.S. Nationals win over Connie Kalitta. Among ardent drag racing fans, it goes down as probably NHRA’s most famous race and led to the movie Heart Like a Wheel. The three-time Top Fuel world champion was in a torrid battle against her former crew chief, Kalitta and became the first woman to ever win the U.S. Nationals. She beat Jeb Allen, pre-race favorite Mark Oswald (now Antron Brown co-crew chief), and Billy Williams before her famed match-up in the finals, which she called “the race of my life.”

The 5:30 p.m. slot is filled with a great pair of Funny Car favorites, Don ‘the Snake’ Prudhomme and Tom ‘the Mongoose’ McEwen reliving their famous race in the 1978 Nationals. McEwen entered Indy with a heavy heart after losing his son, Jamie just days before the major race to leukemia. The then eight race NHRA schedule found Prudhomme 15-2 going into Indy’s eliminations with wins at the Winternationals, Springnationals, and the Grandnationals and looked like a shoe-in to win his seventh Indy and was well way on his way to collect his fourth and final Funny Car championship.

Sunday brings with it, a collection of the all-time best at Indianapolis at 10:45 a.m. ‘Big Daddy’ Don Garlits, Tony Schumacher, and Bob Glidden will convene as a panel of U.S. Nationals experts with a total number of wins at Indy totaling 25. Top Fuel’s most prolific driver, Schumacher has nine wins, Garlits with eight and Pro Stock’s Bob Glidden with eight to lead all other competitors.

Garlits returns to the 60th Main Event tent at 2:30 p.m. to talk about his 1967 Indy win. At the time, Garlits hadn’t reached the coveted six-second zone and vowed during that season not to shave until that goal was reached. After borrowing a set of tires from friend and that year’s Nationals finalist, James Warren, tore off the starting line in the finals and recorded a time of 6.77 seconds to take the win. The crowd amassed around the starting line to see if Garlits would do what he said. At the starting line, Garlits was handed a shaver and shaving cream and proceeded to remove his beard. It goes down as one of Indy’s most famous events of all time.

He will reenact the storied happening again in 2014 by driving up the track in his famous Swamp Rat XI before the finals and be shaved this time by a professional barber.

Race day Monday morning will start with the Sealmaster Track Walk with dignitaries, Don Prudhomme, Tom McEwen, and the lovely former Miss Hurst Shifter, Linda Vaughn, leading the way for fans to join them. The track walk gives fans an excellent opportunity to check out the historic dragstrip.

Other major events surrounding the build up to the Chevrolet Performance U.S. Nationals will be the popular Don Schumacher Racing’s open house on Friday from 10 a.m. to 3 p.m. to benefit Riley Hospital for Children at Indiana University Health and Camp Riley. It will feature a giant car and bike show, entertainment and appearances by each of DSR’s seven professional drivers along with drag racing pioneer and team owner Don Schumacher at DSR headquarters at 1681 E. Northfield Drive in Brownsburg, Indiana.

The conclusion to the Lucas Oil Nationals will be held for Funny Car in the third round of qualifying starting at 4:15 p.m. on Saturday with a major battle for the Wally with 141-time winner, John Force against defending Brainerd winner, Ron Capps. For Pro Stock on Sunday, it will be the fourth and fifth rounds of qualifying starting at 11 a.m. and 2:30 p.m. with Jason Line against Dan River and Jeg Coughlin racing Vincent Nobile.