The NHRA makes a bittersweet trip to Atlanta Dragway this weekend for its third race of the 2021 Camping World Drag Racing Series season – and the track’s 40th and final annual Lucas Oil Southern Nationals on the soon-to-be-closed dragstrip. It’s a two-day race meeting for the Camping World set, with two qualifying sessions on Saturday and eliminations on Sunday, while the Lucas Oil Sportsman competitors get to race all three days.

With only 15 Top Fuel cars on the entry list, it might appear that the class isn’t healthy. It’s expensive to travel from one end of the country to the other, which is what Mike Salinas is doing this week. He raced in Gainesville but wasn’t at Las Vegas, which would seem to be an easy haul from his central California coast location, but Salinas and his Pro Stock Motorcycle race-winner daughter Jianna are on the entry list. 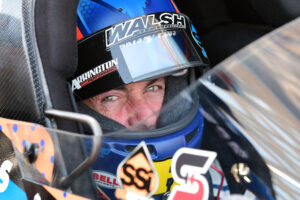 Other interesting Top Fuel tidbits are the affiliation of Clay Millican’s Stringer Performance rail and Walmart, which will conduct vaccination clinics all three days of the race meeting and the new look this weekend for Leah Pruett’s dragster, which has Whisps Cheese Crisps sponsorship to create an orange and white wrap for her Don Schumacher Racing dragster. Fortunate guests to the latter’s DSR hospitality area will have the opportunity to sample Whisps products.

Of course it’s all about competition. In Top Fuel, the primary competitor is three-time consecutive champ Steve Torrence, who’s had “good luck charm” Dom Lagana by his side for both previous races. Torrence won the most recent Atlanta race, held in the spring of 2019; the track was unable to conduct any NHRA professional competition last year. 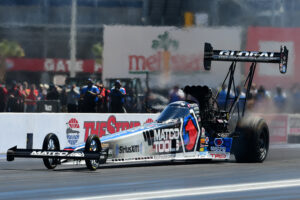 Although he hasn’t clasped a Wally trophy yet this season, Doug Kalitta has three previous wins at this track and is aiming for fourth, which would tie him with Larry Dixon and Antron Brown, the latter a fierce competitor who has Brian Corradi ready to hoist him to the top of the standings. Kalitta beat teammate J.R. Todd in T/F at this track by inches in 2016. At this point, Brown’s in third place behind Torrence and Kalitta Motorsports’ Shawn Langdon. Notably, for this race, Gatornationals winner Josh Hart will be back on track, joined by fellow part-timers Joe Morrison, Arthur Allen and Buddy Hull. 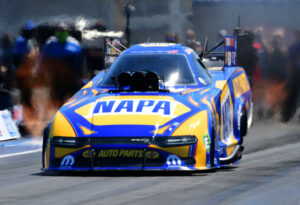 Atlanta Dragway has special meaning for Funny Car racer Ron Capps, who won the 2019 race on this dragstrip, his third at the Commerce, GA track. “I guarantee if you ask any driver going into this last race, they all want to take that last trophy,” Capps said. Of the circuit he notrd, “It’s always had a unique feel and, as our sport has grown, the track has kept that old-school feel to it. There’s very few tracks on the circuit left like that, and it has a really cool, nostalgic feel to it.” 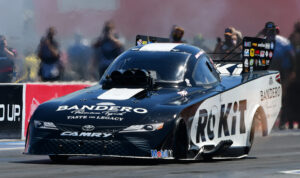 Just one point behind Force lies the Camry of Alexis DeJoria, now in her second year of a return to racing after sitting out two campaigns. With tuning duties relegated to Top Fuel/Funny Car champ Del Worsham (along with Nicky Boninfante), DeJoria is hoping to equal her mentor and crew chief with a win at the track where he captured his first win in a rookie season. Coming from a No. 3 qualifying ascent at Las Vegas, DeJoria is hoping momentum is on her side.

Pro Stock didn’t run in Atlanta in 2019 when the NHRA was attempting to space out the schedule for the door-slammer class. They do, however, return in 2021 to help close out the 40-year history of this dragstrip. Current points leader Greg Anderson, who has a 33 point gap to fellow four-time champion Erica Enders, could tie the legendary Warren Johnson with a fifth win at Atlanta this weekend. Enders is looking for her first Atlanta Wally winner’s trophy: “I’m really excited to have one last opportunity to hopefully get a win here,” she said.

Anderson, who won the season opener and has notched No. 1 qualifiers in both races held this season, counts his “flawless” Chevy Camaro for his ascension to the top of the points tally. He still understands there are “a lot of cars that can win. We’re absolutely one of them and it’s exciting going to the races these days; I’m enjoying it more than ever. I can’t wait to get after it this weekend and see what we can do at the last NHRA Southern Nationals.” 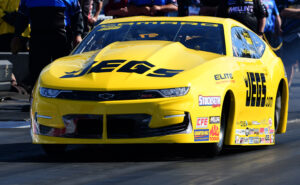 Pro Stock Motorcycle fans are ready to see six-time champ Andrew Hines and three-time titleholder Eddie Krawiec ride their new mounts this weekend. They’ve got a Vance & Hines chassis powered by the brand new VH160VT V-Twin and sporting new Buell bodywork. The duo, after announcing the new engine a few weeks ago, sat out the first two races of the year as they mentored teammate Angelle Sampey’s first laps on her new four-valve Suzuki-powered V&H chassis. 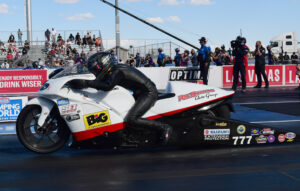 This race should mark the return of Joey Gladstone on another four-valve, injected Suzuki, along with Marc Ingwerson (EBR), David Barron (EBR) and Chris Bostick, first to race the four-valve Suzuki combination. All three of these riders had incidents the week before Las Vegas and had to sit out that race. In addition to these guys, we’ll enjoy the return of Jianna Salinas (Suzuki), Pablo Gonzalez (EBR), John Hall’s EBR, Jimmy Underdahl and Charles Poskey on Suzuki motorcycles.

It looks like the weather will be remarkable for its lack of rain at Atlanta Dragway this weekend. Temps are expected to be in the high 70s to low 80s in Commerce and there’s a 22% chance of showers for Sunday, which is modest. Will the mood of racers and fans on-site at Atlanta Dragway be muted by the loss of this racetrack after 40 years of competition that’s invigorated competitors and attendees alike? The competition begins Saturday with qualifying at 12:125PM ET and 4:15. Final eliminations are set to begin at 11AM and, prior to that, 250 fans will have the chance go enjoy the southern Nationals Final Event SealMaster Track Walk.

2 Comments on 40th and Final NHRA Southern Nationals This Weekend