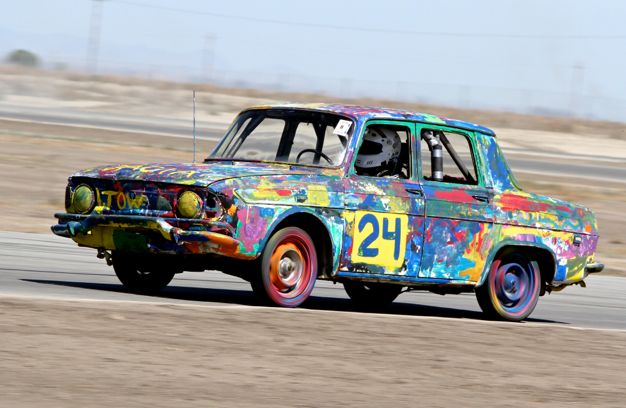 There are very few places where a “cool” 99 degree day exists, and Bakersfield, California is one of them. It was also the site of yet another 24 Hours of LeMons race at the Buttonwillow Raceway Park, hosting for the fifth year. Friday night inspection drew a 120-car list with a disappointingly high percentage of Mazda Miata’s, RX-7s and BMW 3 series, which may have led to a weekend of disappointingly low percentages of cars making it past the five hour mark.

However, some teams managed to resist the temptation of small Japanese sports cars, like former Buttonwillow champ Team Tinworm who pooled together the remains of their original 1959 Humber Super Snipe to create a surprisingly decent looking replacement.

Team Tinworm Humber wasn’t the only team with dramatic repair this weekend as the OMShenanigans were forced to swap out the cooked engine from their original BMW 735i for a replacement from a team member’s own BMW 735i street car. How convenient. Evidently two wrongs, racing a 7 series and donating another’s engine, do make a right and OMShenanigans took home the Heroic Fix trophy after a smoother rest of the weekend.

Another interesting story developing out of Friday’s inspection was the contrast between two corvettes. The first, a pink “Barbie Corvette” which was made by throwing a couple body panels on an old Honda Civic, and the second, a very weathered and very original Blue and Red C4 Corvette automatic with extra loose suspension. A G.I. Joe-Barbie argument ensued shortly afterwards. Eventually they did actually get to some racing, thus resulting in some losers, and most importantly, some winners! 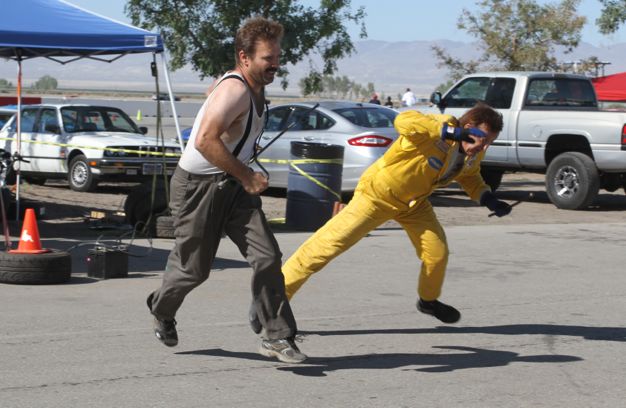 With great intelligence, comes great ideas. LeMons staffers often throw around this quote and seeing that they’re some of the brainiest and quick-witted individuals you will ever meet (not to mention physically stunning), Sundays start was nothing shy of spectacular. With the perfect combination of potential disaster and hilarity, the carefully thought-out “morning crank start” competition was born. In this race before the race we pitted two crank-startable cars mano-a-mano, bravely featuring Team Tinworm’s Humber Super Snipe and Michael “Spank” Spangler’s Renault 10/Dacia 1100. 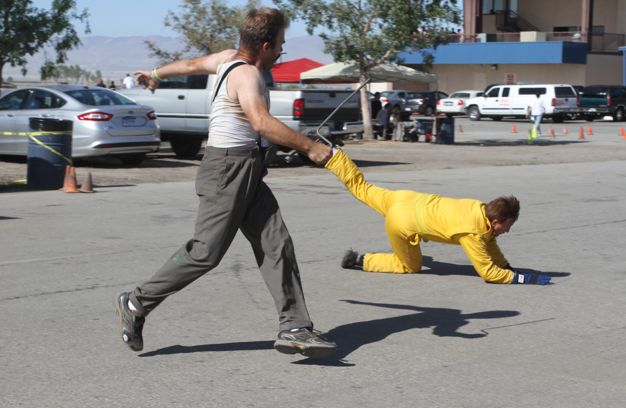 Not two feet into the contest and almost without hesitation Spank (being all that is man) sent Tinworm Captain Alan Frisbie pavement bound with a quick forearm blow to the side. Luckily for Frisbie his reaction time is that of a small fox, so he managed to narrowly avoid being impaled through the neck by the Humber Super Snipe hand crank. 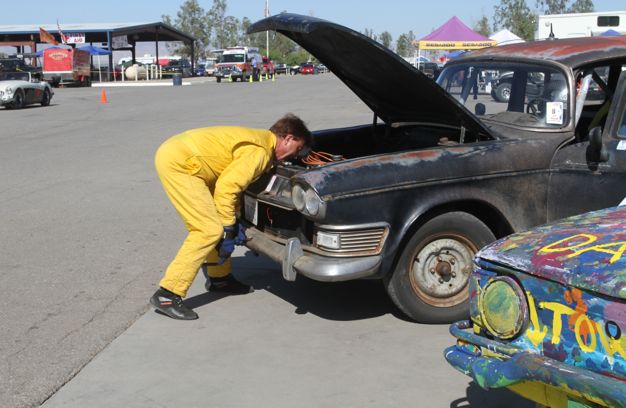 As always with life, days when you don’t get impaled are generally positive. 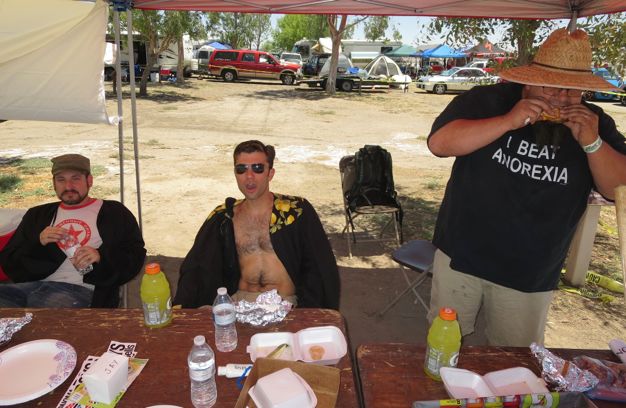 In the Judge-Phil-less Penalty box (His Honor Judge Phil had to return to the Bay Area due to family reasons) we saw a slew of replacement professionals. This crew of qualified deputies effortlessly took over, ruling with an iron fist. The council included such greats as Evil Genius Racing owner John Pagel, car bloggers Jason Torchinsky and Tim Odell, and anorexia survivor Shawn Rodgers. 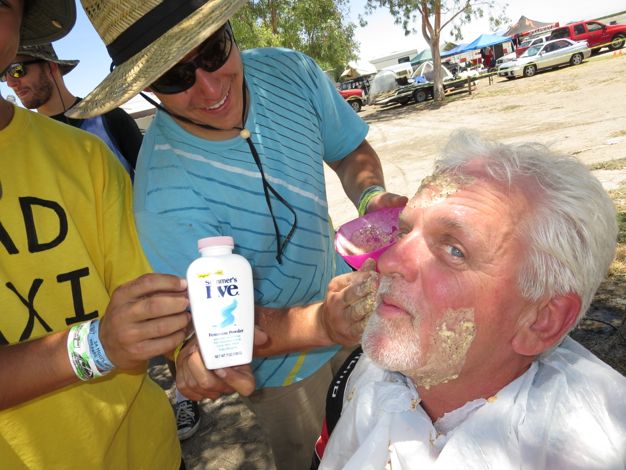 The judges began by dishing out a lavish punishment with a heavy hand. When the driver of the Mad Taxi RX7 began driving a tad too belligerently on the track, Torchinsky pulled him aside for a nice relaxing spa treatment to calm him down. 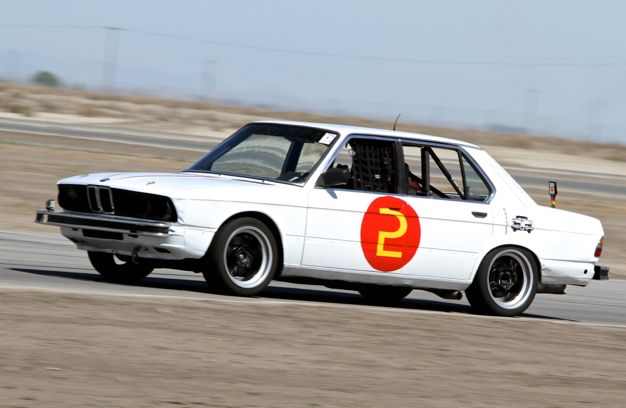 With the wave of the checkered flag we saw Cerveza Racing cruise to yet another Class A and overall win, the Super Troopers take a Class B victory, and the Pinewood Dirtbags Chevy Luv grab a come-from-behind-win in Class C. 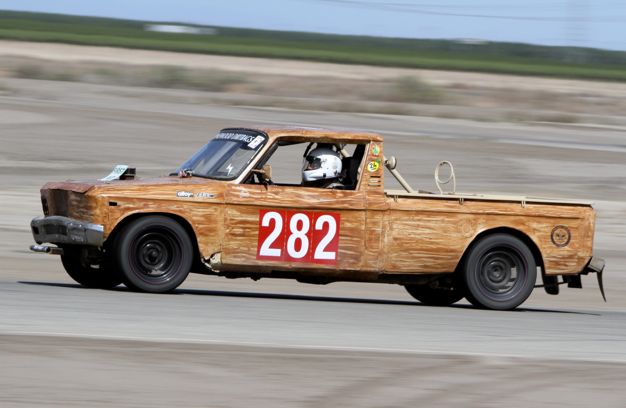 As far as come-from-behind wins go, this was on the less dazzling side of the spectrum for the Pinewood Dirtbags. They managed to overtake the K-Car and quite possibly one of the worst Porsche 914’s to ever touch its tires to a road track. The difficult part was attempting to quell the truck from bursting into flames (the identically equipped sister truck did indeed abruptly catch fire midway through the Saturday session). So that was a victory in itself. 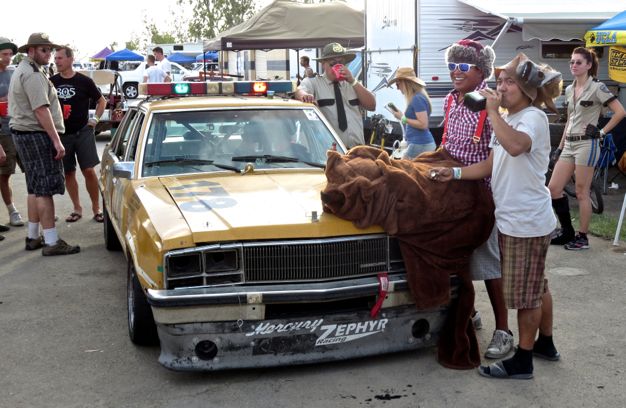 On Sunday the Super Troopers drove away with not one, but two trophies. In addition to their Class B triumph, they obtained a team first Organizers’ Choice award for their event-long commitment to their theme. 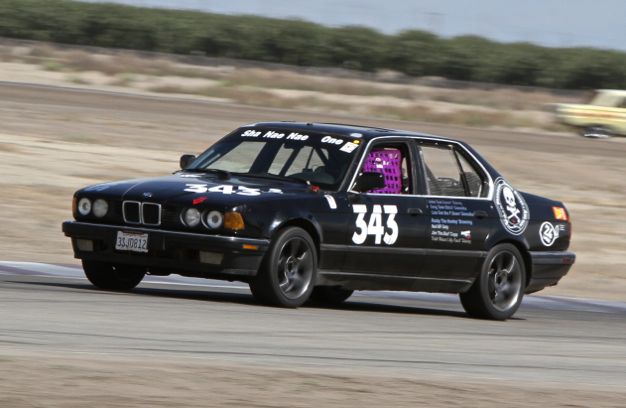 Team OMShenanigans BMW 7-Series provided them quite the struggle over the weekend. The problem: a blown oil cooler hose; the solution: putting their street car on a trailer and driving the race car a few hundred miles back home from the race. It was all worth it though. The strategy gave them with a lasting fix, and they took home the much-deserved Heroic Fix trophy. 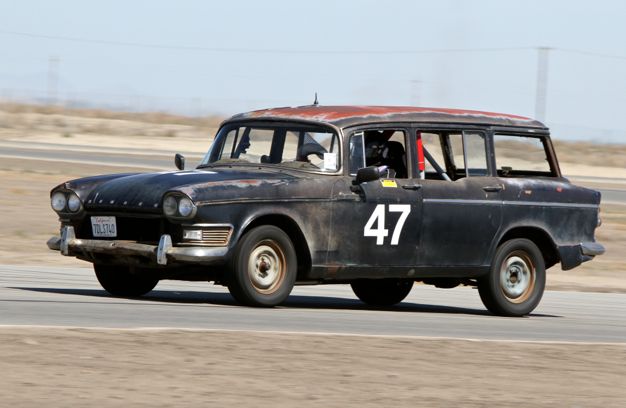 The final award, the Index of Effluency, was a battle ‘till the end. This clash included the two entries that previously competed in the dismal hand-crank start challenge: the Humber of Team Tinworm and Spank’s Idioti Curse o Masina Pentru Idioti, both struggling for the grand prize in all of LeMons,

Astonishingly the duo were able to finish right next to each another in the standings at P72 and P73, with the Humber taking the Renault by a mere two laps. 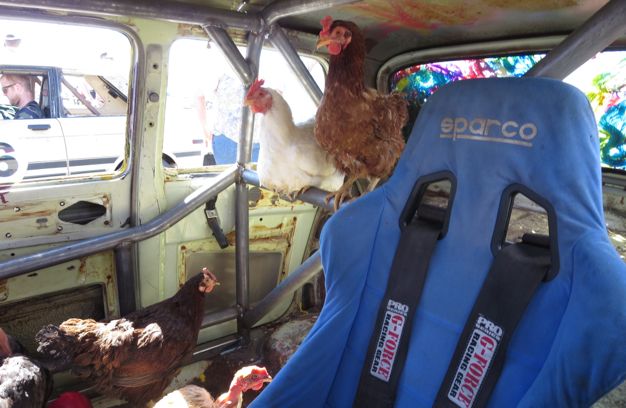 To place Spank over the edge for the Index of Effluency win they needed to think outside the box. Thus why not insert some farm animals into your theme? Genius! As Spank went home with the IoE, the judges tried to avoid sending home Humber captain Alan home with only a bruised thumb (and ego) to show for his wholehearted effort. The team was awarded Better Luck Next Time honors. 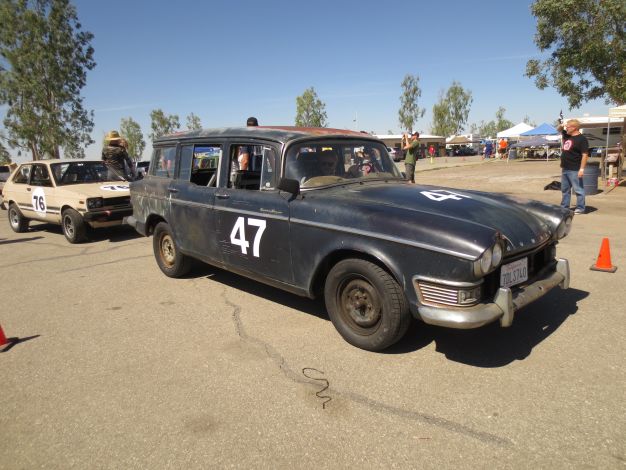 With the final results tallied, I’m sure some teams came away from this weekend more than perplexed. Losing to a team that passed through tech filled with chickens, and another team driving a car that looks like it should be behind a shed somewhere in Kentucky, can’t be good for your psyche. In the midst of all this racing these two cars managed to pick up mid pack results in a grueling hot weather endurance race. They also managed to beat out some cars that on paper would normally thrash this ridiculous duo, and in no particular order: Porsche 944, BMW E36, Mazda RX7, Audi A4, Acura Integra, Camaro, Mustang, and a BMW E30.

Ultimately we learned a few things during this race, one being the key to a Class win in LeMons is to either join Cerveza’s squad, or bring a BMW. And secondly, the answer to an IoE win is to bring some kind of farm animal. Do any of these three and some form of trophy is basically guaranteed.

2 Comments on 24 Hours of LeMons Heats Up Southern California