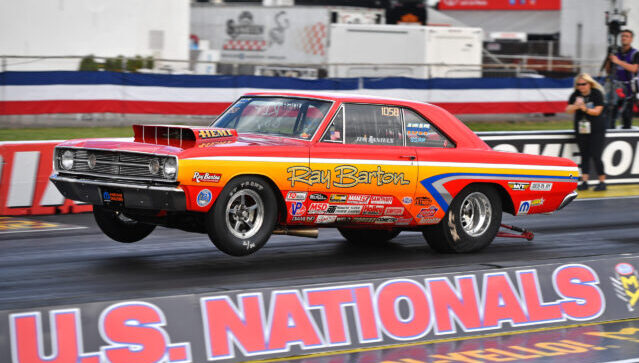 The 2020 edition of the upcoming Dodge HEMI® Challenge looks to be a memorable one for all the right reasons; a special guest of honor and some record-setting achievements are revving up National Hot Rod Association (NHRA) Sportsman class fans. More than 50 years after the iconic 1968 HEMI Dodge Darts and Plymouth Barracudas first appeared on the drag strip, loyal racers and fans will once again be able to see the legendary cars race head-to-head in the ever-popular Dodge HEMI Challenge at the 66th annual NHRA U.S. Nationals at Lucas Oil Raceway near Indianapolis, Indiana, on Labor Day weekend.

The popular Sportsman class event, dedicated to showcasing Super Stock/A-HEMI (SSAH) competitors powered by the iconic 426 HEMI engine, was first launched in 2001 at “The Big GO” in Indy with support from FCA brands Mopar and Dodge. The 20th edition of the annual Dodge HEMI Challenge returns with qualifying scheduled for Thursday, Sept. 3, and four rounds of eliminations competition to be contested on Friday, Sept. 4. The final shootout will take place Friday evening with the participants vying for the custom-built 42.6 lbs. Dodge HEMI Challenge trophy crafted with a 426 HEMI cylinder head, a $15,000 prize to the winner, $1,500 to the runner-up, and cash payouts for semifinal and quarterfinal finishers. All competitors will also receive the coveted Dodge HEMI Challenge participant decal and event hats.

Acclaimed Mopar Super Stock and Pro Stock racer Herb “Mr. 4 Speed” McCandless will be the guest of honor for the 2020 edition of the Dodge HEMI Challenge. Prior to the first round of eliminations, McCandless will lead the parade of participating Darts and Barracudas down Indy’s fabled return road aboard his own original 1968 Super Stock HEMI Dart in celebration of the classic muscle cars that contributed to Mopar and Dodge brands’ legendary reputation and success at the drag strip.

McCandless secured his place in drag-racing history by driving his Sox & Martin HEMI-powered Plymouth Duster to a win against a field of 90 entries vying for 32 spots in the first Pro Stock competition held in 1970 at the prestigious U.S. Nationals. As part of this year’s 50th-anniversary celebration of the NHRA Pro Stock category, an exact replica of McCandless’ 1970 Pro Stock HEMI Duster will be on display at the Mopar Road Show in the manufacturer’s midway throughout the race weekend.

A strong field of “package” Mopar vehicles are expected to compete in the specialty event while showing off beautiful and vibrant paint schemes and wheelstands. Originally commissioned by Chrysler in 1968, a limited number of Super Stock HEMI Dodge Darts and Plymouth Barracudas were built solely to compete on the drag strip, just as the modern-day Dodge Challenger Mopar Drag Pak is now. The Dodge HEMI Challenge is a tribute to those original muscle cars, now too valuable to race, and provides an opportunity to showcase today’s Super Stock versions as throwback clones of those historic vehicles.

Among this year’s expected front-runners is defending winner, 24-year-old Jimmy Daniels, who has not lost a single round since first taking the wheel of his father Jim Daniels Sr.’s 1968 Dodge Dart in 2016. The younger Daniels comes into this year’s event looking to extend two unprecedented win streaks; an incredible 18-0 round win record and an unprecedented four consecutive Dodge HEMI Challenge title victories.

Fans who can’t make it to the 2020 Denso Spark Plugs NHRA U.S. Nationals at Lucas Oil Raceway to watch the Dodge HEMI Challenge in person can catch all the action online via NHRA.TV and its subscription-based, video-ondemand coverage of live racing action throughout the weekend. The final elimination round of the Dodge HEMI Challenge, as well as highlights from the parade of participating Darts and ‘Cudas, will air on FS1 during the qualifying broadcast on Saturday, September 5 at 2:00 p.m. EDT with a repeat broadcast on Sunday morning at 11 a.m. on FS1. Fans can also look for Dodge HEMI Challenge highlights during NHRA coverage on the FOX national broadcast network on Sunday, September 6 from 1-4 p.m. EDT. DodgeGarage: Digital Hub for Drag Racing News Fans can follow all the NHRA’s action this season at DodgeGarage, the one-stop portal for Dodge//SRT and Mopar drag-racing news, available downloads, and merchandise. For more
information, visit www.dodgegarage.com.