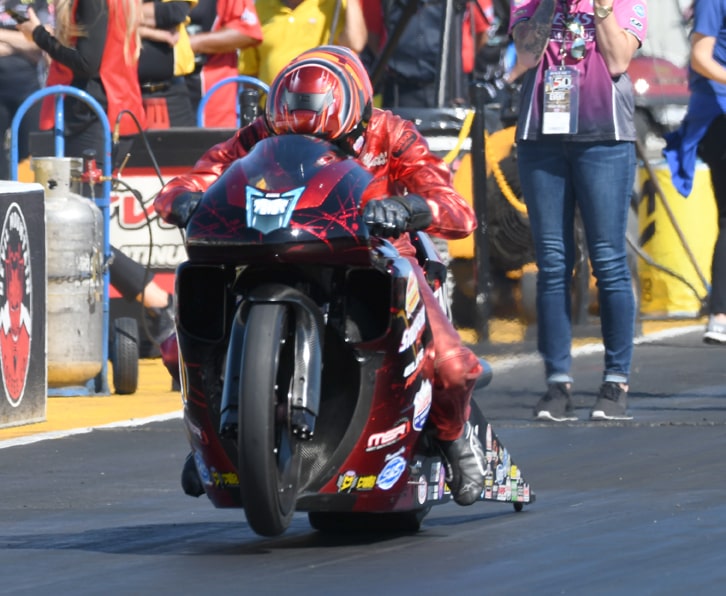 The 2019 NHRA Mello Mello drag racing season has, to date, been a magical one for five-time Pro Stock Motorcycle (PSM) champion Andrew Hines. The champ has been on a tear since the season began, winning from the start at the 50th annual Amalie Motor Oil Gatornationals – and now, with nine of 16 events completed, Hines owns seven of nine points-paying victories and has the Wally trophies to show for it.

Hines doubled-up last weekend by winning the Mickey Thompson Pro Bike Battle against seven exceptional competitors – including his Vance & Hines teammates Angelle Sampey and Eddie Krawiec – on Saturday and then running the tables on Sunday, defeating Kelly Clontz, Scotty Pollacheck and Jerry Savoie en route to a final round match-up against reigning titleholder Matt Smith. In a Harley-Davidson FXDR battle against Smith’s EBR, Hines was the victor with a run of 6.790 seconds at 198.00mph. Smith raced to the quarter-mile lights at 6.822/197.36.

The seven wins added to Hines’ grand total of 55 victories in the Pro Stock Motorcycle class and give him bragging rights until the class reconvenes at the 65th Chevrolet Performance U.S.Nationals at Indianapolis on Labor Day weekend. He swept both Western Swing races in his class, winning at Denver in the Harley-Davidson FXDR’s debut; Pro Stock Motorcycle never races the third contest in NHRA’s Western Swing, held this weekend at Pacific Raceways outside Seattle.

Hines works hard at his craft, both on the racetrack and at Vance & Hines’ manufacturing and design shop in Brownsburg, Ind. He has been the architect of many engine modifications to the H-D power mill, along with his brother Matt and with Krawiec, and he has worked at his skills on the starting line, always trying to find the right path to victory. It was with blatant horsepower that Hines eclipsed Smith last weekend, as he was later off the tree (.037 to Smith’s .025 RT), yet led from the 60-foot increment to the finish line. 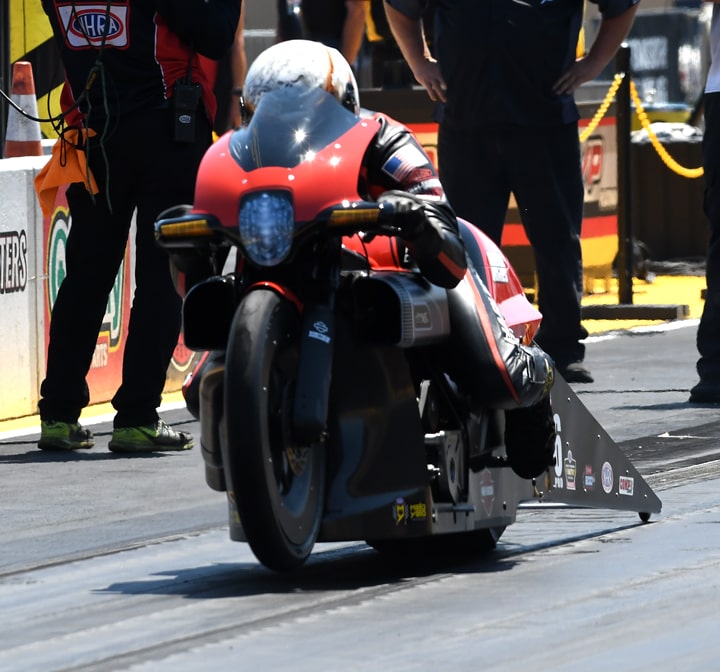 “It’s absolutely mind-boggling what we’ve been able to achieve this year,” Hines reflected after winning for third time at Sonoma Raceway. “The confidence with my motorcycle and my team, and the level of performance and professionalism the guys bring to the starting line every single time – it’s unsurpassed right now. I can sit on that starting line with confidence and it’s just unreal. I feel I’m probably riding the best in my career and I just want it that much more.”

With only a single contest at Indy to define the 10 riders who will be competing in NHRA’s six-race Countdown to the Championship, four riders have already punched their tickets: Hines, Krawiec, Smith and Hector Arana Jr. Hines has a massive 197-point lead over his teammate and, at this point, a 588-point advantage on 10th-place Jerry Savoie. Would it be right to concede to Hines and the Screaming’ Eagle Vance & Hines Harley-Davidson team now, even without the additional seven races scheduled for this season? Don’t bet against it!