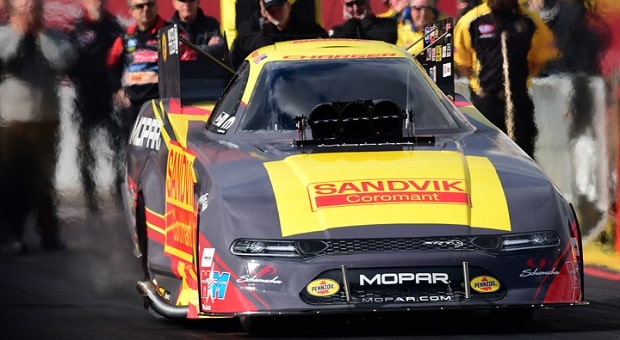 Last weekend’s 35th annual Magic Dry Organic Absorbent NHRA Arizona Nationals were difficult for racers, officials and fans of the sport, as weather dictated the cadence of the race meeting and challenged crew chiefs to prep cars on the fly with the changing and challenging conditions.

After Friday’s two qualifying sessions were scotched following a protracted single session that saw most Funny Car entries and some Top Fuel racers cross the water box to take on the 1,000-foot Wild Horse Pass Motorsports Park dragstrip, crews had only two Saturday sessions to prepare for Sunday’s eliminations, which were held under better, race-worthy conditions.

On Friday, only Matt Hagan made a full-throttle throw-down on the racetrack, crew chief Dickie Venables coming up with a defying 3.94-second pass that amazed everyone brave enough to stick around between showers and very cold temperatures. Brittany Force had the quickest Top Fuel run at 4.976-sec. It was really that difficult to get traction with the conditions NHRA racers had been dealt.

NHRA made the smart decision to call it a day before Pro Stock even came to the staging lanes; many Top Fuel entries – TF ran after FC – didn’t even bother to present themselves for a qualifying run, realizing the conditions at the time and those anticipated by darkening skies and cooling temps didn’t warrant wasting nitro or parts.

Saturday’s cool temperatures didn’t truly hinder the racers, but quite a few cars had difficulties getting to the finish beams in the final, second session of the day, as the conditions just weren’t at their best for quick times and speeds. Still, Billy Torrence (3.667 sec/328.46 mph) led the 16 Top Fuel entries that saw better than half the field in the “3s.” Terry Totten’s slowest qualifying speed was 6.821 sec. 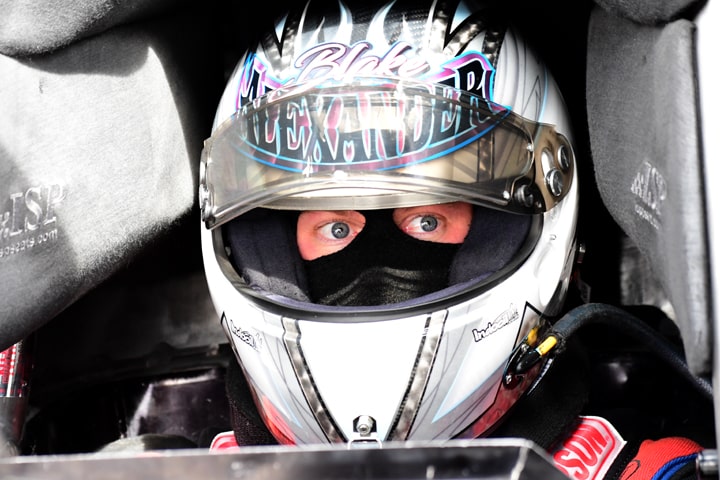 In Funny Car, Pomona winner Robert Hight put it all together to best Hagan in the final qualifying tally, clocking 3.867/329.91 after his tuner Jimmy Prock found the right ingredients for a fast time, even as Hight pulled his chutes late after working hard to keep his Auto Club Chevrolet Camaro SS off the wall. Blake Alexander, whose 2017 Ford Mustang didn’t even burn out on Friday, managed an acceptable 4.035-sec pass in his first outing as team owner. Only Gary Densham failed to make the 16-car field.

If you looked at Saturday’s time sheets, you’d feel certain that both Hight and Bo Butner, victorious at Pomona, would be headed to the Winners Circle again on Sunday. KB Racing’s Butner put in his best run in the 1PM, early session at 6.522/211.46 over Alex Laughlin, both driving Chevy Camaro race cars. Laughlin, on the Elite Motorsports team looked strong in both of his Saturday runs and was optimistic for Sunday’s eliminations, occurring on team owner Richard Freeman’s birthday. 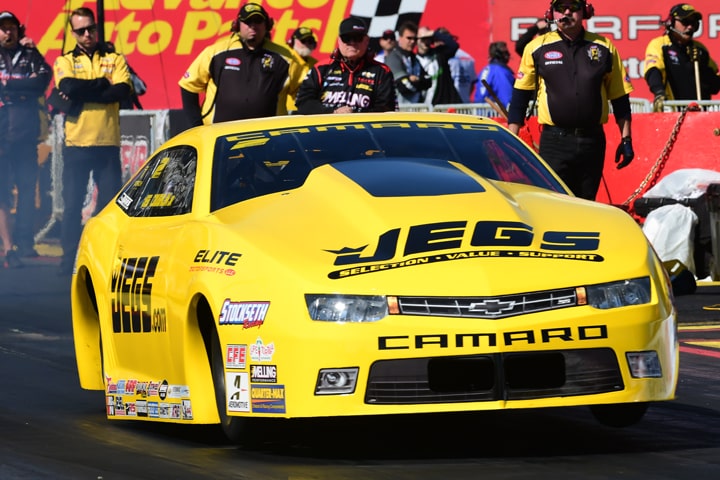 It wasn’t to be for Laughlin, but Jeg Coughlin Jr came through for his team owner to take the Wally winner’s trophy from seventh in the 16-car field. Coughlin easily beat Greg Anderson, took out Laughlin, who fouled in the second round, defeated another teammate, two-time champ Erica Enders and went on to win the race on a second foul against Matt Hartford as the day drew to a close. This was Coughlin’s 62nd overall victory in NHRA competition and fourth at this track. Incredibly, this win occurred in Coughlin’s 1,000th round of Pro Stock racing.

Matt Hagan was the first Don Schumacher Racing (DSR) driver to race the new Dodge Hellcat SRT in Denver last year; after winning in Phoenix on Sunday – the Virginia cattle farmer’s 30th career victory and the 150th for DSR – it seemed right that he should hoist the first winner’s trophy for the new body style. Teammate Tommy Johnson Jr., celebrating his 30th year in pro NHRA racing, wasn’t so lucky as he exploded his body in the first round of eliminations but still went ahead when Jim Campbell crossed the centerline and disqualified his machine.

Johnson finished his day of racing in the second round, when reigning Funny Car champ, Kalitta Motorsports’ J.R. Todd handily won in his DHL Toyota Camry. John Force, still looking for win No. 150, had his 100th round matchup against 2016 champ Ron Capps in the first round of competition, came away with the victory but still fell to teammate Hight in the second round. Bob Tasca III’s new Ford Mustang suffered a chassis crack in his Friday qualifying attempt so the team brought a brand new car he intended to test on Monday; the new Ford Mustang took Tasca all the way to the semifinals before he was defeated by Hagan. 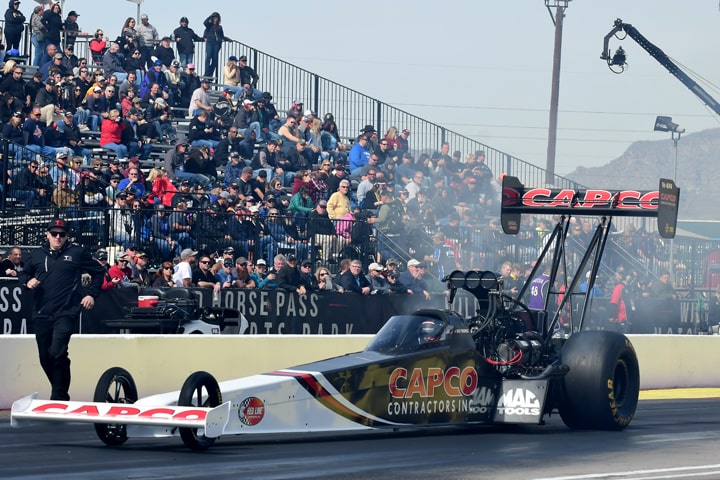 Billy Torrence, the 60-year-old father of reigning Top Fuel champ Steve, parlayed his No. 1 qualifying result into his second career title on Sunday at Phoenix after watching his son lose in the first round to Antron Brown. Jordan Vandergriff, making his dragster debut at this track, was smooth and straight in his first and second rounds of competition, racing for his uncle Bob, before falling to eventual winner Torrence. Austin Prock again made a quarterfinal run before being defeated by Brown. 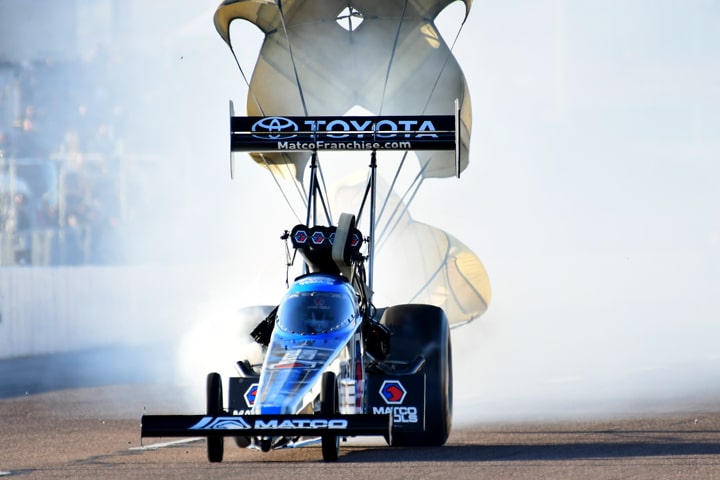 After an event-filled Pomona contest in which her Mopar dragster from DSR had one mechanical problem after another, Leah Pritchett finally had a good racing weekend, before stumbling out of the block and falling to Torrence in the race’s final round. Looking for her third victory in the last four seasons at this track, where she secured her first TF win in 2016, Pritchett had three solid Sunday passes in the 3.7-sec range before falling to Torrence in the finals.

Some teams stayed at Wild Horse Pass for testing on Monday. During that session, DSR’s 2012 Funny Car champ Jack Beckman had a body explode on him in similar fashion to the incident that befell Johnson Jr on Sunday. Neither driver was injured.

The third race on the docket is a big one – the 50th annual Amalie Motor Oil Gatornationals in Gainesville, Fla, taking place March 14-17. At that race Pro Stock Motorcycle and Pro Mod rejoin the tour to begin their seasons, as does NHRA’s Factory Stock Showdown category. In addition, a total of 20 NHRA Legends will be on hand while eight of those former competitors – Don Garlits, Don Prudhomme, Shirley Muldowney, Ed McCulloch, Warren Johnson, Joe Amato, Kenny Bernstein and Terry Vance – will take part in an “Unfinished Businesses” exhibition race that helps mark this contest as a truly colossal event.