It’s not often the first round of eliminations in NHRA’s 24-race Mello Yello season gets rained out, but the 2019 season starter, the Lucas Oil NHRA Winternationals on the Auto Club Raceway at Pomona, suffered one squall after another on Sunday, forcing eliminations to Monday.

The change kept many fans away – work must have beckoned – but a good group of drag racing aficionados partially filled the larger, left-lane stands to see who would be first to the stripes. Monday’s on-track action didn’t disappoint, with sunny skies, cool temperatures and dense air providing low elapsed times and fast speeds.

When Top Fuel’s first round of eliminations re-started shortly after 10AM Monday morning, Mike Salinas set the bar with his win over Clay Millican and a 3.682-second pass down the 1,000-foot dragstrip at 333.74 mph. A bye, due to a 14-car field, allowed reigning champion Steve Torrence a solo blast in the second round at 3.678/331.36, while Salinas took on rookie sensation Austin Prock.

Although Prock had a fairytale weekend leading up to his second round of eliminations, he was stopped at the finish line by Salinas. The duo had a remarkable battle – it seemed like Monday’s elims were the most competitive in years throughout all classes – but Prock came up short, despite a personal best of 3.699/334.15, and a .064-sec reaction time. Salinas clocked in at 3.685/334.10 for his second round win, despite leaving .006 slower than his adversary.

It looked like Torrence was ready to take his seventh victory in a row – the Texan swept 2018’s Countdown to the Championship six-race playoffs – but he was stopped in the tire-smoking finals by the “holeshot” quicker reaction time of “Air Doug” Kalitta, which prompted a mosh pit for the second consecutive year. Kalitta, who claimed a single victory in 2018 at the season starter, is hoping the addition of Rob Flynn, who upped the Michigan driver’s game in the 2018 Countdown, might gain him that evasive title Kalitta’s been racing for all these years.

“I could see the finish line,” Kalitta said of his tire-smoking run. “We just held onto it down there. It was either let it blow or get the win. Our guys have been very meticulous during the off-season. Everyone has been very positive and have been working together really well. Everyone wants to win and we were really hungry for this one.” 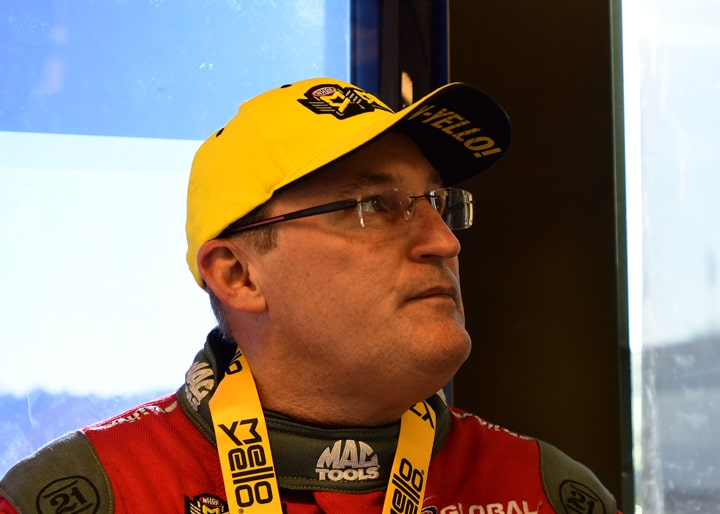 After leading testing at Phoenix the week before the Winternationals, Robert Hight knew he had a good car. With the same team surrounding the two-time Funny Car champion and precious little in off-season turmoil at his area of John Force Racing, Hight looked relaxed when racing began at Pomona. He led qualifying from the second session through the fourth, earning No. 1 at his second pass of 3.871 sec at 329.67 mph. 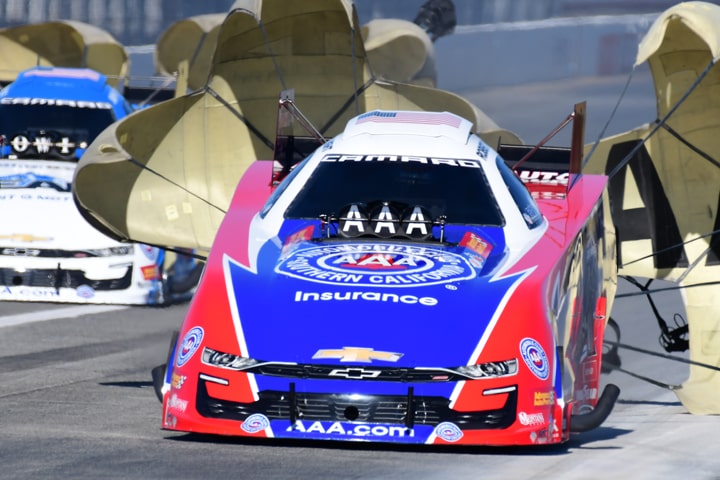 Surviving a pedalfest against Terry Haddock, Hight then beat Bob Tasca III in a straight-up fight, took out team owner John Force in the third round, again in a well-fought fight and found himself battling No. 2 qualifier Jack Beckman in the finals. The duo raced hard from lights to beams with Hight the victor, his fourth Winternationals victory at 3.881/329.75. The difference at the end of the track? It was a mere .001-second! 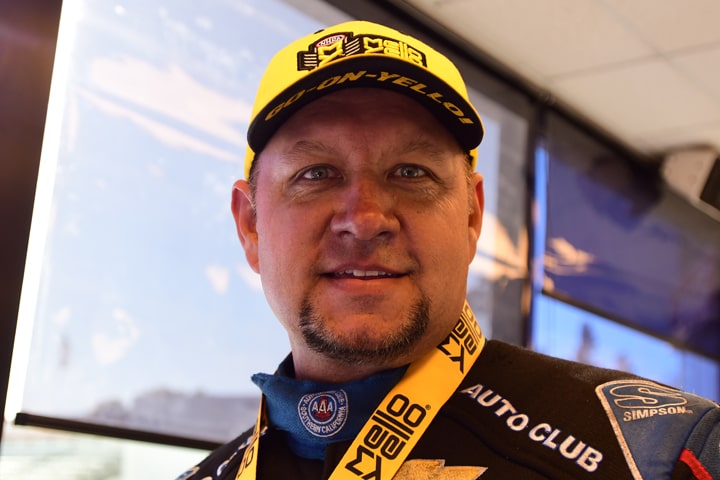 Since there were no major changes in the Funny Car class between last year and this (like the 40-degree header decree for 2018), “You look at the Funny Car class and I think it’s tougher this year than it was last and that’s saying something,” Hight noted. “Everybody is stacked up. It’s not going to be easy. You’re going to have to have consistency with your car,” he said of his Auto Club Chevrolet Camaro SS.

“To come out here and be No. 1 qualifier and win the race, it’s quite an accomplishment. Jimmy (Prock, crew chief) is really happy with the way this thing runs. How easy it is on parts. I’ve never seen him more confident.” Prock, Austin’s father, is well known for his to-the-moon tuning capabilities. Prock’s motto is “setting the world on fire since 1991,” and his results are either wins or blow-ups, it seems. 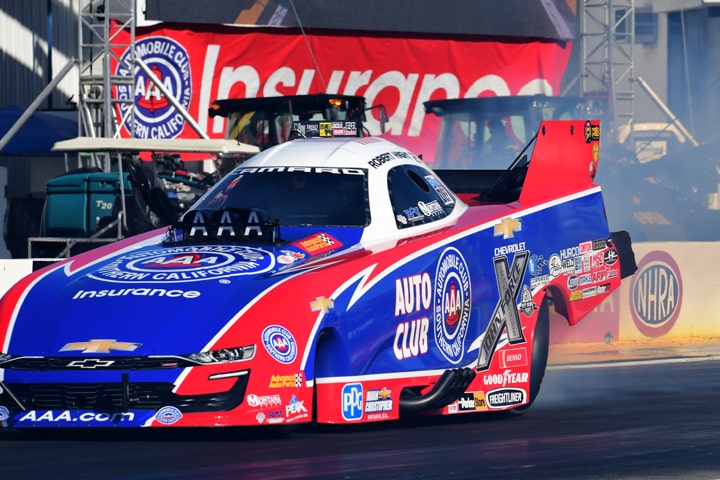 Runner-up Beckman came into final qualifying in 11th and came out in second place with a 3.900-sec pass on Saturday afternoon. In his 57th final-round appearance driving Don Schumacher Racing’s Infinite Hero Dodge Charger SRT Hellcat Funny Car, Beckman was pretty much devastated to lose by .001-sec on a holeshot.

He remained optimistic once the day was done. “We didn’t test and we were struggling until the last qualifying run,” he said. “We made wholesale changes – five of our six clutch discs are different than when we left here in November, and for the guys to zero in on it that quick without the benefit of pre-season testing, take this car to the final found and run it as quick as anybody, I can’t wait for Phoenix!”

Bo Butner, who was planning to step away from Pro Stock racing after last season – “I retired for a week,” he joked – came back strong and earned a second consecutive victory in this season starter. He had to race teammate Jason Line, who didn’t have the goods in the finals, allowing the 2017 Pro Stock champ to work his way through eliminations from his P3 position. 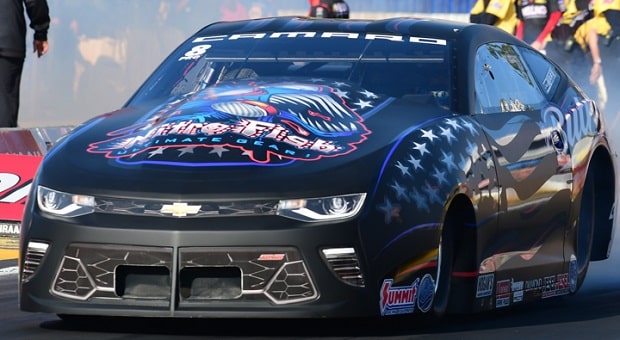 After class-returning No. 1 qualifier Rodger Brogdon fouled out of the first round, Butner put his head down and his right foot heavy on the Chevy Camaro’s loud pedal, easily defeating Alan Prusiensky’s Dodge, Chris McGaha’s Chevy and Brogdon’s teammate, two-time Pro Stock champ Erica Enders, on a holeshot.

Even with lane choice, Butner took the less-preferred right side of the Auto Club Raceway at Pomona dragstrip and had another easy run against mechanically-hampered Line, recording his winning 6.522-sec drive down the quarter-mile at 211.59-mph. It was the 150th victory for KB Racing and Butner’s eighth career Pro Stock victory.

“Pro Stock is the most competitive and that’s one reason I decided to come back,” he said. 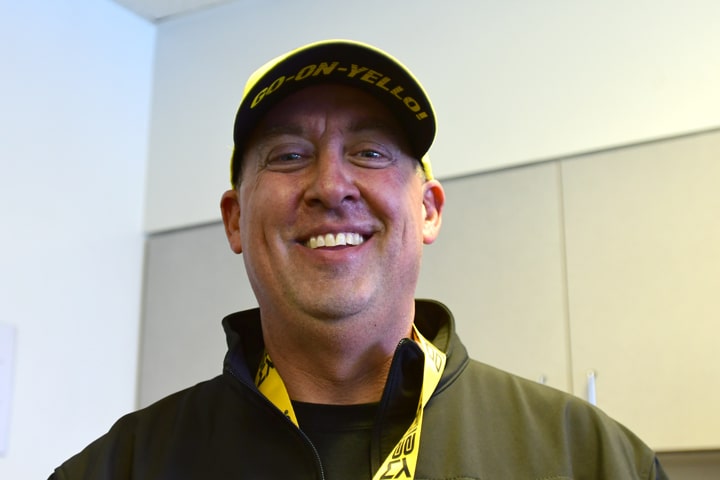 Admitting it was his mother Dottie who told him he needed to continue in the class when the schedule was reduced from 24 to 18 races, Butner said, “I’m glad I did come back because this is great. I lost my brother Jim Butner two weeks ago,” he said. “I contemplated if I should even be out west (for the race) but I talked with his family and decided to come. This win is for them,” and all the Jim Butner Auto Group team members.

The Lucas Oil NHRA Winternationals might have taken four days to complete, but the on-track action was exhilarating for those that braved the weather and delays to watch Monday’s eliminations. Most teams are ensconced in the area until after the weekend before traveling to Wild Horse Pass Motorsports Park outside Phoenix for the second race of the 2019 season.