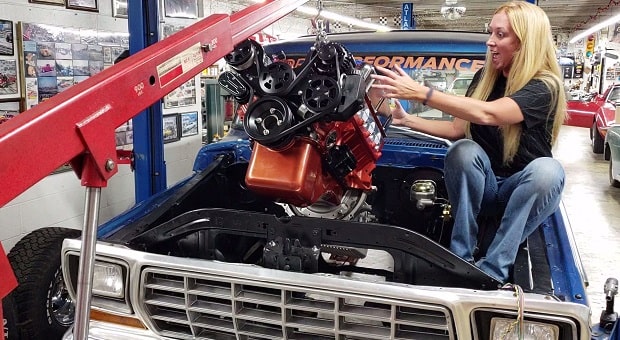 Courtney Barber caught the Ford-loving public’s eye a few years ago when she competed in the Bullrun and then overhauled a 1965 Mustang as a rally car, documenting the process on her site, Team Mustang Girls, and on social media. Since then, Courtney has become a Ford correspondent and freelance auto journalist as well as continuing to race the ’65 in rallies, driving it cross country (most recently to Alaska) and using it as her daily driver.  Recently, she was looking for a new challenge, and fell hard for the Mustang’s big brother – the Bronco. As she headed out to Las Vegas for the SEMA show, Courtney to some time to talk with RacingJunk about the Bronco, the build, and the big plans she has for it (hint — she’s actually on the road right now!)

RJ: You’re known for Team Mustang Girls. While the Bronco is certainly still an iconic Ford, it’s a universe away from the classic pony car. So what inspired you to make the Bronco your next project car? (Full disclosure: I’m a HUGE Bronco fan. It’s on my bucket list to own and rebuild one some day, so I feel pretty swoony getting to talk about your project).

CB: Haha, I had to find you on Facebook now that I know you love Broncos! 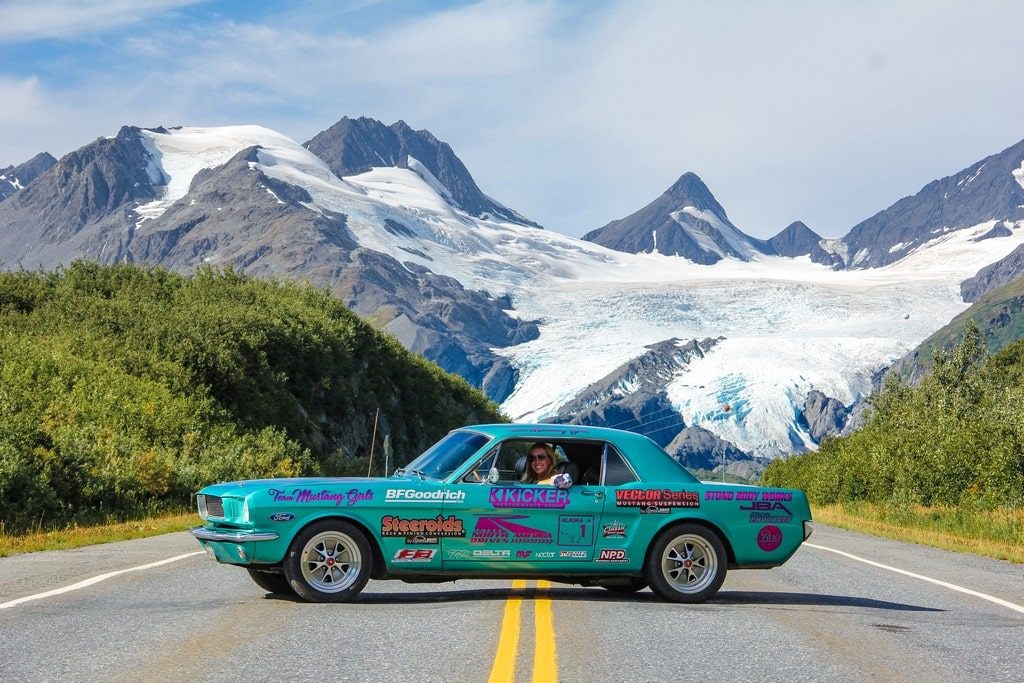 The trip to Alaska really sparked my Bronco purchase. After driving my 1965 Mustang on the Denali Highway – a stretch of 100 miles of gravel road – and almost breaking my car in half, I knew I needed something big and beefy to be able to go to places less traveled. Before that I was actually looking at a ’56 Ranch wagon as my next project, because I wanted something I could sleep in on the road. The 1978 Bronco was the first year of full size and still had the square boxy look that I love, so it was the perfect fit. 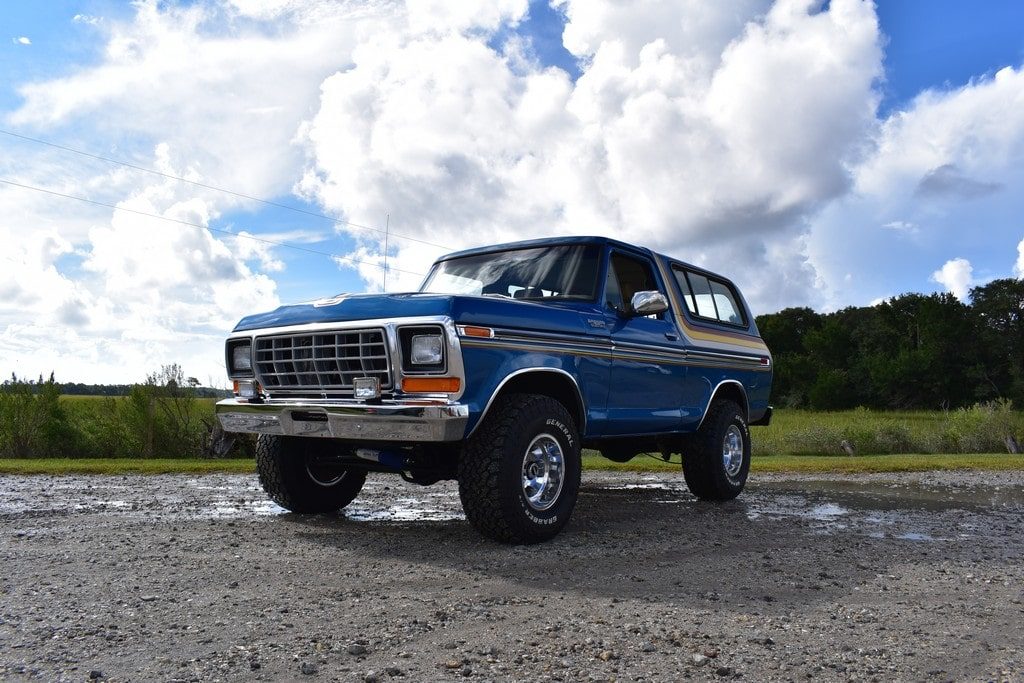 RJ:How did you choose this particular Bronco? And what was the first thing you decided to tackle when you got your hands on it? 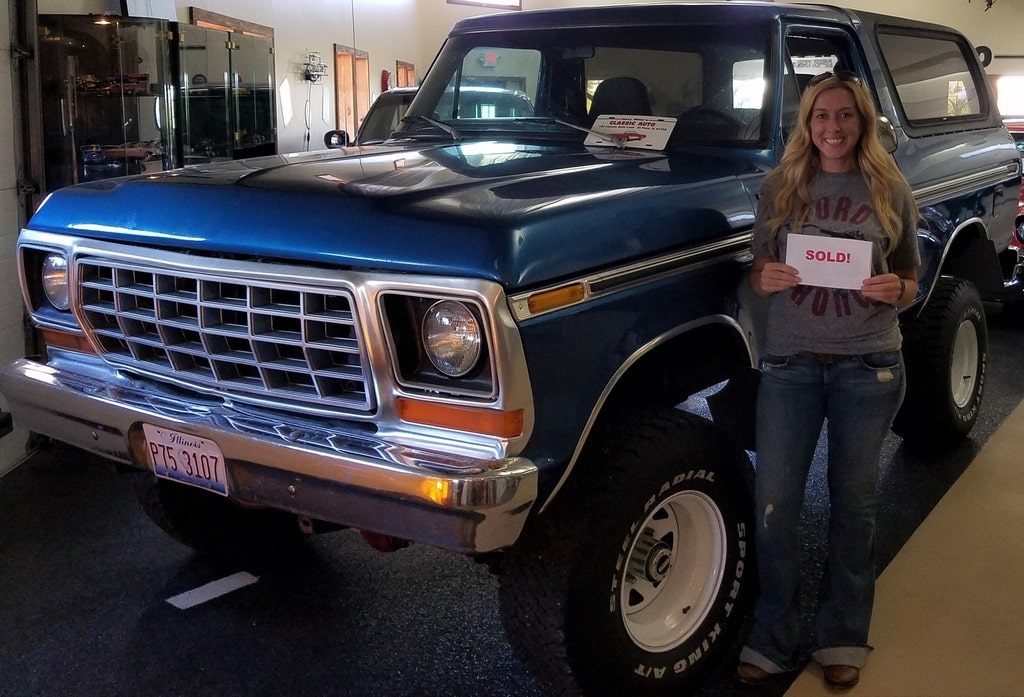 CB: I actually had a one way plane ticket to Washington state to purchase another Bronco weeks before I got mine. Luckily I had some amazing friends who were able to check it out for me, and determined that the truck I was planning to drive back to South Carolina was a total scam and couldn’t make it 10 feet, let alone 2700 miles. I honestly think they saved me more than just money, because I was planning on taking an Uber to meet the seller who swore the Bronco was road worthy. 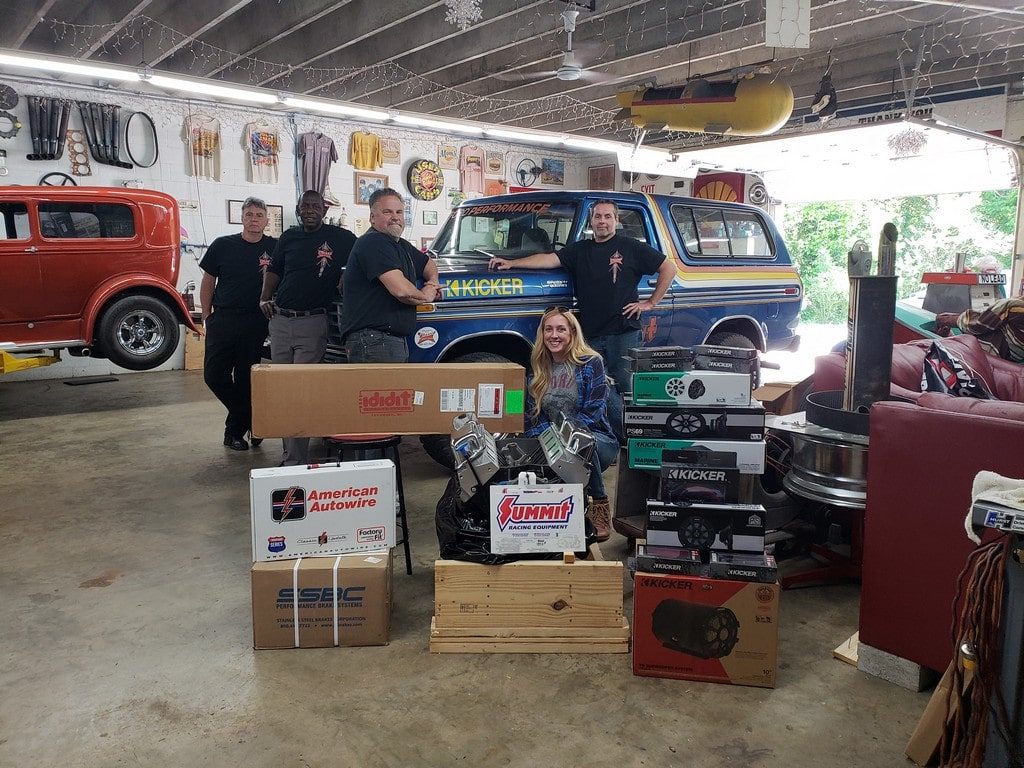 After that I was a lot more cautious and found my beautiful Bronco on consignment in El Paso, Illinois. While I did make it home to South Carolina, the 1200 miles home were terrifying. Every bushing on the truck was worn out, and I learned first hand how terrifying death wobble can be in a truck with a 7 inch lift! I have to admit I was more than a little scared to get back in it, and it sat in the driveway for a few weeks before I manned up and decided it was time to beat the fear.

And what better way than with paint! Yes, a normal person would probably focus on driveability, but that’s never something I’ve been called and I needed to find the excitement I had the day I saw it for the first time, before I actually drove it on the highway and saw my life flashing before my eyes on several occasions. I wanted to do my own version of the Freewheelin’ package Ford had offered on the ’79, based on a sunrise. Many people told me not to and to stick to the traditional two tone look, but I’m a stubborn ass and rarely take even smart advice. Russ Petty laid out the lines and as Manny the Paint Guy sprayed the paint, I began to wonder if I was destroying a decent paint job, until we pulled off the tape and it was better than I ever imagined! 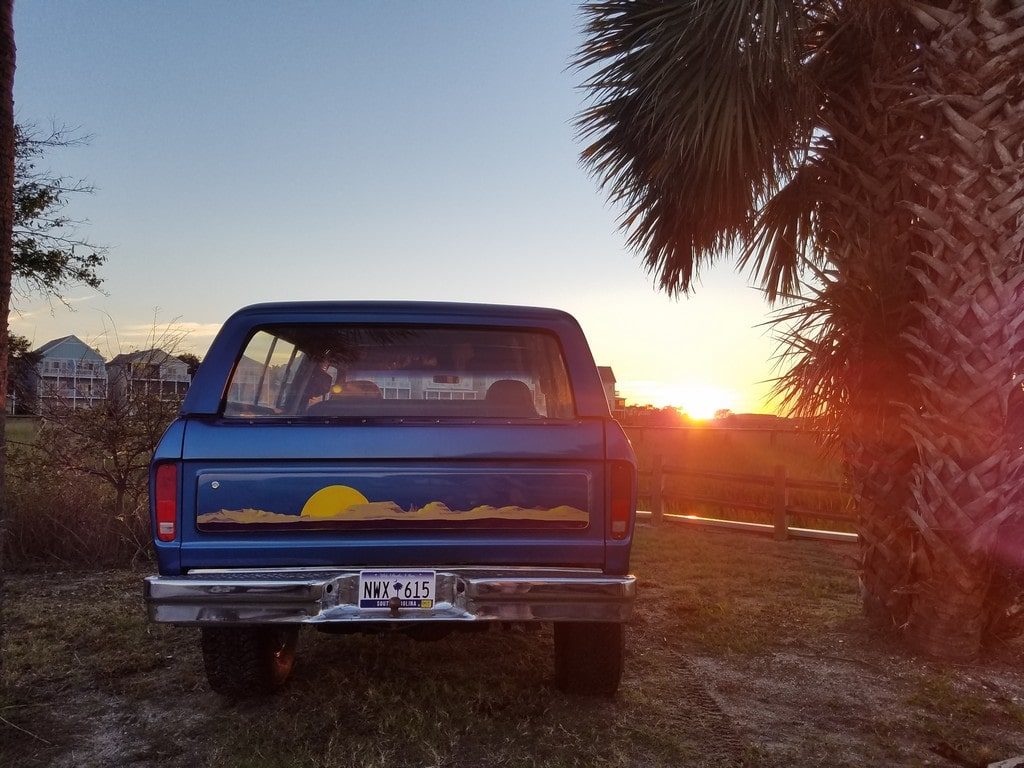 RJ:We know that the mechanics of this vehicle have proven a little more challenging than expected. What have been the biggest obstacles to getting it adventure-worthy? 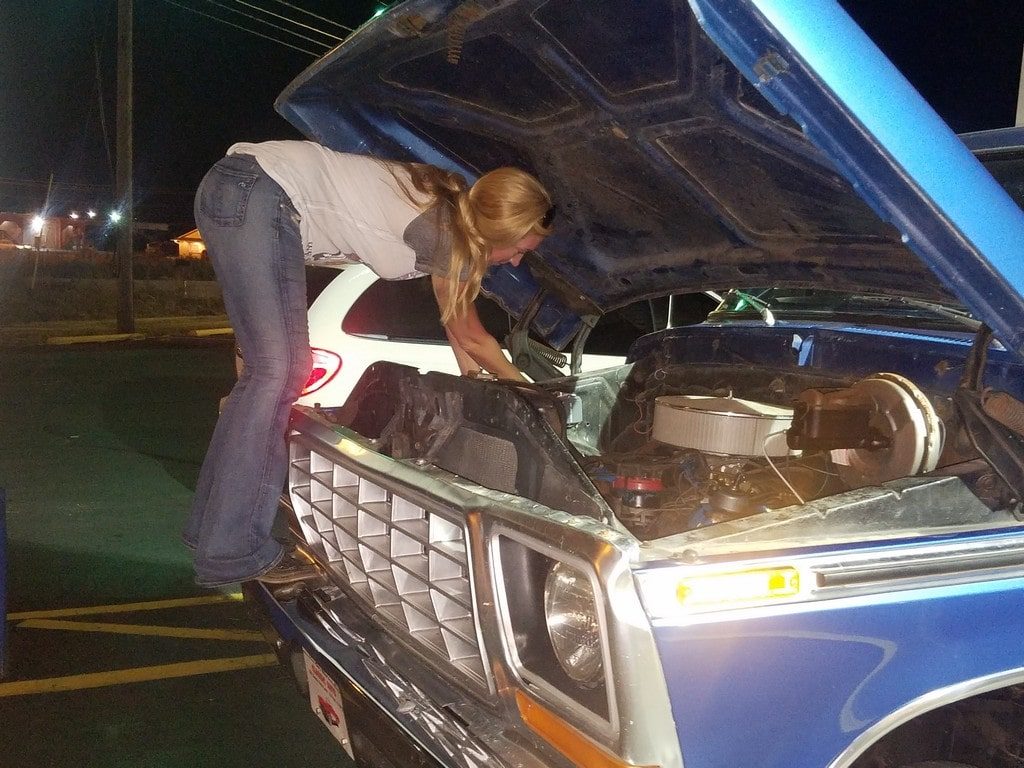 CB: Steering, steering, steering and steering, did I mention steering? Thanks to National Parts Depot, I was able to restore the truck back to stock height and replace every bushing on the truck. While it did help, there was still something that just wasn’t right. Everyone keep telling me I just had to get used to driving an old truck. A friend of mine actually had me drive his truck to see it was the same. Afterwards I had him drive mine and within seconds he said, “Something’s not right…” – the same thing I had been saying all along. But no one could see the problem. Everything was new and tight, but even the alignment shop couldn’t pinpoint what was causing the jerkiness and wandering of my Bronco.

Right around that time, Ford asked me to cover the Bronco Super Celebration in Townsend, Tennessee and I thought, what better place to find help for my problem? The 500 mile drive was better than my ride back from Illinois, which wasn’t tough to beat, but my knuckles where still white by the end of it. Everyone I asked told me James Duff Inc had the solution to my problems, and they were right. Michael Duff recognized right away that the issue was caster related, and their T-Rex Radius Arms with built in caster allowed me to keep the stock height and finally feel safe driving down the road.

RJ:What is the plan for its first big trek? 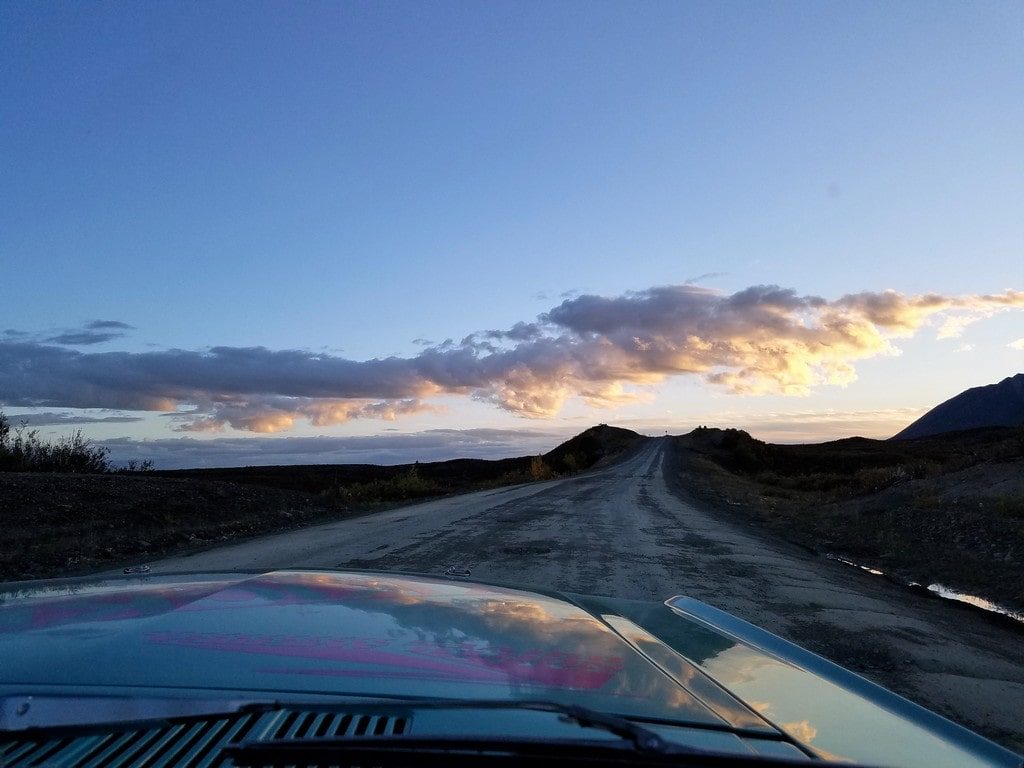 CB: I am determined to make it to Tuktoyaktuk, aka the Top of the World. They just finished the road allowing access to the city, which lies on the Arctic Ocean, and it has been calling to my soul ever since. The trip to Alaska was so incredible, I can’t wait to get back up there as well, so on the way back I plan to stop again. What’s a few more miles? 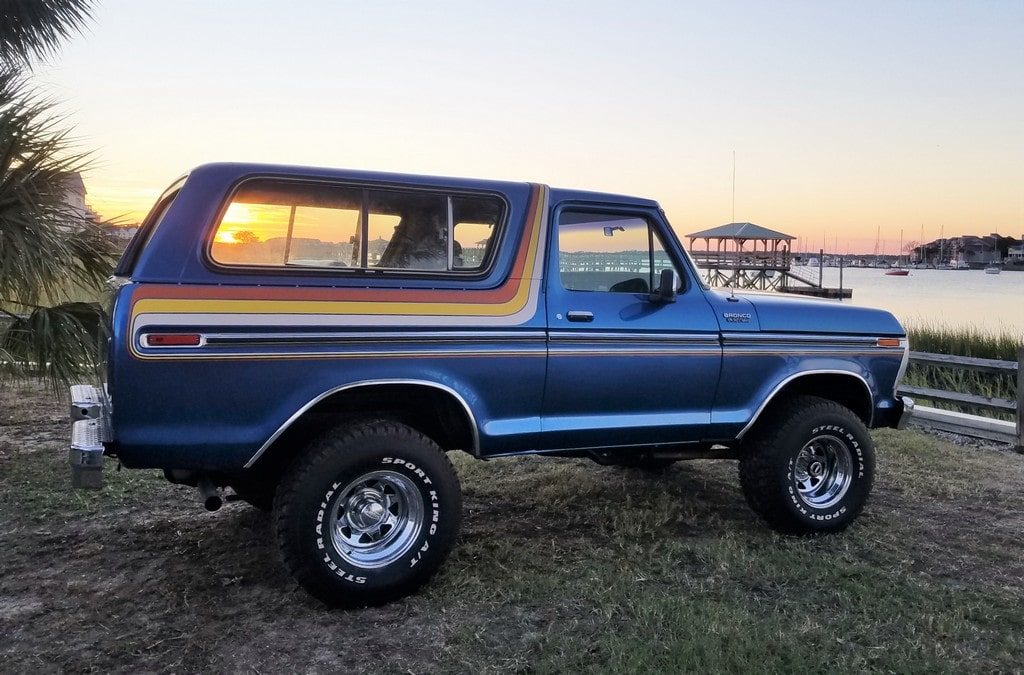 We were actually on our way last month when Hurricane Florence decided to reroute the plans. When it turned to my home in Charleston, SC I had to make the call to turn back. Now the plan is to go in the Spring. They actually have a festival in April to welcome back the warm weather, and I have been promised a dog sled ride by the mayor. As a huge fan of Iditarod, I am actually grateful that Florence made me wait! Everything happens for a reason. 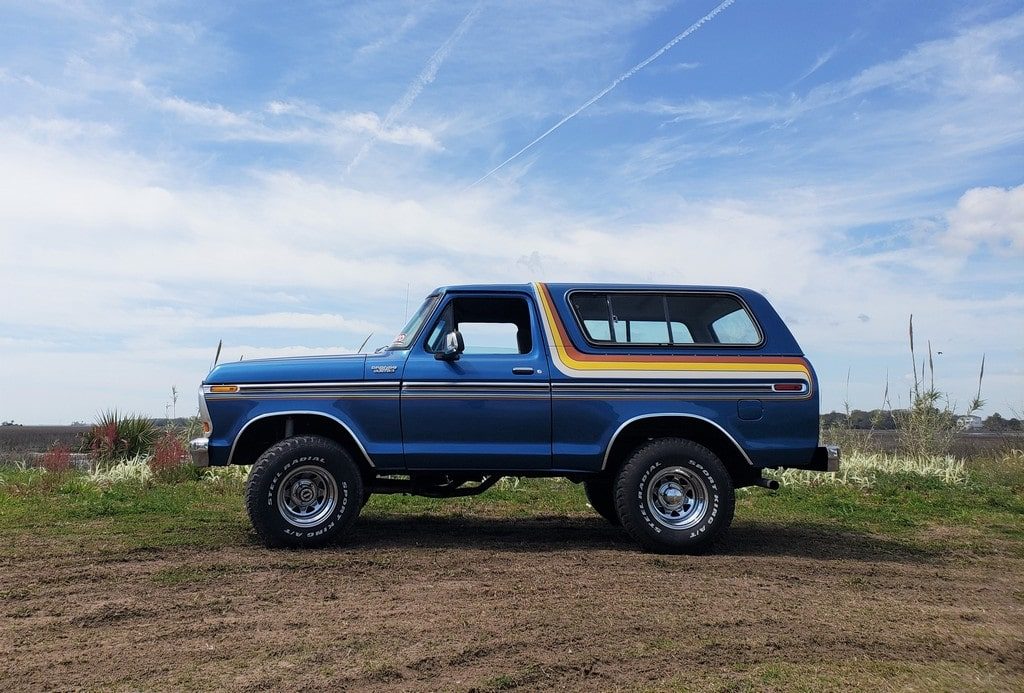 RJ: Team Mustang Girls became a true phenomenon of travel, mechanics and marketing. What do you hope to learn from this build, and what are you taking from the Mustang’s journey that you think you can apply to the mods and restoration (and then subsequent journey) with this Bronco? How does it feel different, as a project, than the Mustang given all you’ve learned and experienced from the success of that project? What will you do differently – from a promo and touring perspective – and what did you learn that you’ll be able to build on? 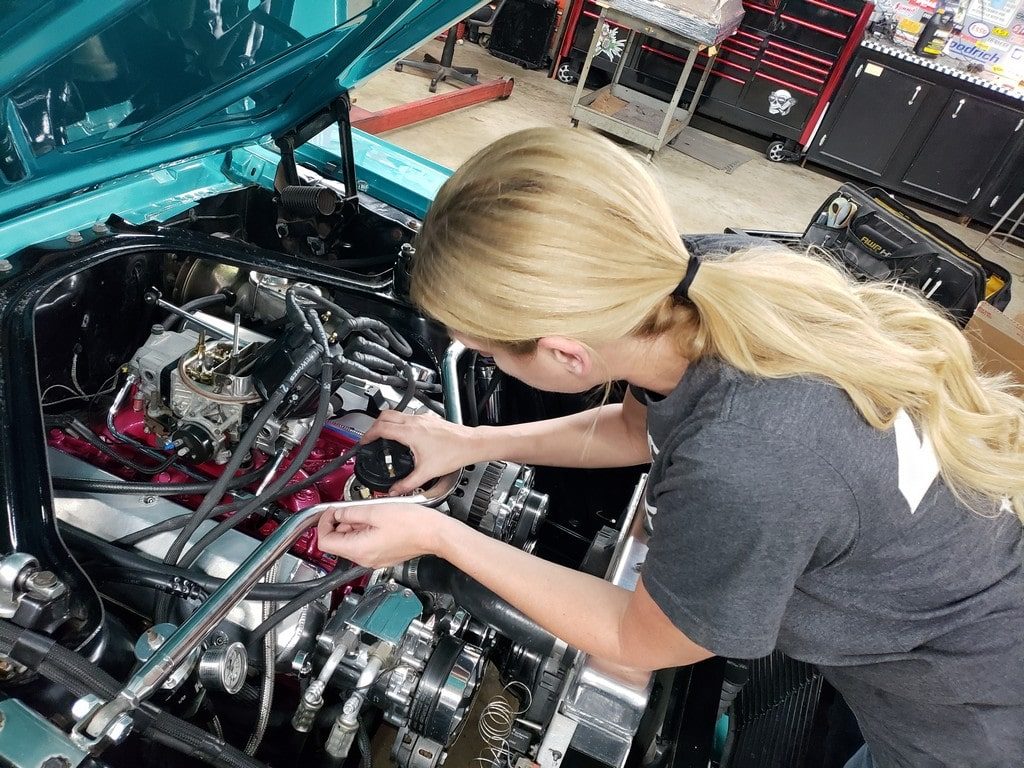 Well, I learned very quickly that I know nothing! I thought it would be easier after restoring the Mustang, but 4×4’s were a whole new world to me and I quickly found myself researching transfer cases, because the girl who loves to drive long distance unknowingly bought a rare all time 4 wheel drive Bronco. But the Mustang did teach me many things that did apply, and I stuck true to myself and kept the Bronco simple. If you stray too far from stock, finding parts on the road can be tough – a lesson I’ve learned many times with the Mustang. As far as the plans go – drive it! I’ve put over half a million miles on my Mustang and I would love to do the same with the Bronco. I’ve never met a dirt road I didn’t like, and now I actually have a vehicle that’s meant to be on them!