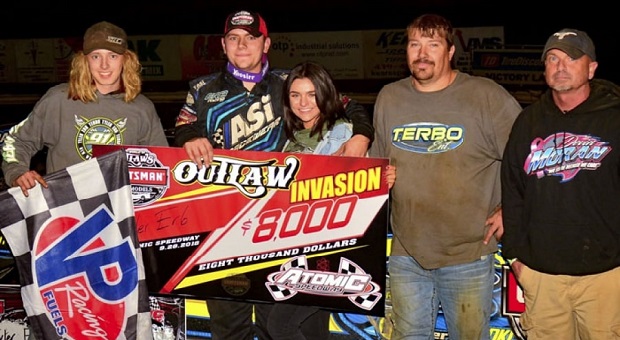 Although Mother Nature was the original winner of the World of Outlaws Craftsman® Late Model Series Outlaw Invasion at Atomic Speedway earlier this season, this rescheduled event gave one series young gun a chance to win big at the 65-year-old dirt track in Alma, Ohio.

After three years of always being the bridesmaid, 21-year-old Tyler Erb finally ended his frustration by earning two wins in a row at what is sure to be his favorite track on the schedule. Heavy rains that soaked the track in the days before the event, combined with the sub-60 evening temperatures and high humidity, made for a very rough racing surface. In fact, this is one of the roughest track surfaces that the Outlaw Series stars have seen yet this season.

Beginning Friday night on a track surface that included potholes, ruts and other obstacles that damaged the rides of drivers like Jason Jameson, Steve Casebolt and even the Rocket Brandon Sheppard, the driver that they call Terbo Tyler was super smooth in the feature through each corner, using all three lanes to make passes on his way up to the top spot. Erb said he actually looked to those who were faster than him early on for ideas on which lane was the fastest.

“I picked up the most speed in three and four” said Erb. “I could just run in between the holes almost and get a better drive off turn four than most people could. I think that is where I made the most ground up. I never would have thought I would have won after starting Friday night’s feature race in 17th, but my hard working, never give up team made this possible.

Following his first win on Friday, Erb returned to the track that made his dream come true just one night before to race his way into the first driver sweep at Atomic Speedway. After yet another start outside the top-10, Erb began to make his move towards the top around Lap 20 after racing past top drivers Mike Marlar, Chris Madden and then-leader Brandon Sheppard. After making a pass for the lead on lap 23 and holding it across the stripe before Sheppard dove into turn one and snatched it right back, the yellow flag came out just a few laps later, which settled Erb alongside Marlar. After giving Marlar the bottom lane for the restart, Erb realized that he made a bad decision. Despite this as well as Sheppard’s ability to battle back on the inside, the newest World of Outlaws Craftsman Late Model Series young gun Erb managed to find his own rocket boosters, which gave him the opportunity to blast his way to a weekend sweep.

“It means a lot to be able to be able to race with these guys like we do and to finally have the results that I feel like we should have,” said Erb. “Now, I am really looking forward to what the rest of the season holds for both me and my team.”

With the Chi-Town Showdown’s cancelling in observance of the World 100 at Eldora, there are now only two races left to settle the intense points battle between Mike Marlar, Chris Madden and Brandon Sheppard. The Dirt Track at Charlotte will serve as the battleground for what is sure to be two fierce nights of competition. Stay tuned to RacingJunk.com for all your dirt racing coverage.