The Chevrolet Performance U.S. Nationals are the Super Bowl of NHRA drag racing. Professionals, amateurs, fans from across the globe – they all travel to the Indianapolis area to enjoy six days of quarter-mile and 1,000-foot competition.

Because a lot is at stake for NHRA’s Mello Yello Drag Racing Series nitro competitors, it’s been a tradition for testing to occur for a couple of days the week before competition begins in earnest. This week, on Wednesday and Thursday, a bevy of Top Fuel and Funny Car denizens came to Lucas Oil Raceway to test and tune their cars in anticipation of winning the most prized Wally trophy in class, as well as preparing for the six-race Countdown to the Championship playoffs that ensue after this race.

There are still four spots open in the 10-car Countdown Top Fuel class as the regular season finale approaches. Only Antron Brown, who advanced to the finals at Brainerd last week, made the cut, leaving Terry McMillen, reigning champ Brittany Force, Scott Palmer and Mike Salinas as the balance of the top 10. In Funny Car only three slots remain, as 16-time champion John Force, class newcomer Shawn Langdon and veteran Tim Wilkerson round out the current top 10. How all of these racers perform in the U.S. Nationals will determine their fates for the Countdown.

Jack Beckman, whose second victory of the year at Brainerd catapulted him to fourth in the standings over teammate and three-race-winner Matt Hagan, led all comers on Wednesday during the first day of testing at LOR. As the Don Schumacher Racing (DSR) driver powered his Infinite Hero Dodge Charger R/T to 3,908 seconds on the 1,000-foot dragstrip, he was hounded by Bob Tasca III, not yet in the top 10 but surging when it matters, his Ford Performance Mustang hitting 3.958-sec.

Current Funny Car points leader Courtney Force drove to 4.185 on Wednesday as she works toward an initial Indy win. 2017 Indy winner J.R. Todd, who is tied with (as yet) non-winner Tommy Johnson Jr. at 987 points despite his two earlier-season victories, put together a 3.978-sec pass as the former Top Fuel standout works toward a repeat in this very important race. 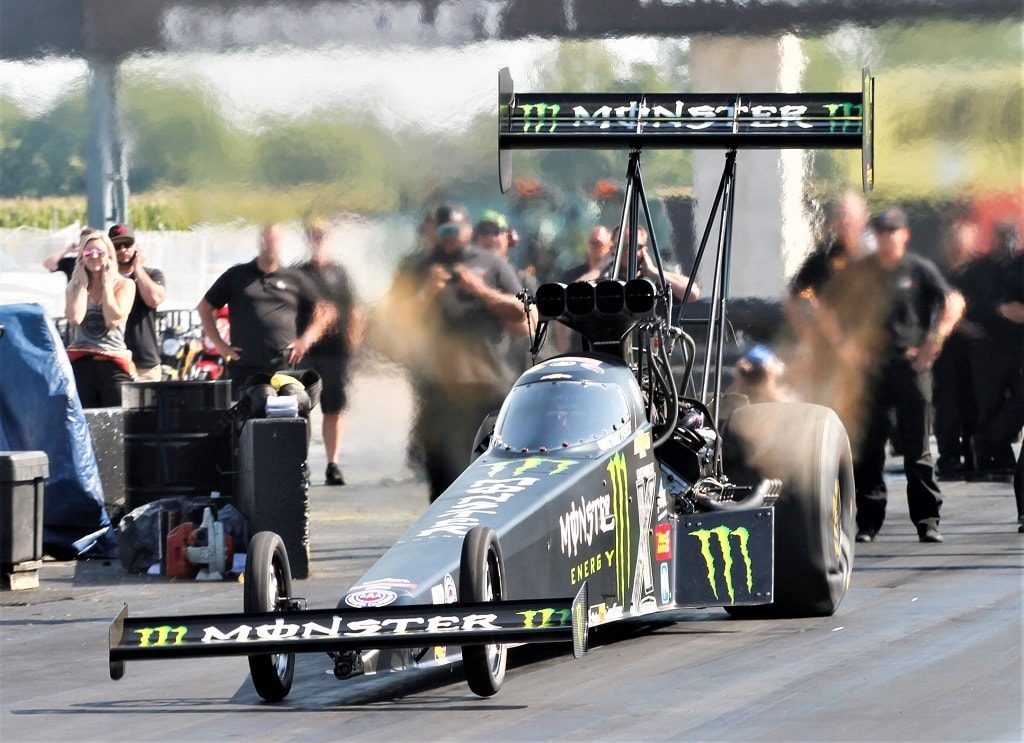 Also on Wednesday, eight-time world Top Fuel champion Tony Schumacher of DSR and John Force Racing’s Brittany Force stood atop the Top Fuel standings with identical passes of 3.791 seconds. Schumacher was a couple mph quicker than Force as the duo aim for a second 2018 victory.

On Thursday Brittany Force found her form, driving her Monster Energy dragster to the lead of the Top Fuel pack at 3.739 seconds with Schumacher in lockstep at 3.779-sec. Clay Millican, last year’s No. 1 qualifier at Indianapolis, was third at 3.979-sec, as the Tennessean looks to march toward a U.S. Nationals win. Currently third in the standings behind Steve Torrence and Schumacher, the latter having a single-point advantage, Millican is taking aim at a second-place result in the regular season.

Also on Thursday, Courtney Force jumped atop the Funny Car testing group with a 3.884-second run down the 1,000-foot track. Her John Force Racing teammate, and reigning flopper champ, Robert Hight, had the second-best run of the day at 3.898 as he vies for a second straight Funny Car championship. She leads the standings with almost 200 points in hand over 2016 titleholder Ron Capps; Hight is in third place, just 23 behind Capps. 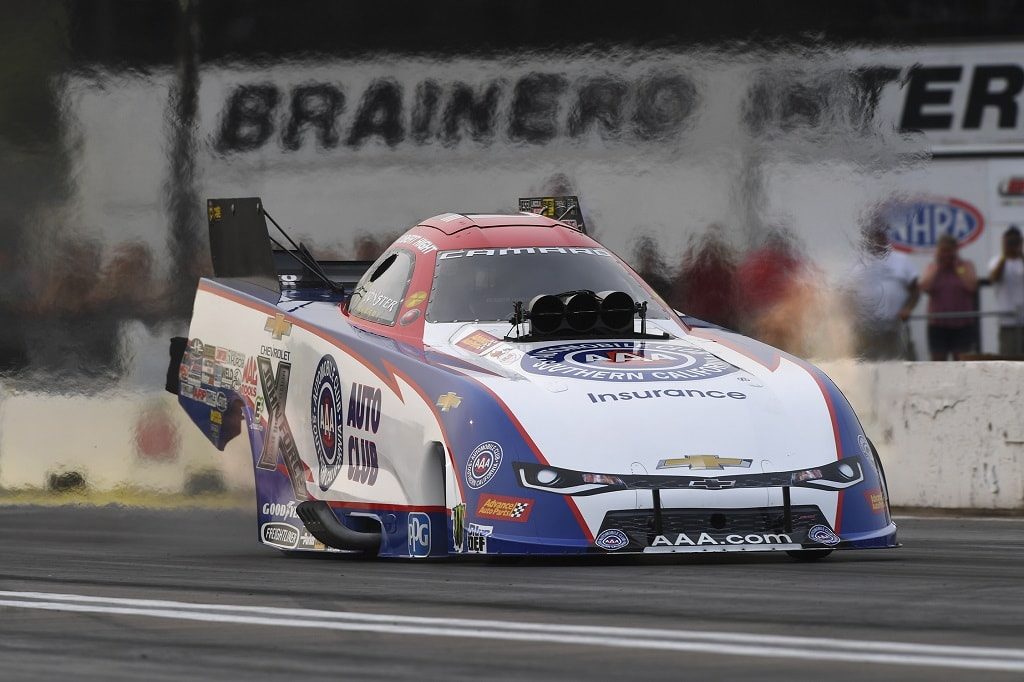 The Lucas Oil Raceway track will be silent until next Wednesday, when qualifying begins for the Lucas Oil Sportsman classes. First qualifying – there are five sessions at Indy – for the two nitro and two Pro Stock classes, begins Friday evening, with eliminations taking place on Labor Day, Monday, September 3.

About Anne Proffit 516 Articles
Anne Proffit traces her love of racing - in particular drag racing - to her childhood days in Philadelphia, where Atco Dragway, Englishtown and Maple Grove Raceway were destinations just made for her. As a diversion, she was the first editor of IMSA’s Arrow newsletter, and now writes about and photographs sports cars, Indy cars, Formula 1, MotoGP, NASCAR, Formula Drift, Red Bull Global Rallycross - in addition to her first love of NHRA drag racing. A specialty is a particular admiration for the people that build and tune drag racing engines.