RacingJunk News > Racing > Drag Racing > Phil Lankford and Gold Rush Inc. Put Money Where Their Mouth Is — On the Track

RacingJunk.com is the place to buy, sell and trade everything related to race and performance.  From our classifieds to our news to our advertisers and partners, RacingJunk is here to support the grass roots racer in all types of motorsports. As part of that, we wanted to celebrate our partners who are out there, hitting the tracks with their customers and clients.  Starting today, we will regularly feature drivers, engineers and crew chiefs who are also getting behind the wheel.

Next up in our series is Philip Lankford, President of Gold Rush Inc. Custom Trailers.  Unlike our last featured guest, Lankford came to the track via the business, and then got sucked in, as one is want to do. He spoke with RacingJunk about what it takes to really get to know the customer, and the race car.

Phil Lankford didn’t start out as a drag racer.  Seven years ago, he took over as President of Gold Rush Inc. Custom Trailers.  The company often attended race events including SCCA and NHRA events since a large part of its customer base is drag racing, particularly in the NHRA sportsman class.

While Phil had run the occasionally sports car race, it was the long narrow straight of drag racing that finally pulled him over the edge, plus the realization that to really understand his customer he had to switch from spectator to participant.

And thus a drag racer was born.

“I really made the decision from a customer-service perspective,” Lankford explains. “SCCA is fun, but a road racing event is 40-50 cars that are transient.  It’s great, but not as much of a community.  At any NHRA event – divisional or national — there are 600 cars and Gold Rush might have a couple hundred trailers in the pits. I looked around and decided we needed to be where the customer base was.”

That was three years ago. Today, Lankford races two cars –a a stock 2014 Copo Camaro and a 2007 Precision Dragster in the super comp and stock eliminator classes, respectively.

Lankford chatted with RacingJunk about making the transition to drag racing, and how it’s helped him better serve his customer.

RJ: What was the transition like for you as a driver?

PL: It’s very different racing (than Sports Car). It took a little getting used to.  There’s a lot more downtime, but that’s good for business. It’s a friendly atmosphere and you can really talk to customers between races.

In terms of getting into it, drag racing isn’t difficult to get started in. It’s expensive, but not physically difficult.  More and more runs make you a better and better racer.

RJ: What made you choose those classes?

PL: Because our goal is to spend time with customers, I wanted to have a car that was easy to maintain at the track and didn’t require a bunch of tear down at the track.  At the time, we’d done 4 or 5 trailers for customers with COPOs and I had a chance to purchase one.  Our customers, the COPO drivers, hooked me up with Chevy, which was looking to sell its demo car, I needed a turnkey car since I didn’t want to build one.  That COPO was the first one I entered in the race and here we are. 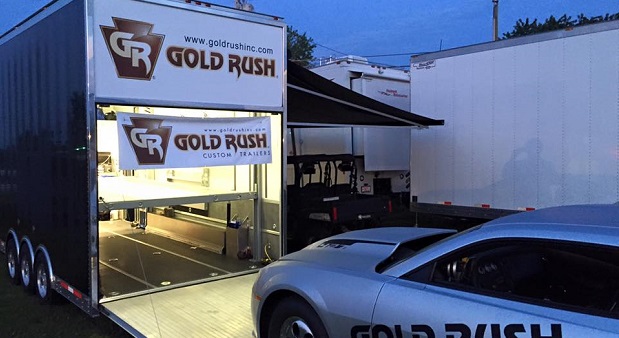 RJ: You must have liked it to not only keep going, but to add a second vehicle to the livery in a different class.

PL: When I added the second car, I’d been in the community for awhile.  I had realized that Stock/Super Stock was one group of folks and Super Comp/Gas/Street is another community. I wanted to get to know them both, and since we’ve got extra time on the track, we decided “Let’s get into that community as well.”

So I jumped across the fence.

RJ: Do you have a preference?

PL: If I had to choose, I’d probably stick with the Camaro. It’s the first car I got started with.  I also cracked it up a few weeks ago. It got loose on me at the finish line at the national event.

When I did get into an accident, it was a ride and not a terrible accident, but I never really felt in danger because of the safety equipment and because you’re strapped in so tight.  When I did hit the wall, (probably at 80 mph) the impact on me was insignificant enough that I was surprised at the amount of damage done to the car. Safety Safari comes out, and you see it.

RJ: Are you done for the season?

PL: We’re hoping to get the Camaro back out for Keystone or Maple Grove. We’re still running the dragster in the Lucas Oil races, and some of the national events as well.

PL: I’m a one man show at the track. I’m running both cars on my own.  I wanted to keep it simple, not to have a whole crew. But you can’t completely do it on your own, and anytime you have issues, that community really comes out to to help you. In turn, if you can help out, even though they’re competitors, you do what you can to help.

I’ve had engine problems, all sorts of problems, have a major body problem right now – dropped it off with a friend who’s a racer and we’ll sort it out.  People are eager to jump in and help with parts, assistance. This community is really a circle of friends.  I’ve had more issues this year than the past, and every time I’m amazed at the sense of community.

Plus, I do some light mechanical work, but I’m not an engine guy.  The engines are built by a shop,  and any significant maintenance is also done by others. I’m able to help diagnose the problem, but need to have someone to actually fix it.

RJ: How would you recommend someone getting into racing?

PL: Start with some training. When I started road racing, I did initially do some track events without it, but realized that professional training would help. I went to Bondurant and did a week’s training, got a ton of experience.

When I switched to drag racing, I’d never been in a ¼- mile vehicle. I went down to Frank Hawley’s and took his two day program.  He gives you a really good background in how to get the car down the track safely.  The school isn’t so much honing skills as how to be safe out there.  From there, you can take it further.  Get professional help and figure out how you can improve.

RJ: Since you got into this to help customers, what have you learned that can benefit them.

PL: I’ve now loaded my own equipment, parts, etc. I understand their needs from a mobile garage perspective, what works for them, what doesn’t. I know what they need to help build a trailer.  I fill my own trailer, I do stuff myself the same way they would. I know what a 30 ft vs 20 ft trailer will feel like behind the truck. I’ve been on the road just like they are.