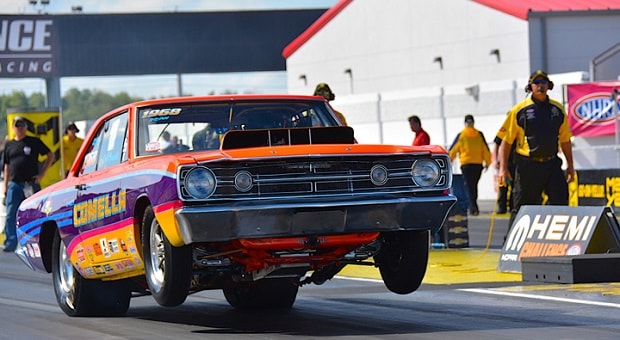 As denizens of the NHRA’s Mello Yello Drag Racing Series conduct two days of testing for next weekend’s Chevrolet Performance U.S. Nationals, the biggest and baddest drag racing gathering in the USA, remember that there are other important races being contested at Lucas Oil Raceway over Labor Day weekend.

One of those important events is the 18th annual NHRA Dodge HEMI Challenge, which the Dodge brand is title-sponsoring for the first time this year. There are 30 cars set to battle for the $15,000 winner’s purse, a record-tying entry list that comes from 17 states and two foreign countries.

Joining 22-year-old reigning champ Daniels in vying for the 2018 title is last year’s runner-up, New Brunswick, Canada native Wendell Howes, who is one of three Canadian competitors running at the vaunted Indianapolis-area track. Stephen Hebert, the 2016 runner-up, leads five drivers with Louisiana roots, the largest turnout from a single state. There are three Ohio and Pennsylvania competitors on the entry list. A total of 21 Plymouth Barracudas square off against nine Dodge Dart entries.

All of the NHRA Dodge HEMI Challenge competitors will park together in the Lucas Oil Raceway pit area. All drivers in the 16-car eliminations receive cash awards. Prior to the start of Friday eliminations, Dodge has scheduled a parade of entered competitors, while the final round to crown a 2018 champion is scheduled for prime time Friday night, prior to the NHRA nitro qualifying.

These two models, the Dodge Dart and Plymouth Barracuda Super Stockers, are among the earliest and most iconic iterations of the purpose-built vehicles created at and by the factory. They feature distinct race packages and are for use solely on the drag strip. They are precursors to the current-day Mopar Dodge Challenger Drag Pak used in Factory Stock Showdown.