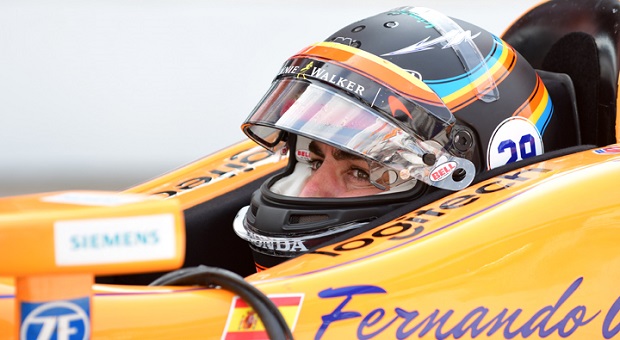 Verizon IndyCar Series entrant Andretti Autosport, who teamed with McLaren to run two-time Formula 1 champion Fernando Alonso in a Honda-powered Indy car during the 2017 Indianapolis 500, have scheduled a road-course test for the Spanish driver at Barber Motorsports Park on September 5th.

Alonso, through McLaren, announced earlier this month he would not return to the F1 series in 2019; McLaren CEO Zak Brown has been looking for an appropriate full-time seat for Alonso in the IndyCar Series next year, and has been in talks with Andretti Autosport owner Michael Andretti. Although McLaren no longer runs Honda engines, Honda Performance Development (HPD) president Art St. Cyr has stated no objection to the upcoming test.

“Fernando Alonso is one of the premier racing drivers of this generation, and we very much enjoyed working with him at the 2017 Indianapolis 500,” St. Cyr stated. “He has shown that he can be very competitive right off the bat, and it would be great for INDYCAR if he were to decide to drive here full-time after his F1 career. Having Alonso as a driver would be an obvious benefit for any team or manufacturer.”

Honda has a majority of the top-line Verizon IndyCar Series entrants in its camp for the 2018 campaign; Team Penske leads the Chevrolet runners and claimed the 102nd Indianapolis 500 with Will Power this May. It’s been rumored Andretti could strike a deal for Alonso to race with Harding Racing – which runs Chevrolet power – as a satellite team, with a teammate to be selected. According to racer.com’s Robin Miller, such a team could include Andretti Autosport crew.

HPD and St. Cyr will have to evaluate their options after this test is concluded. “Our engine lease agreements are made between HPD and specific teams. Several of our current IndyCar Series teams already have agreements in place with HPD for the 2019 season, and we have been operating air near maximum capacity all year long to properly provide powerful, reliable engines for all our teams.”

More tellingly, St. Cyr acknowledged that HPD has had “discussions with several current and potential teams for 2019 and those discussions are ongoing.” It remains to be seen whether HPD would continue to feature Andretti Autosport as one of Honda’s flagship teams should they develop a satellite operation with a Chevrolet-powered squad.