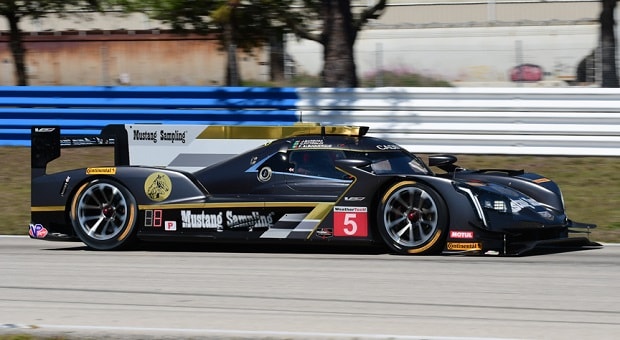 Christian Fittipaldi first came to the United States in late 1994 to test for a CART series drive. He was driving at what was then Firebird East outside Phoenix, Arizona and was full of fun and games. He was also one heck of a quick racer and quickly found a home, first with Walker Racing for a single season and then a far longer tenure with Newman/Haas Racing.

Before his arrival on these shores, the Brazilian nephew of Emerson Fittipaldi had 40 starts in Formula 1 with Minardi and Footwork; he was looking for a new, better start in his Champ Car career and certainly found it, earning two victories and 20 podiums from 1995-2002. Although Fittipaldi never won a championship in CART, he always ran consistently in the sharp end of the field. In his first Indianapolis 500 start, in 1995, Fittipaldi’s second-place result earned him rookie honors.

Prior to joining CART, Fittipaldi won the 1993 24 Hours of Spa and the 1994 Brazilian 1000 Miles race. That set the stage for the driver’s latest incarnation, racing sports cars in America. His first attempt to win the Rolex 24 at Daytona in 2003 resulted in a sixth-place result for the Bell team, running a Doran-Chevrolet. He was part of the team when they won the midwinter classic a year later, this time with a Doran-Pontiac.

Christian Fittipaldi went into full-time sports-car competition in 2006, racing the Grand-Am Sports Car series with Eddie Cheever Jr.’s team. He arrived at his current home, Action Express Racing in 2011, and took the third-place podium step at Daytona that year, racing a Riley Mk Xi-Porsche. The team would change to the Coyote Corvette DP in 2012 and, in 2014 they earned the initial IMSA WeatherTech Sports Car championship, as well as the Rolex 24 at Daytona.

Fittipaldi has been an integral part of Action Express ever since and gave up full-time competition in 2018. He announced last week that the next, 2019 Rolex 24 at Daytona will be his final foray behind the wheel. He had substituted this year for Joao Barbosa, who suffered training injuries at mid-season. As a three-time Rolex 24 at Daytona winner – he won again this year – Fittipaldi will attempt a fourth triumph, driving the No.5 Mustang Sampling Cadillac DPi in this tough race, and then hang up his helmet.

Now sporting director for Action Express, Fittipaldi noted, “Everything in life has a beginning, middle and end – and I am at the beginning of the end of this stage of my career and competing at this level. All I can say is that it has been an awesome trip. Thank you to mom and dad, and to my whole family. Without them I couldn’t have had the opportunities that I have had all through my career. My wife and daughter have given me so much motivation, especially in the later stages of my racing career.”

Next year’s Rolex 24 will be Fittipaldi’s 14th start in the midwinter classic and his ninth with Action Express. In addition to his three Daytona victories, Fittipaldi helped Action Express earn the 2014 and 2015 IMSA championships as well as four consecutive North American Endurance Cup titles. He transitioned into the role of sporting director ahead of this year’s campaign, racing in the endurance events while also being on-site for each sprint race.

Fittipaldi has been part of the performance engineering effort for the team and serves as a liaison with team sponsors. “To IMSA, thanks for all the great opportunities. Jim France has once again built something really incredible and has been key to making everything happen, from his original vision to this great upward part of growth. This is an amazing paddock with very strong teams, so many manufacturers and great tracks on the entire schedule. To Cadillac and [engine-builder] ECR, thank you for all the horsepower and downforce.”

Christian Fittipaldi races next in the season-ending Motul Petit Le Mans as he looks to take yet another North American Endurance Cup title. He will take part in the Roar Before the Rolex 24 and the race itself. It should be an emotional ride.