The Artie’s Party Cruiser, initially intended to be auctioned off at a special sale at the 2018 PPG Syracuse Nationals, will get to go on a longer road trip. The Saratoga Springs Auto Museum, in partnership with the Saratoga Auto Auction, stepped up to put the car on the block at their annual event September 21-22, 2018.

The 1964 Pontiac Safari Wagon was donated to Artie’s Party for striping and customization by George and Mary Munsterman from First Class Productions. First Class was unfortunately not able to hold the Syracuse auction as planned, but the gorgeous cruiser is still all ready to roll and raise funds for the Ronald McDonald House of Central New York. Before going up for sale, the Cruiser will appear at a number of shows, including the Syracuse Nationals, Dead Man’s Curve, the Adirondacks Nationals and the Lake George Concours D’Elegance. It’s a truly remarkable kustom creation, so it’s well worth seeing for any auto enthusiast. That first is perhaps the best event at which to see the Cruiser; “Big Al” Liebmann will be in attendance with the Frantic Ford, and it’s also the site of this year’s Artie’s Party Charity Panel Jam.

“We couldn’t have done this without Joe Quitoni and the crew of Joe Que’s Auto Body,” says Art Schilling, founder of Artie’s Party. “And we owe a debt of gratitude to George and Mary Munsterman for the vehicle, as well as our amazing sponsors, for everything they’ve donated to make this the koolest kustom.” 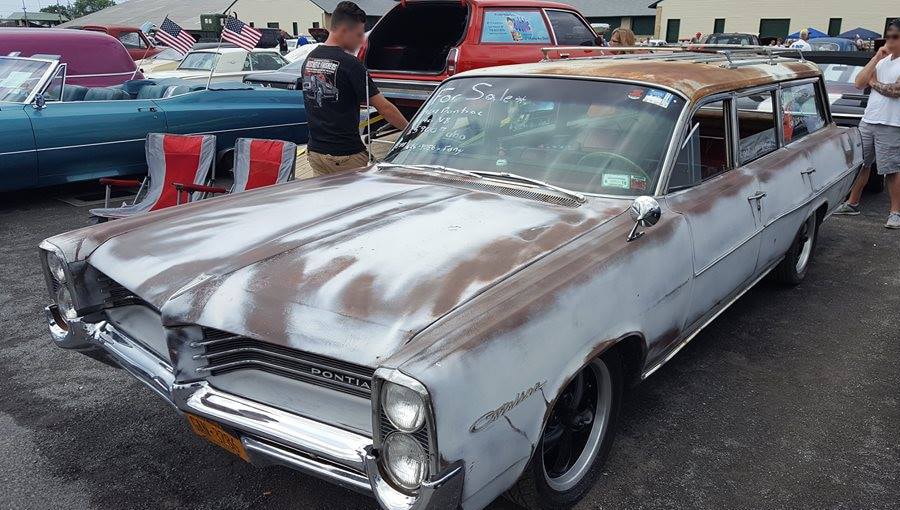 The customization goes deep; it includes new chassis components and a disc brake conversion from Ames Performance, new springs from Detroit Spring, a motor built by Jasper Engines and a transmission from Joe Pirrone. Gillian’s Upholstery is handling the refurbishing of the interior, turning this Pontiac into a surfing Safari by upholstering the seats and interior with the Pendleton plaid wool fabric made famous by the Beach Boys.

To see the Artie’s Party Cruiser in person, check out one of the following events: