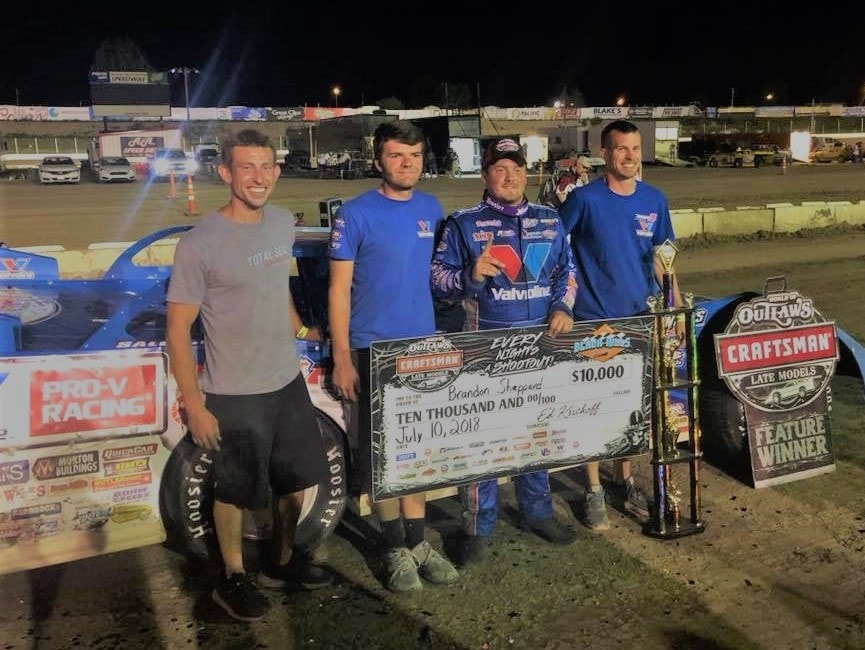 The Rocket Man of the World of Outlaws Craftsman® Late Model Series was back at it last night at Black Hills Speedway. Continuing on a hot streak that began almost three months ago, the No. 1 of Brandon Sheppard and his Rocket1 Racing team were once again back on top at the Series most western stop of the 2018 season.

After collecting three wins at the Series last four events, the defending World of Outlaws Championship team ran away with Tuesday night’s Sears Craftsman Feature. Despite starting third for this 50-lap race, Sheppard challenged polesitter and reining race winner Rick Eckert side-by-side for the first 19 laps of the 50-lap shootout. On lap 20, Sheppard secured the pass for the lead and put his nickname to good use.

At one point even holding a more than five-second lead ahead of the 15-car field, Sheppard used the speed found in his No. 1 Rocket1 Racing team dirt track rocket to earn his eighth win of the 2018 season.

“We had a really phenomenal car tonight,” said Sheppard. “It was a lot of fun to drive and the racetrack ended up being really racy. You could drive all over it… It was one heck of a race. Lapped traffic was tricky and then the track started to take a lot of rubber but all-in-all we had a fast car, which helped me get the job done here.”

Sheppard wouldn’t be the only one to have something to celebrate following Tuesday’s feature race at one of the toughest tracks on WoO Series circuit.

“We have had some bad finishes here that have cost us,” said President of Rocket Chassis Mark Richards. “Fortunately, that all changed after this race and I am looking forward to seeing what our driver and team can do for the rest of the season.”

Following his eighth win Sheppard and his Rocket1 Racing team currently sit third in the point standings, just 34 points shy of a tie for first between Chris Madden and Mike Marlar.