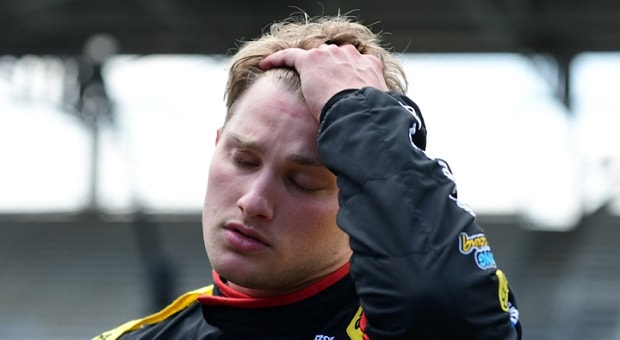 Five years ago, Sage Karam arrived at Indianapolis Motor Speedway to race in the Indianapolis 500 for the first time. He was cocky, had just turned 18 years old and was about to graduate from high school.

Karam, who won the Indy Lights championship in 2013 with Schmidt Peterson Motorsports, raced his first Indy 500 with Dreyer & Reinbold Racing (DRR), finishing ninth in an inspired drive from 31st on the traditional 33-car grid. The Nazareth, PA-born racer had been loaned to DRR from Chip Ganassi Racing, for whom he drove during the 2015 Verizon IndyCar Series season, splitting time in Ganassi’s No. 8 car with Colombian Sebastian Saavedra.

After his accident from the lead at Pocono that year, an accident that claimed the life of veteran Justin Wilson, there was no longer space for Karam at Ganassi’s team and he ended up driving a Lexus RC F GT3 for 3GT Racing after serving as the team’s test driver in 2016. 3GT made their debut at the 2017 Rolex 24 at Daytona as a factory supported team; Karam’s best class finish was fifth at Mosport, aka Canadian Tire Motorsports Park.

Throughout his sports car dalliance, Karam returned to the Indianapolis Motor Speedway and the 500, racing again in 2016 and 2017 for Dreyer & Reinbold, albeit without the success he had in his first Indy 500 contest. Will the fifth time be the charm for this group?

Sage Karam will, again, be driving the No. 24 black and gold Chevrolet-powered UAK18-fit Dallara for DRR, returning with support from Wix™ filters and Mecum Auctions. He’s coming into the race – after not racing any vehicle since last fall – with a more mature attitude. 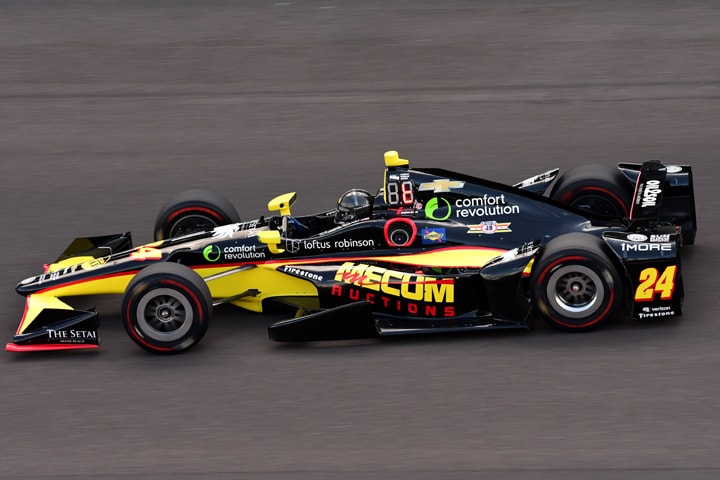 “I seem more relaxed and calmer this year coming to Indy,” Karam said. “So, I’m always excited to come to the Indianapolis Motor Speedway, but this time, I’m coming into the month of May with the thinking of a veteran.” A 23-year-old veteran.

“This year I have a teammate in J.R. (Hildebrand, driving the No. 66 Salesforce/DRR Chevrolet), and we believe we can work together to develop a good car for the race. The last few years we have been a single-car effort. Now, with two cars, Dreyer & Reinbold Racing has put together a strong group to battle for the win.”

Karam’s much more relaxed attitude has impressed team owner Dennis Reinbold. “From the first race in 2014 with our team, you knew Sage had sensational talent. And we also knew he was young and too aggressive at times,” acknowledged Reinbold, who has qualified 37 entries at Indy as a team owner.

“I see a different young driver coming to Indy this year. Sage has worked very well with our engineering staff (led by veteran Jeff Britton) and our crew for the past few years, and the race performance has shown that. We have had the speed most of the time and Sage has moved to the front.”

Karam’s drive from 31st to ninth in his first year at Indy would have earned him Rookie of the Year honors had it not been for the appearance of NASCAR racer Kurt Busch, who finished sixth. He was named the “Hard Charger” of the race that year. In 2016, Karam came from 23rd to fourth before the halfway point, but then a mishap took him out. In the 101st edition of the 200-lap enduro, he went from 21st to tenth before a mechanical issue sidelined him.

“Now he shows that he is a calculated young driver who has the experience to race with the leaders,” Reinbold continued. “With Sage and J.R., I’m excited about this combination this year in the 500.”

Hildebrand, looking to qualify for his eighth Indy 500, has watched Karam’s maturation over the years. “Sage has done a pretty good job on his own for the past few years,” J.R. said. “You can see from a distance that he has gone through a learning process, too. Sage has shown that he can perform and, when things come together with a good race car, that he can go very fast.”

Karam, Hildebrand and the balance of the 35 entries for this year’s 33-car grid, hit the historic Indianapolis 2.5-mile oval on May 15-18 to prepare for qualifying scheduled Saturday and Sunday, May 19-20. The 102nd Indianapolis 500 is set to take the green flags on May 27 at 12:15PM EDT. It’s shown live on ABC for the final time, everywhere except Indianapolis.