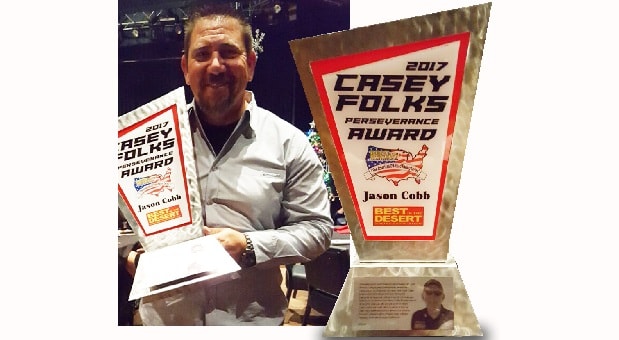 The “Casey Folks Perseverance Award” has been created as a new annual award for Best in the Desert’s 2017 year end awards, providing a neat finish for the best year for entries in the organization’s history. The award honors hard work, dedication, integrity and most importantly perseverance in a participant.

The award’s namesake, Casey Folk, was a man of his word who would persevere through anything to honor his commitments. He encountered many challenges in his life, and chose to face them head on rather than backing down or taking an easy path out. His motto was “Lead, follow or get out of the way,” and he usually chose the first option. He lived the adventure of a lifetime, and this trophy represents the excellent attributes which that life, and Casey’s legacy, exhibit.

The first recipient of this award is Jason Cobb, who has stood as one of Best in the Desert’s most ardent supporters for many years. He experienced a series of serious health issues, including cancer, but with the help of his supportive family (including his wife Gretchen and son Josh, who is a successful racer), he persevered and is now, fortunately, cancer-free. While struggling through his health problems, Jason lost two jobs within the industry, but he pushed through it to become the proud owner of Trophy Lite.

The Best in the Desert organization and family wish to thank Jason for his involvement, and wish him the best of luck in his Trophy Lite adventure and all future endeavors.