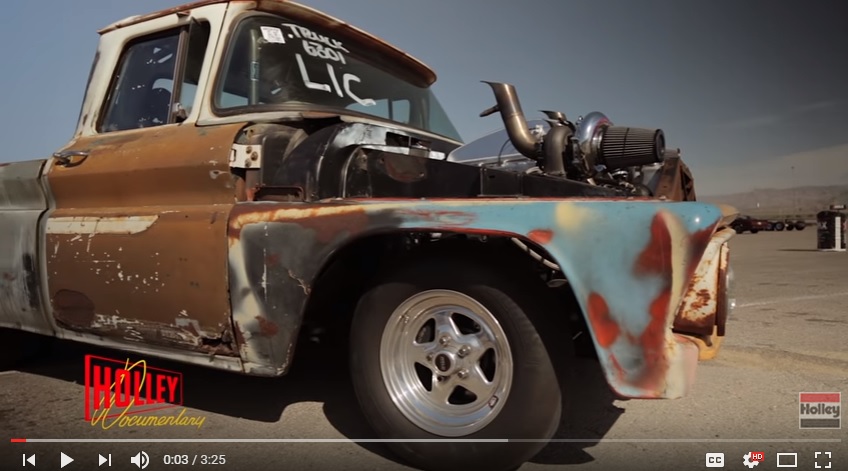 The video below features Griffen Steinfeld from Southern California and his buddy’s Chevy C10, which he brought to Vegas to run on the strip in the LS Trucks class.  He swapped the engine from his ’56 Chevy Apache into the C10, and was on his way.

Steinfeld brings a competitive spirit to the endeavor, as well as some last minute licensing paperwork.

“Whatever it takes to beat the person next to me. Low boost for this thing is eight, nine pounds, and that’s where it did the 950 pass. It has no choice but to go fast.”

He’s modified the C10 with a variety of products, including a Holley throttle body and regulator, and he’s got high hopes for the truck to make big power, and powerful passes.

“Holley makes some great products – this is their 95 millimeter throttle body with a low RPM taper, which is a nice little thing to add, especially since this thing is street driven. I also have the Holley high-ram lower half of the intake, the base. I pulled it out of the box, it fit perfectly – it just works. Holley fuel pressure regulator… Love having their products on my truck.

“It’s just a nothing special combo, really, it’s – all these parts on my truck you could buy off a shelf, and there’s no magic going on, it’s just it’s a pretty light truck. That’s why I don’t really necessarily need the crazy horsepower to go fast. With today’s standards, a thousand horsepower’s the new 500 horsepower. It’s pretty ridiculous how easy it is to make big power.”

Steinfeld was only one of many LS-enthusiasts who brought their rides, and their A-games, to Vegas to showcase the most popular crate engine out there.